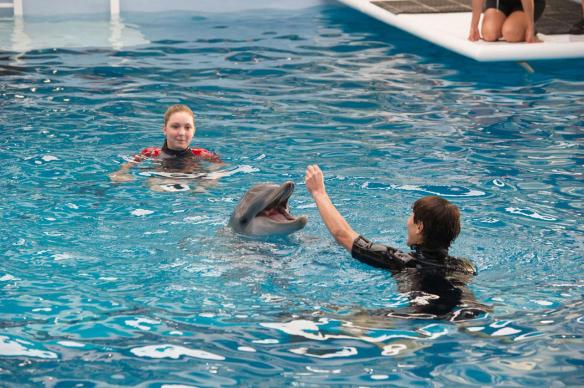 Life is a splash!

The inspirational story of Dolphin Tale introduced us to Winter, a dolphin rescued by the Clearwater Marine Aquarium whose tail had to be amputated after being caught in the wire from a crab trap. After being fitted with a prosthetic tail, she became an inspiration to disabled persons everywhere – and to a lot of non-disabled people as well.

Now Winter is in a different kind of trouble. Her long-time companion at the Aquarium has passed away and she has fallen into a deep depression, even lashing out and injuring her friend Sawyer (Gamble) who has been with her from the beginning. Sawyer is now a handsome high school teen whose relationship with Winter has not gone unnoticed by the marine biology community – he’s been invited on a semester at sea program normally limited to college students. It’s quite a big deal and everyone expects him to go but Sawyer is conflicted; he doesn’t want to leave with Winter in serious difficulties.

Winter has become a big attraction for the CMA which has embarked on an ambitious expansion program led by their new board head Philip Hordern (Nowicki)  who is concerned that the star attraction might be taken away. In fact, USDA inspector (Smith) has given the aquarium 30 days to pair Winter with another female dolphin or the government will force them to move her into an environment where she can be properly socialized.

It so happens that the CMA has a female dolphin that they’re taking care of, but Dr. Clay Haskett (Connick) seems reluctant to pair the two. His reasons for it are correct though – the dolphin they have rescued is making a full recovery and there is no reason to keep the perfectly healthy dolphin at the aquarium whose mission has always been Rescue, Rehab, Release. Clay’s hot-headed daughter Hazel (Zuehlsdorff) is furious at her father whom she sees as abandoning Winter, but also disrespecting her for not soliciting her input. Because she has a PhD and everything, right?

So the dolphin will be released and Winter will be moved. Sawyer mopes around and despite the advice of his mom (Judd) and curmudgeonly Dr. McCarthy (Freeman) who designed Winter’s appendage still doesn’t know if he wants to seize the day. But the thing is, where there’s life, there’s Hope.

This isn’t quite as good as the first Tale. It’s a bit more convoluted and a bit more cliche, with the kids more or less running the show and the adults generally treating them as equals. In that sense, the movie doesn’t talk down to its audience although there’s not a lot of reality here – teens and tweens aren’t generally handed the reins of an operation the size of a CMA, particularly when the welfare of animals are concerned.

Gamble has matured into a handsome young man which is sure to set a lot of hormonal tween girl hearts a-flutter. Zuehlsdorff is a bit shrill in places but manages to capture the child-parent conflict pretty solidly and allows herself to come off as illogical and overly emotional in a situation when her father is thinking of the welfare of the animal above his own personal needs. It’s a good life lesson.

In fact, the movie is filled with them. There’s a whole lot of information on the various marine animals depicted here which in addition to the dolphins includes sea turtles and Roofus, the zany pelican from the first movie who is even more present here. In fact, Roofus gets more screen time than Judd or Freeman. Take from that what you will.

The adult cast is solid and the look of the film sparkles. Yes, there are some CGI dolphin moments and occasionally those moments are obvious but for the most part this is a good looking movie giving a very alluring quality to Florida in general. Being familiar with the Clearwater area, I can tell you that it captures the area nicely.

The movie can be a little bland in places. The filmmakers wanted the movie to be wholesome and for the most part it is to the point where it’s so inoffensive that there’s nothing to really hold onto. There are no antagonists to speak of; it’s just a bad situation which is the way life generally is. There are appearances by surfer Bethany Hamilton as herself – you might know her from Soul Surfer, an inspirational movie made on her own life – and whose presence on the current season of The Amazing Race is likely to boost up the box office here a little bit.

I honestly can’t fault the movie much. It doesn’t do anything truly wrong, it just doesn’t really excel either. For the most part, I can give it a mild thumbs up for family audiences. Those without kids may find it mildly diverting particularly if they love dolphins but adults may find the movie tedious. Watching the dolphins do their thing is definitely the best part of the movie. The humans around them – not so much.

REASONS TO GO: Some moments of grace, particularly when the actual dolphins are involved. Wholesome.
REASONS TO STAY: Ham-handed kids movie cliches. Lacks realism. Bland.
FAMILY VALUES:  There is some mild dolphin peril but otherwise suitable for all family audiences.
TRIVIAL PURSUIT: This is the fifth movie in which Judd and Freeman have appeared together in.
CRITICAL MASS: As of 10/3/14: Rotten Tomatoes: 69% positive reviews. Metacritic: 58/100.
COMPARISON SHOPPING: Hoot
FINAL RATING: 6/10
NEXT: Dead Silence