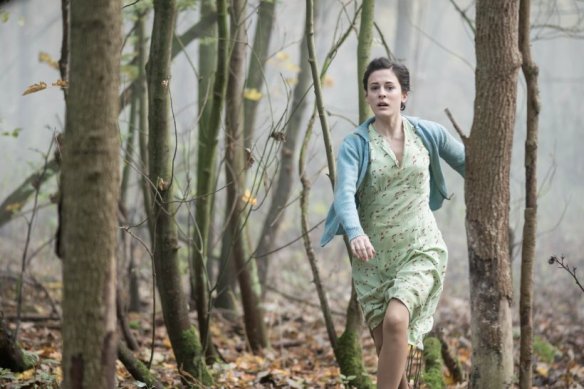 Phoebe Fox out for a brisk walk in the woods.

There’s kind of an unwritten law that sequels to horror movies tend to be less scary and of a lower quality than the originals. Hammer Films, the classic British horror factory however has been the exception to that rule for the most part, churning out Dracula and Frankenstein sequels that are just as good if not better than the originals. Would that record hold in the latest incarnation of the studio?

Taking place 40 years after the original Woman in Black with the Second World War in full bloom with the London Blitz in particular at its height. With the constant nightly bombing, the decision was made to evacuate as many children as possible out to the country and a group of school children with their principal  Jean Hogg (McCrory) herding them much like a shepherdess if given an unruly mob of sheep and one of her teachers, Eve Parkins (Fox) to assist.

There is another Nazi raid the night before they are to leave and a direct hit to a nearby house leaves young Edward (Pendergast) an orphan. Rendered mute by the experience, he resorts to making sinister drawings which in turn draw out the cruelty of some children, the sympathy of others with the impatient and imperious Jean leaning towards the suck-it-up school of grief counseling. She is married to a Brigadier General, after all.

Of course with shortages in places  in safe places to stay, this particular group is sent to Eel Marsh House, home of the Woman in Black (Best) who still rages and haunts there after her son was taken away from her forcibly and later drowned. Now, she seems to be enraged at the children in the charge of Ms. Hogg and Ms. Parkins, although Edward seems to be a favored target and Eve’s own maternal instincts are flaring up like the hair on a dog’s back. However, Eve has secrets that have drawn the Woman in Black to her.

I have to say that the first film had much more atmosphere and better scares than this one, which has some good ones but not nearly as many. Whereas the first film was generally dark and gloomy, this one is brighter although just as fog-shrouded with the occasional rainstorm. Odie Henderson of RogerEbert.com suggested that the film would have been better off had it been filmed in black and white and I can’t say I disagree with him. In fact, it would have been a capital idea.

Whereas the first film had Daniel Radcliffe turning in a solid performance, the cast of lesser known Brits (at least in this country) do workman like jobs, although McCrory some might remember from the Harry Potter series (like Radcliffe) has some moments and Jeremy Irvine, who plays a dashing English pilot with secrets of his own, has others. Another thing missing from the first is the village of the suspicious people which has been changed to one single demented resident (Dennehy). Doesn’t quite feel the same.

Maternal guilt is a big theme here, particularly Eve’s and it is an interesting twist of normal horror conventions that the children are a means to an end – that end being punishing Eve. However, rather than further exploring that theme, the filmmakers are content to replay the same flashback over and over again, trying to be cryptic I suppose but only a dimwit would fail to realize that the dreams are about a traumatic experience in Eve’s life and why the Woman in Black is drawn to it. Perhaps showing how the event effected Eve’s life and brought her to her teaching position may have been a better use of the filmmaker’s efforts rather than replaying the same scene over and over again. That’s just lazy filmmaking.

This isn’t a bad film at all, although true horror fans might find it a bit lean on scares and atmosphere. However, the film is reasonably well-made and has enough going for it that I can give it a mild recommendation which for films released this time of the year is like gold.

REASONS TO GO: Some great views of misty marshes. Explores maternal guilt. Some effective scares.
REASONS TO STAY: Not enough of those effective scares. Lacks a truly creepy or scary mood. Performances are merely adequate.
FAMILY VALUES: There are definitely some frightening images, as well as kids in peril. Not a lot of gore or foul language, some of the thematic elements are on the adult side.
TRIVIAL PURSUIT: This is the first sequel to be produced by Hammer Studios since 1974, although none of the events of the first film is referred to in this one, nor do any cast members return.
CRITICAL MASS: As of 1/17/15: Rotten Tomatoes: 22% positive reviews. Metacritic: 42/100.
COMPARISON SHOPPING: The Legend of Hell House
FINAL RATING: 6/10
NEXT: Unbroken