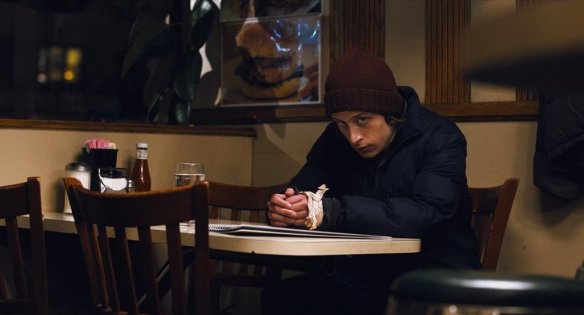 Are you looking at me?

We know so little about the human mind. What makes it tick, how it processes information, what causes it to malfunction, we really only have an inkling of the mysteries of the brain. We try to help those who have issues with their mental faculties, but really it’s all just stabs in the dark.

Gabriel (Culkin) is taking a bus. He seems friendly enough, although there’s something a little off about him; a little jittery perhaps, or a sense that he’s trying too hard to fit in. In any case, when he arrives at a small college in Connecticut looking for his girlfriend, we think that he’s just trying to visit his girl until we realize that the address he has for her is years out of date. When he finally finds her home address, his frustration that she doesn’t answer the door leads to a brief outbreak of violent behavior leads to our sense of unease about the kid.

Then we find that he wasn’t supposed to be there; he was supposed to be heading home to his family – brother Matthew (Call), a straight-arrow sort who is doing his best for his baby brother and is ready to introduce his fiance Kelly (Rasmussen) to him, and his mother Meredith (O’Connell) who is frenetically protective of her son, checking up on whether he has taken his medication as if he were a seven-year-old.

It is no wonder that Gabriel chafes in this environment, so at his first opportunity he runs off, still in search of his girlfriend Alice (Meade) whom he think will solve all his problems and make his life the perfect thing he always imagined it would be. There are obstacles in his way however, most of them of his own making. For one thing, the only one in his family he trusts as all is Nonny (Cohen), his grandmother and she is in the City (New York, for those wondering). For another, he’s not exactly sure where Alice is spending the winter break. One thing is certain; he doesn’t want to go back to the institution where he had just been released from. He very much wants his freedom.

There is a small coterie in Orlando who are in the know about something called the Uncomfortable Brunch. It takes place at a bar called Will’s Pub on a Sunday morning once a month and during the brunch they show a movie, generally one that is difficult to watch or raises feelings of unease. Those familiar with that event will understand when I say that this is the perfect movie for it.

First-time director Howe pulls no punches, basing the movie on his own experiences with a college roommate who was a diagnosed schizophrenic. This isn’t a movie that is so much a journey as it is a descent, for as Gabriel refuses to take his meds and becomes more and more in the grip of his own obsession, we see him become less and less likable and more and more dangerous to himself and others.

Culkin delivers the performance of his career to date and marks himself as a serious actor to be reckoned with. The intensity of his gaze from under the wool cap that his character wears constantly (an inkling of which you get from the photo above) grows more and more focused even as he himself does not. We get the sense that there’s something not quite right about Gabriel and it isn’t just the various tics and mannerisms. It’s the unpleasantness (I wrote in my notes as I watched this that there was nothing wrong with him a good punch in the face wouldn’t cure, although of course that’s far from true and not one of my shiniest moments) of the character, the sense that he is capable of anything and his overall unpredictability that make him feel like a ticking time bomb. One feels watching Gabriel that this movie isn’t going to end well for somebody, and it may be someone besides Gabriel who is the victim.

The movie is bleak looking as well; there aren’t a lot of warm colors in the cinematographer’s palate here; a lot of blues and grays and whites. That it is set during winter is not an accident; that contributes to the overall bleak feel of the movie. There are also a few nagging questions I had about just what was going on; where, for example, did Gabriel get the money for the bus tickets he buys?

This isn’t easy to watch in many ways but to its credit the movie will get a reaction from you, even if it is an unpleasant one. The world needs movies like this one, if only to remind us that the world isn’t the same for everybody and some folks who may not be the most pleasant to be around are grappling with demons that the rest of us can never understand or relate to. Only their families will have some sense of the hells they live through and sometimes, they’re so busy going through their own hells in dealing with theirs that they lose sight of that.

I can’t say that I’d recommend this movie for everyone – not everyone wants or needs a downer of a film when they’re looking for a movie to watch. However, despite my somewhat lukewarm review, this is a movie that has a lot going for it and for those looking for something a little different and a little more challenging, this is definitely one you should consider.

REASONS TO GO: Culkin is scintillating. No punches pulled view of mental illness.
REASONS TO STAY: An hour and a half spent with someone you’d probably rather not spend an hour and a half with. A bit too bleak for some.
FAMILY VALUES: Some violence and foul language.
TRIVIAL PURSUIT: Much of the movie was filmed in the Hamptons.
CRITICAL MASS: As of 4/21/15: Rotten Tomatoes: 100% positive reviews. Metacritic: no score yet.
COMPARISON SHOPPING: Spider (2002)
FINAL RATING: 5.5/10
NEXT: The 100-Year-Old Man Who Climbed Out a Window and Disappeared