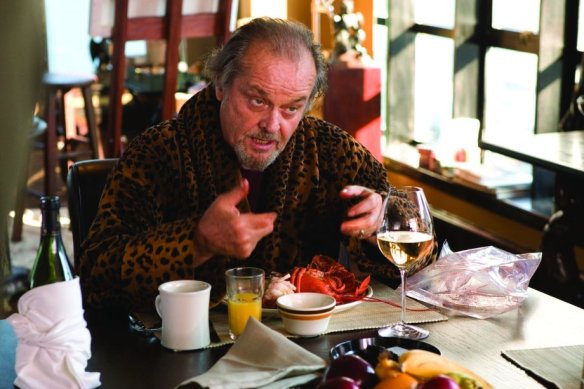 You talkin’ to me?

In Boston, Frank Costello (Nicholson) is king – the king of hoods. He is the most powerful mob boss in the city and he has his corrupting fingers in just about every civic institution. One of his most important pieces is the mole he has in the police department, Colin Sullivan (Damon). Recruited as a youngster, the squeaky-clean choirboy type Sullivan went through the police academy with flying colors and serves under Captain Ellerby (Baldwin) and using his intimate knowledge of ongoing investigations of Costello is able to move Costello’s assets around the city so that the crusty old mob boss doesn’t get caught with his pants down.

Captain Queenan (Sheen) of the BPD wants to catch Costello in the worst way and he knows he needs to send someone deep inside to do it. Billy Costigan (di Caprio) is the perfect undercover; a Southie with a history, and family ties to the Mob, Corrigan turns out to be a perfect fit. However, before long both Queenan and Costello begin to realize that their organizations have been infiltrated. Now begins a cat and mouse game to find the moles; the stakes are life and death for Costigan and Sulliva, as well as for those around them.

The Departed is a fairly faithful remake of the Hong Kong thriller Infernal Affairs and will be remembered if for nothing else but as the movie that won Martin Scorsese his first Oscar for Best Director. There are those that grouse that it is not his best movie (it isn’t) but it was deserving nonetheless; the movie is certainly one of Scorsese’s best works.

Part of what makes it work is that this movie is as tense as any I have ever seen. From the moment that the two opposing forces discover that they have a rat in their midst the race is on to discover who it is and the fact that we end up rooting for both Sullivan and Costigan makes the tension all the more intense.

Another factor in the movie’s success is that the film is chock full of memorable characters, cast with stellar actors who deliver incredible performances. Both Damon and di Caprio are at the top of their game, and Nicholson delivers his best performance since he snarled at Tom Cruise that he couldn’t handle the truth in A Few Good Men.

The supporting cast is just as amazing. I think Mark Wahlberg came into his own with his portrayal of the foul-mouthed Lt. Dignam, Queenan’s right hand man. Ray Winstone is menacing and unforgettable as Costello’s enforcer, Mr. French. Vera Farmiga showed her star power in her role as Madolyn, the police psychologist who enters into relationships with both Costello and Corrigan as well.

There is a ton of violence here (which is a Scorsese trademark), perhaps too much for some. There is also a whole lot of profanity – there are more F bombs (or variations thereof) for any Best Picture winner in Oscar history. Those who are sensitive to such matters, take heed.

Good as this is, the source movie from Hong Kong is just as good. While it can be seen with subtitles, an effective translation program can be helpful as well – if you choose to go that route, I’d recommend Smartling, which is primarily a business translation software. You can find out more about it at the link above.

What makes The Departed so compelling is that Costigan and .Sullivan are so obviously two sides of the same coin, and the cops and the mobs more alike than unalike which is an unsettling thought in and of itself. While the profanity and violence may put some off, they are utilized so beautifully that they become a kind of poetry within the confines of the movie. Given the top-notch performances throughout the movie, this is, like so many of Scorsese’s other films, a must-see for any film buff and it remains to this point my favorite American remake of a foreign film.

WHY RENT THIS: Amazing cast. The tension in this movie is delightfully unbearable. One of Scorsese’s best.
WHY RENT SOMETHING ELSE: May be too violent for some.
FAMILY VALUES: As is par for the course with Scorsese films, the violence is strong and often brutal and the foul language pervasive. There’s also some sexual content and drug material.
TRIVIAL PURSUIT: Scorsese wanted to shoot the film in Boston where it is set, but due to political concerns and cost concerns he was only able to shoot a few weeks in the city. For most of the film, New York City – where Scorsese was able to get tax benefits for filming – doubled for Beantown. After the success of the film, Massachusetts enacted a 25% tax break for movies filming in the state.
NOTABLE HOME VIDEO EXTRAS: The Blu-Ray edition and  2-Disc Special DVD edition have a featurette on real-life gangster Whitey Bulger (who Frank Costello was based on and who is getting a movie of his own this fall) as well as the TCM documentary Scorsese on Scorsese.
BOX OFFICE PERFORMANCE: $289.9M on a $90M production budget.
SITES TO SEE: Netflix (DVD/Blu-Ray Rental only), Amazon, Flixster, iTunes, Vudu
COMPARISON SHOPPING: The Boondock Saints
FINAL RATING: 9.5/10
NEXT: Catch .44