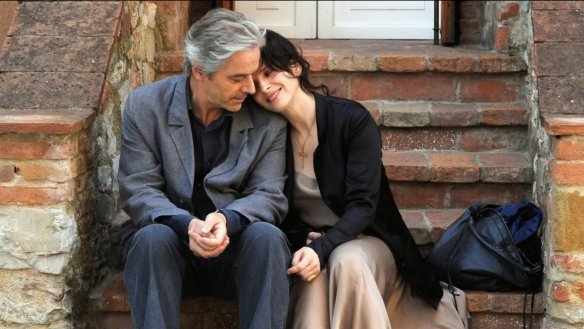 Happiness is a good public cuddle.

Some movies defy easy categorization, let alone summation. They require careful viewing in a distraction-free environment, and time enough afterwards to ponder what the viewer has seen, preferably with a nice glass of wine or a good cup of coffee.

Certified Copy is one of those films. British author James Miller (Shimell) is in Italy to discuss the Italian translation of his book which opines that while originality is preferably, there is nothing wrong with a good copy if the original is exceptional. He is talking about art of course, although his opinions also run into other aspects of life.

French ex-pat antique store owner Elle (Binoche) – whose name is never given and is referred to in the credits by the French word for “she” – is intrigued by the lecture and offers to show James around Tuscany while he waits for a 9pm train. He agrees, but first she must take her 11-year-old son (Moore) home as he is hungry and has become a distraction. She drops off her son and drives aimlessly, waiting for MIller to finish autographing copies of his book. Then they drive to the small village of Arezzo. They discuss the book in detail along the drive, then go into a museum to see a famous “copy.”

At a nearby cafe as they are having lunch the proprietress (Giachetti) mistakes them for husband and wife. While MIller is taking a cell phone call outside, she and the antique store owner talk about marriage and the antique store owner doesn’t correct the cafe owner as to the relationship with James, whom she just met. Then, things take an odd turn.

As they leave the cafe, James – who plays along with the perception that he and she are husband and wife – begins to speak to her as if they have been married for 15 years and her son is theirs. The conversation between the two becomes increasingly familiar, and the state of their relationship becomes murky. Are they truly strangers who are playing a role, or are they actually husband and wife who were pretending to be strangers? Which is real?

The truth is never clarified by Kiarostami who in the tradition of good writers allows the viewer to make up their own mind. Kiarostami, an Iranian director making his first feature film fully outside of Iran (he had shot parts of previous films outside of that country and had directed a documentary outside of Iran) is noted for his conversational pictures, with long dialogue taking place in moving cars. I’ve found his work to be an acquired taste, but when I’m in the right frame of mind the rewards are exceptional.

Shimell is a find. An opera singer (a baritone) making his first cinematic non-operatic performance, he projects a good amount of warmth. His British author is a bit prickly particularly about his scholarly work but he gives the aura of a warm giving man. Binoche is one of my favorite French actresses who displays all of the virtues that make French women irresistible; passion, opinionated and independent, which makes her unnamed character absolutely mesmerizing. The two make a splendid couple.

This is definitely not for all audiences. There is a good deal of subtlety going on and some may be confused at the change to amenable strangers to intimate lovers. Let’s just say that the subject of James’ book is a clue to what’s going on and leave it at that.

The pacing is European-slow, which also some American viewers may find frustrating. However, if you let the emotional realism wash over you and just go with the story, you will find this as rewarding as I did. Because I know not all my readers will appreciate the movie, I’m giving it a slightly lower rating than I feel it deserves – certainly this is a movie that inspires thought and debate, and not everyone is into that. However those of us that are will appreciate a movie that makes us look at a relationship from different angles – and takes for granted that the relationship isn’t what it appears to be at all.

WHY RENT THIS: Extraordinarily realistic, particularly from an emotional setting. Binoche and Shimell make a believable couple.
WHY RENT SOMETHING ELSE: Lots of awkward pauses. Slow-moving.
FAMILY VALUES: Adult themes and some sexuality.
TRIVIAL PURSUIT: Binoche won the Best Actress award at the Cannes film festival for her performance here.
NOTABLE DVD EXTRAS: The Criterion edition includes Kiarostami’s cinematic debut, the negative to which was destroyed during the Iranian revolution and the transfer of which came from the one battered print known in existence, as well as a detailed making-of feature that includes discussion of the real incident that inspired the film.
BOX OFFICE PERFORMANCE: $5.5M on a $4.1M production budget.
SITES TO SEE: Netflix (DVD Rental only). Amazon, iTunes
COMPARISON SHOPPING: Before Sunrise
FINAL RATING: 6.5/10
NEXT: Infamous