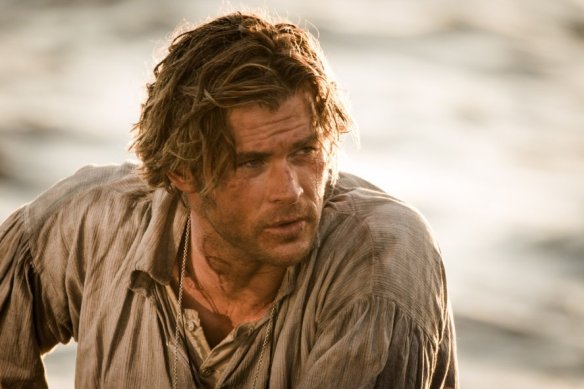 Most people are aware of the saga of Moby Dick, the story of Captain Ahab’s obsession with a great white whale that took his leg and eventually much more than that. Many consider it the greatest novel ever written by an American. What a lot of people don’t know is that it is based on the story of the whaleship Essex which was attacked by an unusually large whale in the Pacific in 1820.

It’s a story that has made the rounds in Nantucket and the whaling community of New England, so Herman Melville (Whishaw) wants to get the scoop right from the horse’s mouth – the last survivor of the Essex, Tom Nickerson (Gleeson). At first, Tom is loathe to tell the tale but at the urging of his wife (Fairley) who points out to her husband that they need the money – and to Melville that Tom needs to let all of the demons of that ill-fated voyage that have troubled him for so long out. Eventually, Tom tells the tale and quite a tale it is.

Putting to sea for a two year voyage, the Essex is commanded by George Pollard (Walker), scion of a respected Nantucket seafaring family but inexperienced at the helm. He is given Owen Chase (Hemsworth), a well-regarded first mate who has ambitions to captain his own ship someday but a son of landsmen (or land lubbers if you prefer). As they head out on their trip, hoping to pull In 400 barrels of whale oil, Pollard steers them directly into a squall, nearly wrecking the ship in the process. Not an auspicious start.

Things get worse though. The usually fruitful hunting grounds of the Atlantic are barren – already almost completely fished out – so the crew makes a try to go around Cape Horn for the Pacific fisheries, a long journey adding months to their already long and arduous trip. Lurking there is an abnormally large white whale, one that means business. The encounter between the whale and the Essex won’t be a happy one – certainly not for the seamen of the Essex.

The ship is stove and the crew is forced to abandon ship, the survivors getting into three ships normally used in the harpooning of whales. One disappears completely, never to be seen again (in reality, the third ship washed ashore years later with three skeletons aboard, and while the remains were never positively identified it as believed to have been the one from the Essex) while the other two, try for the coast of South America or at least Easter Island. However there are more than a thousand nautical miles to make it there and little food or water. Pollard commands one ship, with his cousin Henry Coffin (Dillane) aboard while Chase the other with his close friend Matthew Joy (Murphy) and cabin boy Thomas Nickerson (Holland) on board. Which ones, if either, will make it to safety? And what must they do in order to get there?

Tales like Treasure Island and Moby Dick have always excited the American imagination, although to be honest in these more cynical days of CGI and cell phones, the lure of uncharted waters is not as enticing so in that sense In the Heart of the Sea is something of a hard sell for the American moviegoing public. It would take a truly stirring movie to get people into the theater to see it.

Unfortunately, that’s not what Ron Howard delivered. There are moments, yes, where the movie really works – the sequence of the whale attack is actually one of them, although it is clearly a digital creation. The framing device of the conversation between Melville and a middle-aged Nickerson also works, mainly because Gleeson is so compelling an actor.

But there are also moments in which the movie just seems to drag. Quite frankly, watching sailors slowly dying of starvation and dehydration is not exciting which sounds a little bit cold but there you have it. Howard and screenwriter Charles Leavitt draw parallels from the whaling industry of the 1820s to the oil industry of today, parallels which have some justification, but still the harpooning sequences are bloody and a off-putting to modern sensibilities. I’m not sure we need to be told that whaling was a brutal, bloody business.

I did want to like this movie more than I ended up doing and I think that I may well have gone a little easy on it if the remarks of other reviewers are to be believed. Hemsworth, usually reliable an actor, feels like he’s had all his charisma sucked out of him for this one; you get the sense he’s like a caged animal, wanting to break out of the shackles his character has had put upon him. When the framing sequence is what works best about a film, you have a problem. And yet, I still recommend the movie nevertheless. There is enough here to keep one’s attention, but if you choose to wait until it’s available on home video, I wouldn’t dissuade you.

REASONS TO GO: Rip roaring adventure yarn. Framing sequences work well.
REASONS TO STAY: The story isn’t as exciting as the book based on it was. The pace is a bit leaden through the second act.
FAMILY VALUES: Some startling violence, disturbing images, moments of peril and adult themes.
TRIVIAL PURSUIT: This is the sixth film directed by Howard to be based on a true story. The others are Apollo 13, A Beautiful Mind, Cinderella Man, Frost/Nixon and Rush.
CRITICAL MASS: As of 12/30/15: Rotten Tomatoes: 42% positive reviews. Metacritic: 47/100.
COMPARISON SHOPPING: Moby Dick
FINAL RATING: 6/10
NEXT: Youth