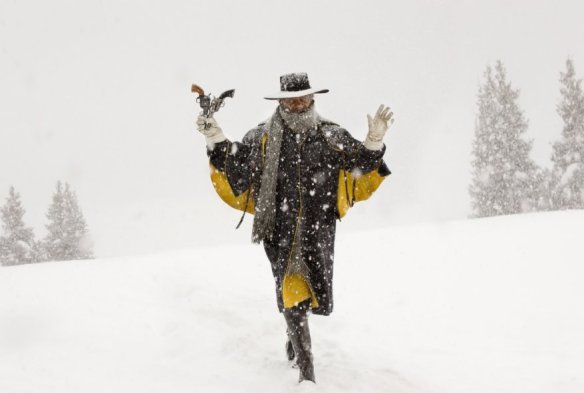 A blizzard can be hateful.

His eighth film has gotten polarizing responses from critics and fans alike, not just for the occasionally brutal violence (which to be fair should be pretty much expected in a Tarantino film) to the gratuitous use of the “N” word and the occasionally over-the-top violence against a particular female character. I’ll be honest with you; I wasn’t particularly offended by any of it, but I’m neither African-American nor a woman so my perspective might be different if I were. However, I think your sensitivity to such things should determine whether you go out and see this film, or even read on in this review.

That said, I’m going to keep the story description to a bare minimum because much of what works about the movie is that you don’t see what’s coming all the time. Essentially, in post-Civil War Wyoming, a stagecoach carrying bounty hunter John “The Hangman” Ruth (Russell) and his bounty, accused killer Daisy Domergue (Leigh) and their driver O.B. Jackson (Parks) are trying to outrun an approaching blizzard to safety in a mountaintop stage stop known as Minnie’s Haberdashery. However, along the way they pick up two additional passengers; fellow bounty hunter and former Northern colored regiment commander Maj. Marquis Warren (Jackson) and former irregular Chris Mannix (Goggins) who claims to be the new sheriff in Red Rock, the town that Ruth is taking Daisy to hang in.

Already at the Haberdashery are Bob (Bichir), a Mexican who is taking care of the horses; Oswaldo Mobray (Roth), an English dandy who is the local hangman; Joe Gage (Madsen) a taciturn cowboy writing a journal and General Sanford “Sandy” Smithers, a Confederate general (in uniform) who doesn’t seem much disposed to talk about anything to anybody, despite Mannix’ hero-worship.

In a sense, this is a typical Tarantino set-up; a lot of bad men put in a situation where they are enclosed and sort of trapped – a lot like his early film Reservoir Dogs although very different in execution. Bad men trapped in a confining space with each other is a formula for bad things happening, and they do in rather graphic fashion.

Russell, who was magnificent in Bone Tomahawk continues to personally revitalize the Western genre all by himself with another excellent performance here. John Ruth isn’t above giving a woman an elbow in the face to shut her up; he’s known for bringing his bounties in alive to be hung which isn’t what anyone would call merciful. He’s paranoid, testy and a bit of a loudmouth.

Jackson, a veteran of six of Tarantino’s eight films (including this one) is all Samuel L. Jackson here and all that it entails. He has a particularly nasty scene involving the relative of one of those in the Haberdashery that may or may not be true (everything all of the characters say should be taken with a grain of salt) that might be the most over-the-top thing he’s ever done cinematically and that’s saying something.

Goggins has been a supporting character actor for some time, and he steps up to the plate and delivers here. I’ve always liked him as an actor but he serves notice he’s ready for meatier roles and this one might just get him some. Dern, Madsen and Roth all give performances commensurate with their skills. Channing Tatum also shows up in a small but pivotal role.

Regular Tarantino DP Robert Richardson, already a multiple Oscar winner, outdoes himself here with the snow-covered Wyoming landscapes and the dark Haberdashery. Richardson may well be the greatest cinematographer working today but he rarely gets the respect he deserves other than from his peers. A lot of film buffs don’t know his name, but they should.

The legendary Ennio Morricone supplies the score, his first for a Western in 40 years (he is best known for his work for Sergio Leone and the Italian spaghetti western genre, among others) and it is a terrific score indeed. This is in every way a well crafted motion picture in every aspect.

Not everyone is going to love this. Some folks are going to focus on the racial slurs, the violence against Daisy and the sequence with Major Warren I referred to earlier and call this movie disgraceful, mean-spirited and racist, sexist, whatever else you can imagine. I will confess to being a huge fan of QT’s movies and so I might not be as objective here as perhaps I should, but I do think that this is one of the greatest cinematic achievements of his career and that’s saying something.

For the moment, the movie is available in a 70mm format at selected theaters around the country on a special roadshow edition. This is the first movie in 50 years to be filmed in 70mm Ultra Panavision, so it is highly recommended that if you can get to a theater presenting it this way that you take advantage of it. Otherwise it is just starting to hit regular 35mm theaters starting today. The roadshow will be available only until January 7, 2016 (unless extended) so don’t wait too long to go see it that way, the way it should be seen.

REASONS TO GO: Tremendous story. Well-acted and well-executed throughout. Gorgeous cinematography and soundtrack. The characters are well-developed for the most part.
REASONS TO STAY: The violence and racism may be too much for the sensitive.
FAMILY VALUES: A lot of graphic violence, some strong sexual content, graphic nudity and plenty of foul language.
TRIVIAL PURSUIT: The movie was nearly never made when the script was leaked online during pre-production and Tarantino elected to shelve it and rewrite it as a novel; however after Jackson advocated that the film be made anyway, Tarantino eventually relented.
CRITICAL MASS: As of 1/1/16: Rotten Tomatoes: 76% positive reviews. Metacritic: 69/100.
COMPARISON SHOPPING: The Wild Bunch
FINAL RATING: 9/10
NEXT: Concussion

1 thought on “The Hateful Eight”