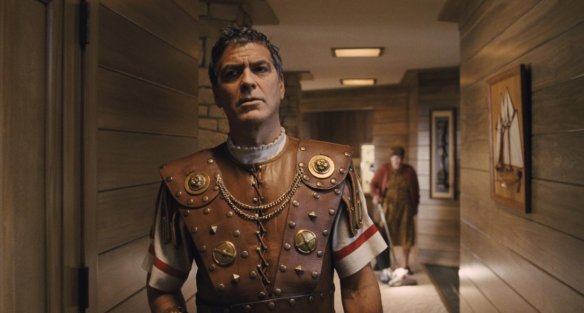 Hollywood is often portrayed as a dream factory and during its golden age, it was just that. Massive studios cranked out classic films (and, to be fair, a lot of crap too) and created lasting images of a time that never really existed. We look back at that era fondly because in many ways it was a lie.

Eddie Mannix (Brolin) is the studio chief at Capital Pictures. He fixes things when they go wrong, be they a ditzy starlet posing for risqué pictures or a family musical star (Johansson) ho has gotten herself knocked up and needs a husband pronto. Hobie Doyle (Ehrenreich), a cowboy star, has been unaccountably put into a drawing room comedy lensed by the immortal British director Laurence Laurentz (Fiennes). And the studio’s big budget production of Hail, Caesar! – A Tale of the Christ – looks to be a huge hit.

Except that Baird Whitlock (Clooney), the film’s star, has turned up missing. And not just missing, kidnapped by a group that calls itself The Future. This could be an absolute public relations disaster. Not only does Eddie have to get the ransom paid and his mercurial star back on the set in time to film the climactic speech, he also has to make sure it stays out of the gossip columns particularly via twin sisters Thessaly and Thora Thacker (Swinton). However in the meantime he’ll have to oversee a Sailor’s musical starring an athletic dancer (Tatum), a Busby Berkeley-like mermaid spectacular, a singing cowboy Western as well as the aforementioned films.

This is equal part tribute to old Hollywood and spoof of it. Clearly the Coens have a good deal of affection and reverence for the old movies. They also have a sense of whimsy that has influenced people like Wes Anderson and Charlie Kaufman. That’s present here too, more than in recent Coen Brothers films and more subversive in a lot of ways.

The production designer does a wonderful job of capturing the 50s look and the big studio vibe. Bright colors, as you’d see in a Technicolor production of the time, dominate here. The costume design is also flawless. One of the things that is typical to Coen Brother period films is the attention to detail is generally very serious even if the films themselves are more comedic.

As with many Coen Brother pictures, the cast is impressive. Clooney plays the empty-headed star to the hilt, while Brolin gives Mannix – who as a real person on the MGM lot by the way although he is fictionalized here – the harried demeanor that you’d expect from a studio executive. While Brolin’s Mannix is a bit more quirky than the real one was (the real Mannix was rumored to have had mob ties), his Catholic need for regular confession and ability to juggle a number of different balls in the air give him more personality than other writer-directors might have given a character like his. Ehrenreich projects a good deal of likability which bodes well for his future career.

Some of the supporting roles are little more than cameos but the ones that caught my attention were Swinton as the imperious gossip columnist twins whose rivalry is as abiding as their twin noses for a story. Hill is low-key as a notary public, and Johansson has moxie as the knocked up mermaid. As is usual for the Coen Brothers, the absurdity of the characters and their situation is played deadpan which only heightens the absurdity.

The problem I have here is that there are certain scenes that drag a little bit and fall a little flat. The scenes where Whitlock is having philosophical discussions with his captors is a bit silly and a lot more uninteresting. I know Da Queen complained that she was bored with the movie and I’ve heard similar complaints from other friends, some of whom are Coen Brothers fans. I can’t say that I was bored but I can see why they were.

I get that the Coen Brothers are not for everybody. People who didn’t like The Grand Hotel Budapest, for example, are not likely to enjoy this either. There is a quirkiness to their work that is I grant you an acquired taste. From a personal standpoint, it’s a taste I’ve acquired but I recognize that isn’t necessarily the same for you – and that’s not a bad thing. Your taste is your taste.

Any Coen Brothers movie is worth seeing. In my book, they’ve yet to make a movie that had no redeeming qualities. And to be fair, this isn’t going to be considered one of their best I’m quite sure – I’d rank it right about the middle of their pack. But the middle of the Coen pack is better than the entire work of plenty of other directors out there.