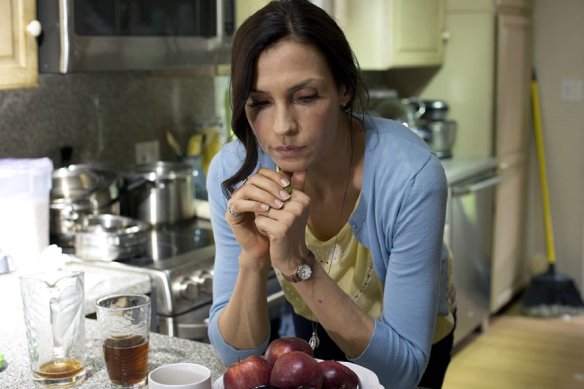 Autism is something that is often written about and occasionally depicted on the movie screen but rarely does it show what it means day to day to a family with an autistic child, particularly a low-functioning one. As the mom here snaps at an insensitive remark about her autistic daughter, “She’s not Rain Man.” Sadly, the movies give an image of autism as a kind of cute disease turning the folks that have it into happy idiots. That’s as far from the truth as can be.

Jack (Robb) is a street-smart, street-tough kid who has just turned 18. She and her sister Coke (Caruso) have been in and out of foster homes and juvenile detention for years. Jack’s probation officer (Patano) is pretty much fed up with her and is ready to send her to adult jail this time, now that she’s old enough. Jack wants nothing more than to get Coke out of the system so the two can live together and take care of each other.

But Jack’s going to need money to get an apartment for them if that’s going to happen and something more stable – a real job that pays well, but Jack has no employment experience. With the help of a friend she connives her way as a caregiver into the household of Kay (Janssen), Mark (Cohen), Robert (Broussard) and autistic Glory (Richardson).

The bills have been piling up and they can no longer afford Kay staying home and caring for Glory, but the child needs full-time supervision and the family needs two incomes and quite frankly, Kay needs the break, worn down from caring for a child who is no easy task. Jack, a born hustler, convinces the actual applicant (Jaffe) to leave her resume and references with her and then Jack assumes the identity of Donna, a well-qualified caregiver. Of course, Jack knows nothing about caring for an autistic 11-year-old but she figures how hard can it be?

Well, any actual parent of an autistic child will tell you that it can be terrifyingly hard. Autistic kids, depending on the type of autism, can lash out, go into trance-like states, be stubborn as mules, obsess with odd items, require rigid conformity and/or act out in very violent and public ways, often when it is least convenient. The thing the movie gets right is that caring for a child who has difficulty functioning can break a parent down; this is their child whom they love and they can’t hold a conversation with them, or at least only a rudimentary one. It requires extreme patience and an amazing amount of love.

What it doesn’t require is a stock character from an Afterschool Special who is about as badass as Taylor Swift saving the day. The script is riddled with clichés and as predictable as the Cubs missing the playoffs. Robb is a talented actress but she is reduced to face-scrunching, high-level mugging and when called upon to smoke (which she does because, you know, street kid) she’s the most unconvincing smoker ever, clearly not inhaling. I’d much rather that Jack be a non-smoker than be an approximation of one.

I’ve met several autistic kids in my life, some more high functioning than others but Richardson is completely unconvincing in the role. Her smile is like she’s posing for a head shot and when she’s screaming and acting out, I don’t see in her performance how incredibly intense this acting out can be. The best way to think about it is that she’s pretending to smile rather than actually smiling. Now, I’m fully aware that every autistic kid is different and some may well smile like they’re in a toy commercial, but it comes off as non-genuine here and it is distracting overall to the movie. Richardson has a history of playing Annie onstage, so you know she’s got talent, but this was a definite misfire and I blame the director, who should know better.

I liked Janssen’s performance as the long-suffering mom. Janssen clearly gets how stressed out Kay is and how bone-weary she is. When Janssen gets the chance to act with silence, she is marvelous – conveying far more of the parental experience with her eyes and her facial expression than the script is doing. Sadly there is so much that the script does that stops the movie dead in its tracks, like a family sing-along that feels completely in-authentic and the denouement in which is exactly what you think it will be. Even the plot twists aren’t twists so much as lane changes.

I really give the filmmakers credit for wanting to make a film about how autism affects the entire family, and there is a great movie to be made on the subject, but this really isn’t it. Too many predictable plot points, unconvincing acting from the two actors who needed to be at their best and just pedestrian filmmaking torpedo what should have been a compelling film. Janssen’s performance is worth checking out but that only takes the movie so far; a very mild and disappointing recommendation.

REASONS TO GO: Janssen is compelling as the mom. An inside look at the life of a family with an autistic child.
REASONS TO STAY: With a predictable movie-of-the-week plot, loses some of its credibility. Robb and Richardson give subpar performances.
FAMILY VALUES: Depictions of teen misbehavior, adult subject matter, teen smoking and some mildly foul language.
TRIVIAL PURSUIT: Grillo in real life is the mother of an autism spectrum child.
CRITICAL MASS: As of 2/26/16: Rotten Tomatoes: 63% positive reviews. Metacritic: 55/100.
COMPARISON SHOPPING: Molly
FINAL RATING: 5/10
NEXT: Legendary