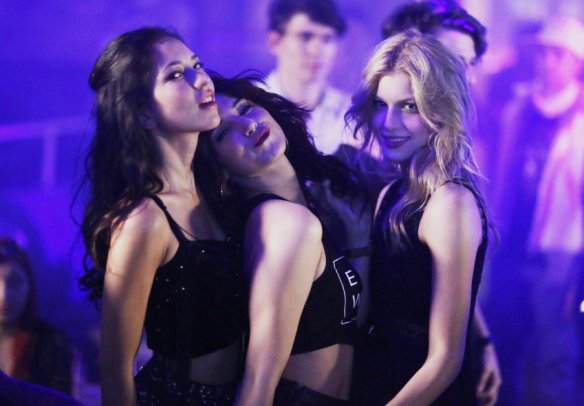 One is a fresh-faced wanna-be ballerina from the Midwest who is in danger of losing her scholarship to a prestigious arts academy in Manhattan. The other is a brooding, angry subway busker whose violin playing shows tons of ability and tons of passion but little restraint; he’s about to be deported. Is this a match made in heaven or the odd couple?

This is the latest entry into a genre that really began in 1980 with Fame but has really picked up steam in the last decade with the Step Up movie franchise, the Glee TV series and Pitch Perfect, to name a few, plus other assorted one-offs. Star-crossed lovers from opposite sides of the tracks, one into classical performance art, the other an innovator, face enormous challenges, enter a dance competition usually revolving around hip-hop, then after a temporary setback nearly tears them apart, reunites in the last frame to grab the gold, the glory and the fluttering hearts of tweens everywhere. Roll credits.

It’s not a bad formula per se, but this is the type of movie that has not been among my favorite genres and this one is a fairly weak representative of it. The dialogue is a bit clunky and the plot preposterous. The saving grace for the couple – ballet dancer Ruby (Kampa) and hip-hop violinist Johnny (Galitzine) – is (get this) a string and dance competition with a $25,000 grand prize. Have you heard of a string and dance competition, much less one that is giving away that much cash? I didn’t think so.

There are also hard hats who break out into a dance-off on a subway platform and a (fictional) conservatory that seems to only employ Russians, including a feisty and nearly unrecognizable Jane Seymour as the headmistress, and Paul Freeman as a dancer whose hips were shattered by the Nazis who has become a pre-eminent ballet teacher. Ironic, since Freeman played a Nazi ally in Raiders of the Lost Ark.

The dance sequences are energetic, spirited and actually a lot of fun to watch. That figures, since Dave Scott, one of the best hip hop choreographers in the business, is involved as a producer (although he is not listed as a choreographer here). They’re most certainly the best aspects of the film and make it marginally watchable. The cast is fresh-faced and at least good watching; Kampa has a kind of ingénue appeal, while Galitzine has cheekbones that can cut glass and a brooding pout sure to set tween girls to sighing in their Corn Flakes for months after seeing this.

But too much of this movie is simply “been there, done that” and the most amazing dance sequences in the world can’t save a movie that borrows so heavily from other movies, many of which are frankly not that good. I will give it props for having a gee-whiz can-do vibe and a certain innocent sweetness to it, but there isn’t enough here to hold the interest of any but the most non-discerning for the entire hour and a half run time.

REASONS TO GO: High energy. Winsome leads.
REASONS TO STAY: Cliches abound. Adds nothing to the genre. Stretches credulity. Predictable throughout.
FAMILY VALUES: A little foul language and some thematic elements.
TRIVIAL PURSUIT: Much of the movie was filmed in Bucharest, standing in for Manhattan.
CRITICAL MASS: As of 4/8/16: Rotten Tomatoes: 67% positive reviews. Metacritic: 48/100.
COMPARISON SHOPPING: Step Up
FINAL RATING: 4/10
NEXT: To Keep the Light