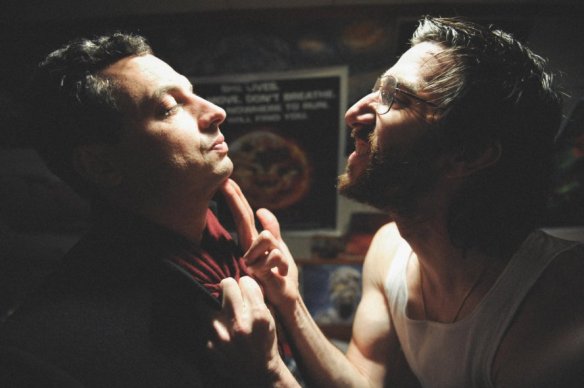 Donald gets in Peter’s face.

We’ve all had that friend; the one who isn’t really a bad person but they just try too hard and end up causing all sorts of awkward moments. We roll our eyes at their approach and often these are the ones who have a really hard time growing up past a certain time in their lives.

Peter Latang (Wakeman) has returned to the Rhode Island town he grew up in and left 20 years ago to settle the affairs of his grandmother, who raised him after his parents died. Peter isn’t all that eager to be there, and true to form things start going wrong right away when he loses his wallet on the bus he took from Manhattan (where he works in the financial industry) to Rhode Island. The realtor who is putting grandma’s house on the market is comely Kristin (Krause) who seems to remember Peter fondly although he doesn’t have a clue who she is.

Without transportation and without cash, Peter is forced to suck up his pride and walk across the street to see his best friend in high school, Donald Treebeck (Avedesian). Donald is a bearded man-child who worshiped the ground Peter walked on back in the day and is absolutely thrilled that the two are reunited. Peter is clearly uncomfortable but he’s in a bind and Donald is essentially his only way out, so he reluctantly agrees to spend time with his old friend.

Thus begins a journey to old haunts, old friends and old flames as Donald, who clearly has absolutely no filter, puts Peter in one uncomfortable predicament after another. It soon becomes evident that Donald has endured bullying, distance and rejection far beyond perhaps what he deserves. Sure he’s stuck doing the same old things that he did in high school; listening to heavy metal, smoking pot, getting into mischief but when push comes to shove he’s there.

Soon it becomes evident that Donald isn’t the misfit we mistook him for at first, nor is Peter the stable, successful guy he makes himself out to be. The bonds of friendship were always tenuous on one side of this equation, but there is no doubt that both men are going to need to rise above their own limitations if they are to grow as people and the one more capable of it just might surprise you.

As I watched this at the press preview, I have to admit that at first I wasn’t terribly impressed. The movie seemed to be rife with indie cliches, The situations were so awkward as to be annoying to watch; it seemed like I as doomed to be spending an hour and a half with one of those annoying guys who I went out of my way to avoid spending time with.

Then a funny thing started happening. I started getting into it. And the more I found out about Donald and Peter, the more interested I became. I found suddenly that rather than Peter being the guy I wanted to spend time with, it was Donald. Sure, he’s a bit of a screw-up and a stoner and prone to inopportune behavior, but there was so much more to him than met the eye. He’d been given a role to play; not one he particularly wanted, but it was his and he contented himself with playing it as best he could. Most of us don’t have that sense of grace.

Peter on the other hand, becomes less of a stand-up guy the longer the movie goes on. You begin to understand that he’s a self-centered jerk and always has been. The more you watch him, the more you think back to the early part of the movie and realize that you really hadn’t noticed what a dick he was being. That’s masterful acting but it’s also masterful writing and direction.

In fact, I find that even after the movie was finished, I was getting more into it and the more I thought about it, the more I like it which likely means by Independence day I’ll likely have this in my top ten of the year. Or maybe it will plateau right around where it is now. Still, this is a fascinating study in human relationships and how we interpret them. They’re not always the way they seem to be on the surface. In fact, they rarely are.

REASONS TO GO: A lovely bittersweet vibe. Grows on you more after you’ve seen it.
REASONS TO STAY: A couple of indie cliches here and there. Takes awhile to get its footing.
FAMILY VALUES: Among other things, nudity, profanity, some drug use and sensuality.
TRIVIAL PURSUIT: Was originally made as a short and was then expanded into a feature.
CRITICAL MASS: As of 4/12/16: Rotten Tomatoes: No score yet. Metacritic: No score yet.
COMPARISON SHOPPING: Gabriel
FINAL RATING: 6.5/10
NEXT: The Jazz Loft According to W. Eugene Smith