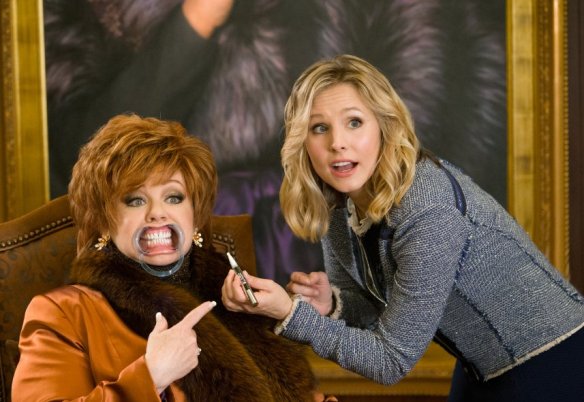 A smile only a dentist could love.

The bigger they are, the harder they fall or so goes the old saying. These days, the super-wealthy are the biggest they are. It is rare for one of them to fall, but when they do it leaves a crater that could swallow a number of European nations.

Michelle Darnell (McCarthy) is the 47th richest woman in the world. Orphaned at a very young age and never able to latch onto a foster family (she would be taken by some but always returned shortly afterwards), she has grown up believing that family is more than a hindrance to success than a help. Her self-help empire is largely run by her long-suffering assistant Claire (Bell). One of her longtime business rivals (and former lovers), the crafty Renault (Dinklage) has leaked information to law enforcement that Michelle has been indulging in insider trading. As a result she is jailed for six months and her assets seized.

When she gets out of jail she has nothing and nowhere to go, and despite Claire’s misgivings, she invites Michelle to stay with her at the behest of Claire’s daughter Rachel (Anderson). At first Michelle is morose, defeated but as she gets involved with Rachel’s Bluebird group (think Girl Scouts), she hits upon a scheme to make her fortune again using Claire’s delicious brownies.

This ignites a turf war with rival Bluebirds and attracts the attention of Renault who wants to squash Michelle like a bug. With the help of Claire, Rachel, the Bluebird troupe and Claire’s new boyfriend Mike (Labine), Renault and the competing Bluebirds don’t stand a chance as Michelle will stop at nothing to get back on top – but will it be at the cost of her new family?

There are many who believe that McCarthy is the most gifted comic actress working today and there is certainly good reason to support that. She is certainly the most popular. When McCarthy is at the top of her game, she can be devastatingly funny, but with the wrong script the laughs come at her rather than with her. This is somewhere in between those two extremes.

The script isn’t the best one McCarthy has had to work with and in this regard she has nobody to blame but herself since she co-wrote it along with her husband (and the film’s director Ben Falcone) and fellow Groundling Steve Mallory. The plot is wafer-thin and doesn’t stand up to a great deal of scrutiny. Darnell is supposed to be a cross between Martha Stewart and Leona Helmsley, but with a heart of gold deep down. Sadly, she just comes off as a bitter woman who largely deserves the indignities that come her way. I had almost zero sympathy for the character and that makes it really hard to root for her during the climactic scenes.

That’s not to say that elements didn’t work. McCarthy, as I’ve mentioned, is as talented as they come and her relationship with Bell works well. The two women make an excellent team. Some of the comic bits are extremely funny, although the best one involving a sofa bed is in the trailer. However, there are a lot of bits that fall flat including one involving Michelle and Claire comparing boobs, which an excerpt from also appears in the trailer. I guess that’s equal opportunity publicity.

There is kind of a mean tone to the movie that I found slightly disturbing. I get that the condescending attitude of the 1% for the rest of us is supposed to be getting grilled here, but McCarthy should have used a little less lighter fluid. The flame is burning the meat and there is quite enough meanness in the world without adding to it. Still, there are enough funny moments to make a look-see at the film worth your while.

REASONS TO GO: McCarthy and Bell have some fine chemistry. Some fairly funny slapstick moments.
REASONS TO STAY: The plot is dumb as a rock and is completely implausible throughout. The overall mean tone was really disconcerting at times.
FAMILY VALUES: The language is considerably salty, and there is plenty of sexual innuendo and some drug use.
TRIVIAL PURSUIT: WWE wrestler Dave Bautista made a cameo in the film, but his part was eventually cut out. It appears in the trailer however.
CRITICAL MASS: As of 6/5/16: Rotten Tomatoes: 19% positive reviews. Metacritic: 40/100.
COMPARISON SHOPPING: Get Hard
FINAL RATING: 5/10
NEXT: Love & Friendship