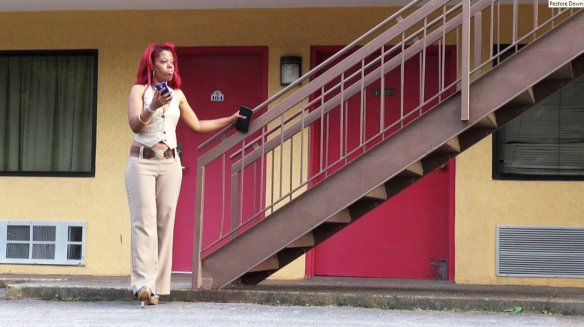 A pop Princess in the making.

Dreams come in all shapes and sizes. Some are ephemeral things, ideas that we vaguely like but really don’t do anything about so they remain formless. Others are those we work actively towards and put our hearts and souls into. Those are the ones more likely to come true.

Samantha Montgomery, whose stage name is Princess Shaw, has a dream of being a singer. And not for nothing; she has a legitimate voice, beautiful and evocative. She’s also a crackerjack songwriter, her songs filled with longing and emotion so much so that they reach out and grab the listener, take hold of them by the scruff of the neck and don’t let go until they feel the same thing Princess is feeling.

Samantha works by day in a New Orleans elderly care facility. She is upbeat and cheerful and seems to love working with her patients and caring for them. Some nights, she goes to Open Mike shows at local bars, and once in awhile sings at nightclubs and parties. She uploads a capella versions of her songs onto YouTube where she has a channel that several hundred subscribers check out from time to time. She labors in obscurity but still hopes that one day, she’ll be discovered.

What she doesn’t know is that she already has been. Ophir Kutiel, who goes by the name of Kutiman, has made some Internet fame for himself as a remixer, taking elements from YouTube music videos, cutting and pasting them together to make a cohesive song – all without the knowledge of the participants until the new video is posted. He has, against all odds, discovered the work of Princess Shaw and has been captivated by it. He takes one of her songs, “Give It Up,” and layers percussion, guitars, brass and piano – and creates a song that has a timeless urban pop feel to it, taking elements of hip-hop, jazz, R&B and a little bit of rock and roll to make something really tasty. You can see the results of his efforts here.

&Israeli documentary filmmaker Ido Haar originally was going to look at all of the various components of the video but once he met Princess Shaw he knew he didn’t need any of the other musicians. Her story is compelling, with a background of being sexually abused as a young girl and continuing on into adulthood into an abusive romantic relationship, she has weathered some tough times. We find out most of this later on in the film; she’s really a blank slate as the film begins, which is a wise move. We only know the longing and loneliness she feels through her music.

We never find out what Samantha/Princess thinks is the reason she’s being followed by a camera crew. She was unaware of what Kutiman was up to although Haar was certainly in the know. I think that knowing what she thought was going on would have been beneficial to the film, but that’s really nit-picking. Then again, it would make some of what’s going on feel a little less staged.

Princess Shaw has an amazing voice but it is her heart that is at the center of this film. Not only is she upbeat despite the obstacles and difficulties she’s had to face, but she shows tenderness and appreciation for her patients, her family and those musicians she encounters around town (midway through the film, she moves to Atlanta to try and make her dream happen). One of the most special moments in the film is when Montgomery hears the Kutiman music video for the first time…and watches in absolute astonishment as the video approaches a million views.

The movie ends with Princess being flown to Tel Aviv to perform at a Kutiman concert there. She is absolutely delightful, hugging every musician like a long lost friend, taking delight in being somewhere she never thought she’d be. The concert is a bit anticlimactic, but it’s clear she’s a performer with a capital P. I don’t know what happened with her career after filming ended, but I’d like to think she’s getting representation and getting ready to record with musicians…and maybe touring. I’d pay to see her, and I don’t go to any concerts anymore.

It is stupid difficult making it in the music industry. People long to be stars but few are willing to put in the work to make it happen and fewer still have the talent to make it happen. Even if you have both of those qualities, that’s no guarantee you’ll make it in a business that’s as cutthroat and as insular as the music industry. As anyone who’s seen any episodes of shows like American Idol or The Voice can attest, the world is full of people with the dreams of pop stardom. It’s nice to see a movie about someone who actually deserves it.