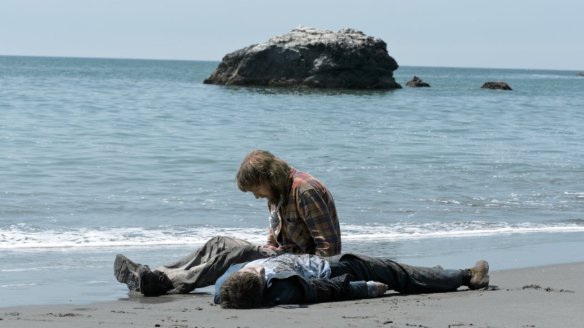 Just another day at the beach.

Look, some movies simply aren’t meant for everybody. And that’s not necessarily a bad thing; in an era where Hollywood is constantly trying to create franchise films that are all things to all people, it’s refreshing once in awhile to happen upon a movie that is meant to appeal only to a narrow few and if you’re one of that narrow few, it’s like getting a private message from someone who shares your own particular interests.

On a deserted tropical island, a bearded and bedraggled Hank (Dano) is standing on a cooler with a noose around his neck, ready to step off and have an end to everything. How he got to this island is unimportant; the salient fact is that he’s totally alone – and sharp-eyed viewers will recognize that as a metaphor that drives the film.

However, his loneliness ends with the site of a man washed ashore on the beach. Forgetting his precarious position, Hank steps off…and fortunately for him, the rope snaps, allowing him to rescue the man…who is sadly, quite dead. The corpse, whom Hank names Manny (Radcliffe), is full of the gasses of decomposition and farts constantly. If you are the sort who is offended by flatulence, read no further and skip this movie altogether. You will not find a movie anywhere ever that revels in the act of breaking wind as this one does.

It turns out that Manny’s gasses can be used in a variety of ways, including as a propulsion system turning Manny into a kind of stinky Jet Ski that transports Hank from the desert island to a location of forest and ocean. The prospects are much better for survival here, and Hank builds…well, a recreation of his life for Manny because Manny is able to talk to Hank. Hank gives Manny tips on how to pick up girls and other assorted facts of life. As he does, we begin to learn that Hank is a deeply wounded and possibly deeply disturbed young man and that not everything he says can be trusted.

Which, once again, is a metaphor for this film. Not everything that the filmmakers show you can be trusted and as the story unfolds, our point of view is changed somewhat – more than somewhat, in fact. It is a bit of a carnie trick, a game of Three Card Monty that the filmmakers – a pair of young auteurs who got their start in the music video game and who are known collectively as Daniels – play on their audience. Some are going to feel a bit cheated and others will be delighted, as is usually the case in cinematic con games.

The movie is largely Radcliffe and Dano, with Winstead showing up mainly in the last reel as the object of obsession for both of the main characters, the living one and the farting corpse. There are other characters here as well but again, they show up late and have little impact on the story except to help bring it to an unexpected although not unsurprising conclusion given on what we witnessed in the rest of the movie. Dano has become known for parts like this and he performs it with gusto; this well may become one of his signature roles. Radcliffe continues to take chances while distancing himself from a certain boy wizard, and we are rewarded by a character who is sweet and funny and charming. I don’t know that Radcliffe will necessarily want to be remembered for being a flatulent cadaver but he seems to have promoted the role with a good sense of humor and a ton of enthusiasm.

There are some scenes that are heart-achingly beautiful here, as well as others that are downright crude. It is a literal mix of the profane and the sublime. I will say that this may well be the most imaginative movie of the year; certainly you won’t be seeing anything like it in the multiplex or at your local film festival. You may find yourself smirking at fart jokes, that lowest common denominator of all humor, but you will also find yourself thinking about the human condition. If the movie has a flaw, it is that the filmmakers seem to be completely aware that they have a high cinematic IQ and at times the movie feels a little condescending, a little hipper-than-thou.

Mostly though, this is an artistic endeavor that tickles the funny bone as well as the brain stem. I can’t say that every reader is going to fall for this the way I did. For that reason, I’ve given the movie a lower rating than it deserves; I can’t in good conscience say “everybody should go see this.” Everybody should not go see this. If your tastes run towards the adventurous, if you’re not easily offended by the scatological and if you are willing to allow yourself be taken in by the wonder, this is the movie for you.

REASONS TO GO: An imaginative exercise different than anything you’ve ever seen. It’s genuinely funny at times. This is truly movie magic on a budget.
REASONS TO STAY: This is most definitely an acquired taste. It may be a little bit too full of itself.
FAMILY VALUES: Plenty of gruesome images, some violence and brief nudity.
TRIVIAL PURSUIT: All of the songs in the movie are sung a cappella, mainly by Andy Hull of the Manchester Orchestra (who also cameos as a cameraman near the end of the movie) and Robert Powell.
CRITICAL MASS: As of 7/19/16: Rotten Tomatoes: 64% positive reviews. Metacritic: 62/100.
COMPARISON SHOPPING: Adaptation
FINAL RATING: 7.5/10
NEXT: The Fundamentals of Caring