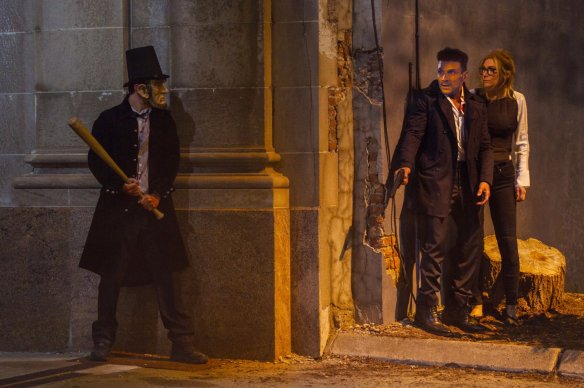 Ol’ Honest Abe hates what his country has become.

We are a violent nation. There’s no disputing it. It runs in our veins, out the pores in our skin, and in every crack and crevice of our souls. We never left the gunfight at the OK Corral; we’re still out in the middle of the noonday sun, blazing away with our Colts – or just sitting on the side of the street, watching the carnage from a safe distance.

But there are those who are tired of it, who think that the Purge is being used to cleanse the poorer neighborhoods so that the government doesn’t have to spend as much on social programs. Senator Charlie Roan (Mitchell) is running for President on a platform of bringing the Purge to an end. She has seen how the New Founding Fathers, in the person of candidate Minister Edwidge Owens (Secor) who is running against her, have been lining their own pockets.

Of course the powers that be can’t have their cash cow being threatened, so they conspire to bring the crusading Senator to a sticky end. They enact a law which exempts nobody from the Purge – which the Senator would be because of her office – and look to place some moles in her team. The only one she can really trust is her security chief, Leo Barnes (Grillo) who was the subject of the previous Purge is now in the Secret Service and he is constantly exasperated by the Senator’s willingness to go walking into a crowd of supporters to press the flesh. Of course, it’s a nightmare for those trying to protect her from nutjobs and assassins.

With the new law in place and little time to shore up the security at the Senator’s home in suburban DC, Leo sets up what is essentially a fortress and leaves the Senator with the only person he can trust – himself, and maybe her campaign manager (Phillips). Unfortunately, his security team has been compromised and when the Purge starts in earnest, her home is attacked. Leo barely gets her out alive. They are rescued by Joe (Williamson) who owns a deli he’s desperately trying to protect, and his employee Marcos (Soria) who has a vested interest in keeping the deli safe. After an attack by a couple of spoiled bitches who were caught shoplifting by Laney Rucker (Gabriel), a sort of local hero from the Purge a couple years previous (essentially taking over from Carmen Ejogo in a role rewritten for Gabriel when Ejogo turned down a repeat performance), the Senator and Leo make their way to a safe zone operated by the legendary anti-Purge activist Dante Bishop (Hodge), who has plans of his own. Can the Senator survive the night and end the Purge once and for all?

I have long since held that the Purge series is a metaphor for modern politics. The New Founding Fathers are essentially Donald Trump in John McCain’s body. This being lefty Hollywood, you can kind of guess the dim view of the NFFs that the filmmakers take. I am not so naive to think that the right are all monsters and the left are all heroically fighting for the rights of the little guy. As the recent WikiLeaks release has shown us, there is plenty of corruption in the DNC to go around as well.

Grillo, who is mostly known for being  a Hydra agent (Crossbones) in the Captain America movies, takes the unfamiliar heroic role and runs with it pretty well. He is not the matinee idol kind of guy; more of a rugged manly sort. Still, he has a future as an action hero if he chooses to go that route. Mitchell, best known for the TV show Lost, is luminous as Charlie Roan. Even the butt-ugly glasses she is forced to wear don’t take away from her natural glamour. Although some are comparing the character to Hillary Clinton, I think she is meant to be more of an Elizabeth Warren sort, although some may disagree. Secor is not really a Trump sort per se, but some will see certain figures of the Conservative Christian group in the good Minister (who is far from good). Mike Pence, anybody?

DeMonaco has helmed all three of the Purge movies and went from a home invasion story to a kind of overview tale to now one that attacks the mythology behind the story, which is a natural progression in my book and lets us see more into the circumstances in which the Purge would be allowed to continue for so long. In doing so, DeMonaco has helped create a cogent cinematic universe which is all the rage these days. Don’t be surprised if this does well that you don’t see a couple of spin-offs headed our way.

Politics aside, there is kind of a neo-Clockwork Orange vibe going on that is fascinating. It is also interesting that a film that is purportedly against the expression of violence is itself so violent. Some might find that a little hypocritical but I think that the irony is intentional; I’m big on giving Lefties the benefit of the doubt. What is less encouraging is that the movie seems a little more self-repetitive; I suspect the franchise could use a different perspective the next time around, assuming there is one. If there is, I wouldn’t mind but frankly, this was the most meh of the franchise so far.

REASONS TO GO: The movie really drills down into the Purge mythology more than any other film in the franchise.
REASONS TO STAY: Seems to be running a little bit out of steam.
FAMILY VALUES: Lots of violence, some of it graphic and a fair amount of profanity.
TRIVIAL PURSUIT:  Edwin Hodge is the only actor to appear in all three Purge movies.
CRITICAL MASS: As of 7/25/16: Rotten Tomatoes: 54% positive reviews. Metacritic: 55/100.
COMPARISON SHOPPING: The Warriors
FINAL RATING: 5.5/10
NEXT: The Perfect Husband