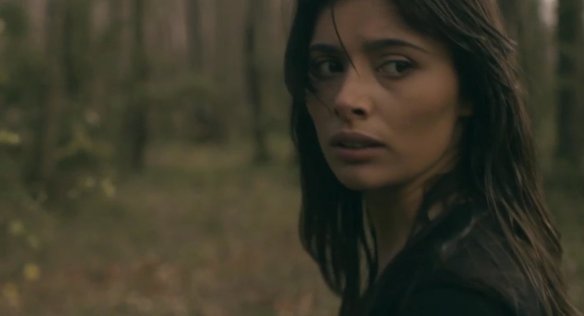 A walk in the woods.

Who knows what goes on behind bedroom doors? The relationship between a husband and a wife is largely unknown to the world other than to the two people in it; the things they choose to share with close friends and family may shed some light on at least the perspective of one member of the couple, but at the end of the day, the truth is known only to the husband and the wife.

Nicola (Roberts) and his wife Viola (Wright) have been going through a very rough patch. After a family tragedy had left her wallowing in grief and him trying to resurrect their marriage from the strained doldrums it’s fallen into, he decides that maybe the best thing for them would be a change of venue. Accordingly, he drives the two of them out into the Italian countryside where his Uncle has a cabin up in the mountains. It would seem to be a good place to reconnect and rekindle.

The problem is that Viola seems diffident to any kind of reconciliation; she’s high-strung, sneaking smokes when she thinks her husband can’t see her, and refusing any sort of sexual advance by him. His frustration is growing; he is trying to be as perfect a husband as it’s possible to be but she won’t give him even an inch of slack. Something has got to give…but when it does, what will be the cost?

The plot here is pretty simple and could be extremely effective in the right circumstances. Sadly, these aren’t them. The acting here for one thing is extremely inconsistent. The two leads are required to carry nearly the entire film and I’m not sure if the case here is that they’re not equal to the task, or if they didn’t get the direction they needed to turn in the kind of performances that the movie needed – and didn’t get. Roberts, in particular, seems particularly stiff; at times he looks like he would rather be anywhere but in this film. His character changes drastically about two thirds of the way through; the change comes off drastically with little warning and makes one feel as if they are lurching on a train that is in the process of derailing; there are no subtle hints as to why his character changes or any indication that he’s going to change. I suspect that is more the director’s choice than Roberts’ idea. Wright fares little better, but at least she conveys some modicum of feeling.

Pavetto is an Italian director who is working on an English-language film and that might have hampered him somewhat; the dialogue is a bit flat-sounding to my ears, and quite frankly, the tension that the movie needed to succeed isn’t always there. The last 30 minutes of the movie should be tense and pulse-pounding but at this point the viewer is checking their watch or loading up another movie to watch.

But the movie isn’t completely without merit. One thing that Pavetto does nicely is combine the genres of 80s slasher films and Italian giallo into a nice little mix of styles that actually works, or would have worked with a little more realism in the acting department. Cinematographer Davide Manca gets full marks for setting up some beautiful shots that seem to indicate that there is someone watching, occasionally giving some startle scares with half-glimpsed figures that make one wonder if there is more to the story than meets the eye. As it turns out, there is – but you have to sit through the entire film to discover what it is.

Therein lies the rub; the movie has an ending that does have quite the twist involved, but in order to suss it out you have to sit through a movie that doesn’t do the twist justice. It is incumbent upon the viewer to determine whether that payoff is worth sitting through the rest of the movie for and to be honest, I can’t really advise you one way or the other whether you should; it will depend on your tolerance for subpar acting. I found it enough to give the movie a very mild recommendation, but you might not agree. The gore ‘n’ guts crowd will probably appreciate some of the violence but will bemoan the lack of nudity. The rest of us will likely bemoan the lack of passion.

WHY RENT THIS: A nice mash-up of giallo and 80s slasher-films. There’s some nice cinematography here.
WHY RENT SOMETHING ELSE: The acting is a bit stiff. The film could have used a little more tension.
FAMILY VALUES: There’s violence, some of it graphic and brutal; some sexual scenes, rape and disturbing content.
TRIVIAL PURSUIT: Pavetto originally made a short by the same name, but later fleshed it out into a feature with a new cast and filming in English rather than Italian which the original was in.
NOTABLE DVD EXTRAS: The original short film is included.
BOX OFFICE PERFORMANCE: Not available.
SITES TO SEE: Vimeo
COMPARISON SHOPPING: Sleeping with the Enemy
FINAL RATING: 5/10
NEXT: Captain Fantastic