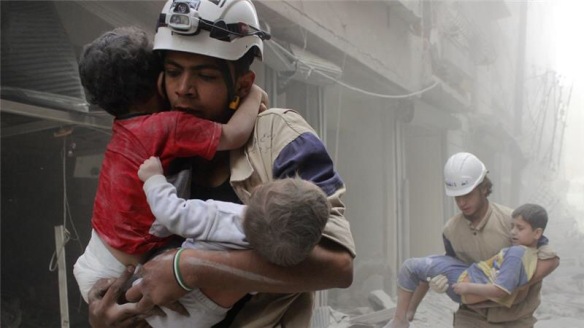 A profile in courage.

The civil war that rages in Syria has become a political mess as the citizens of that country have to endure military bombings, the depredations inflicted upon them by their own government as well as the harsh occupation in some places by ISIS. It’s no wonder that refugees are pouring out of that country, trying to find safety and sanity.

But not everyone is leaving. Even in cities like Aleppo there are people still trying to cling to their homes in the hope that things will get better, but even so there are regular bombings and with bombings come people buried in rubble. That’s where the Syrian Civil Defense comes in. Nicknamed “the White Helmets” for their distinctive protective headgear, they go into terribly dangerous situations, into buildings that have been bombed and are structurally unsafe in order to pull out people who are injured or trapped.

We follow three members of that group in Aleppo (the SCD operates throughout Syria wherever they’re needed)  none of whom were trained professionals prior; one was a construction worker who built homes; another a tailor and the third a blacksmith. In fact, they are sent to Turkey to receive the training they desperately need to be more effective. They go unarmed and they fire no shots in anger at anyone – “I think it’s more important to rescue a soul than to take a soul,” says one laconically.

All three are family men who go to work desperately worried about their homes and loved ones, who are at risk every single day simply by virtue of the fact they live in Aleppo. While they are in Turkey they joke with one another, even occasionally playing practical jokes. They talk about their children and their hopes for them. To a man, they all believe that things will eventually get better.

But as the conflict approaches its seventh year with no end in sight, it’s hard not to admire these men who took it upon themselves to put themselves in harm’s way for the sake of others. The group’s motto is a quote from the Koran; “save one life and you save humanity.” They are certainly putting that to good use.

In another era, these men would have qualified for John F. Kennedy’s book Profiles in Courage. However, the organization has been nominated for a Nobel Peace Prize. In three years they have saved (as of the release of the film) more than 58,000 lives while 130 of their number have paid the ultimate price.

Do be warned that some of the footage is pretty intense. Most of it was filmed by the White Helmets themselves; the situations were far too dangerous to send camera crews in. Director von Einsiedel didn’t even come to Syria, although he did spend time with the subjects in Turkey. He had more than 70 hours of footage to go through, much of it unusable because it was too graphic. However even of what is shown some of it may be disturbing to the sensitive although when they pull the “Miracle Baby” out of the rubble of an apartment building (a one-week old baby who survived a direct hit to her home) one can’t help but cry along with the rescuers who are also crying.

The documentary is only 40 minutes long but it packs a powerful punch. The downside is that it shows mankind at its worst – you can’t help but feel infuriated when you watch bombs hitting civilian targets with the knowledge that they were likely specifically targeted. The upside is that you also see mankind at its best – which makes you think that maybe this species might have a future after all.

REASONS TO GO: The message is uplifting and powerful. The three subjects are engaging and appealing in their ordinariness.
REASONS TO STAY: Some of the footage is not suitable for the sensitive.
FAMILY VALUES:  There are many disturbing images and some war violence.
TRIVIAL PURSUIT:  Khaled Omar, the White Helmet who is depicted here pulling the “Miracle Baby” out of the rubble, died in an airstrike in August 2016.
BEYOND THE THEATER: Netflix
CRITICAL MASS: As of 10/18/16: Rotten Tomatoes: No score yet. Metacritic: No score yet.
COMPARISON SHOPPING: Restrepo
FINAL RATING: 7.5/10
NEXT: Miss Sharon Jones!