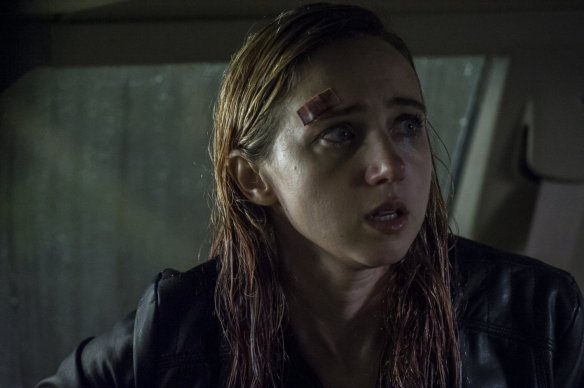 It was a dark and stormy night…

The things that scare us are often those that hide in the shadows, that dwell in the dark but they aren’t always the most dangerous things. Sometimes what is most threatening is that which is right in front of us.

Lizzie (Ballentine) is entering her teen years with a bigger burden than most. Her mother Kathy (Kazan) is a raging alcoholic with appropriately awful taste in men. Lizzie yearns for a normal life but that is not likely to happen with Kathy who is far from a candidate for the Mother of the Year award. Lizzie just wants Kathy to drop her off at school so she can appear in the school play but the two get into a massive fight which ends up with Kathy essentially telling her daughter to go straight to Hell.

The two simply can’t co-exist any longer so Kathy decides to take Lizzie to live with her father (Speedman) who may or may not be much better, but whatever – Kathy is going to take her daughter in the middle of a rainy night through a lonely wooded road. When a wolf runs out into the road, Kathy spins out the car and wrecks it. However, thank goodness there is a cell signal and she calls for an ambulance and a tow truck.

When the two ladies investigate, they realize that the wolf was in the process of being eaten before they hit it. And when the tow truck driver (Douglas) arrives, it soon becomes crystal clear that they’re being stalked by something that is not anything anyone has ever seen before but there is one thing that is absolutely for certain about it – it’s hungry.

There is room here for a really nifty horror film but unfortunately we don’t get it. The constant bickering between Lizzie and Kathy gets irritating after awhile. Also the backstory is largely told through flashbacks which have a tendency to stop the movie dead in its tracks and interrupt the goings on. These also get irritating after awhile.

Kazan has a very youthful face which is perfect for this role; she barely looks old enough to have graduated from high school herself. She has a pretty thankless role; Kathy isn’t what you’d call admirable although when push comes to shove, she finally reacts like an actual mother but most of the movie tells us that she isn’t really much of a mother to begin with. Why she suddenly becomes one doesn’t feel very organic to me.

There are a lot of things that I call horror movie shortcuts; actions taken by the characters that defy logic. Even when panicked, most people aren’t going to continually venture past the streetlight that seems to be their only protection just to see what’s going on. However, the women’s actions serve to advance the plot but not necessarily the characters. That is some lazy writing right there.

The creature effects are nifty (and non-CGI, refreshing in this day and age) and the filmmakers wisely choose not to reveal too much about the monster. They are undoubtedly familiar with the adage that the imagination is far scarier than anything any filmmaker can come up with in general and the filmmakers use that to their advantage.

There are a few moments here and there that are generally scary and the dysfunctional mother-daughter dynamic might have made for an interesting background for the film, but in the end it’s just another monster hunt and not a particularly innovative one. Generally, I’d wait on this until it becomes available at a bargain streaming fee, or on a service you already subscribe to. It’s nothing to seek out intentionally though.

REASONS TO GO: The creature work is pretty nifty.
REASONS TO STAY: Lapses in logic and realism spoil the plot. The mother-daughter bickering eventually got on my nerves. The flashbacks are rather intrusive.
FAMILY VALUES:  There is a surfeit of profanity as well as some violence and bloody images.
TRIVIAL PURSUIT:  The film was previously titled There Are Monsters.
BEYOND THE THEATER: Amazon, Fandango Now, Google Play, iTunes, Vudu, YouTube
CRITICAL MASS: As of 12/19/16: Rotten Tomatoes: 78% positive reviews. Metacritic: 69/100.
COMPARISON SHOPPING: Cujo
FINAL RATING: 4/10
NEXT: Fantastic Beasts and Where to Find Them