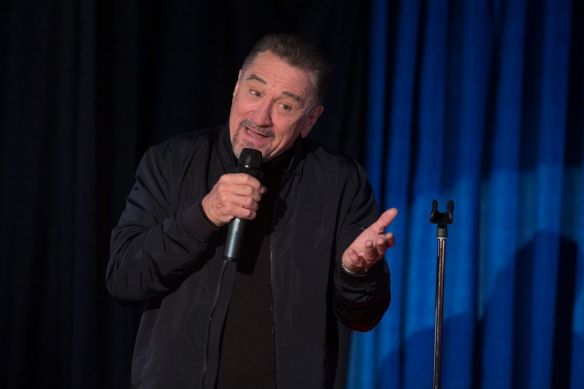 Robert De Niro kills it in an entirely different context.

The life of a stand-up comic is nothing like you might think it is. Glamour is rare for one of those worthies; while someone like a Kevin Hart might work arenas and stay in first class hotels for the most part when stand-ups tour at all they play small clubs and stay in fairly cheap hotels or worse. Sometimes they get a sitcom and things get better but what happens when the sitcom is canceled?

Jackie Burke (De Niro) is living that particular dream. Once on top of the world in the successful sitcom Eddie’s Home back in the 80s, he is back to doing club gigs in his native New York and mostly what audiences want to hear are his signature Eddie catch phrases. At this point Jackie wants to distance himself from Eddie as much as possible but when hecklers push him into a corner and it turns out those same hecklers are trying to goad him deliberately for a vlog, Jackie loses it and ends up getting charged with assault and battery.

Jackie does 30 days jail time and then is given community service at a soup kitchen. The video of his blow up has itself blown up so his long-suffering agent (Falco) can’t get him a bar mitzvah let alone a paying gig. Still, things are looking up – he meets a young woman named Harmony (Mann) who is a co-worker at the soup kitchen. The two hit it off as friends and he takes her to a comedy show where he is asked to go on stage when a comedian cancels at the last minute; his set is one of the best of his career and that starts going viral. Suddenly, things are looking up.

Being Jackie Burke however means that if things are looking up, he must find a way to sabotage himself. It doesn’t help that Harmony has a father (Keitel) who wants her to come back to Florida and work at one of the homes for the elderly that he owns; dad is a bit of a jerk to put it mildly and, well, you can guess the rest.

In fact, that’s a big problem here; you can guess the rest and often do. De Niro remains one of the great actors of his generation and I don’t think he’s ever disgraced himself in a single performance; he is solid enough here and is convincing as a stand-up performer with an anger issue. He is almost always the best part of any movie he’s in and that’s surely the case here.

Mann is herself a capable actress whose appearance in her husband Judd Apatow’s films have been stepping stones to better and more noticeable roles. Some of her dramatic range is hinted at here and I sure wouldn’t mind if we saw her in a wider variety of roles than we’ve heretofore seen her in. Considering the age difference portrayed on screen, the romance feels a bit awkward and at times unbelievable but Mann’s a pro and you can see that there is some chemistry between her and De Niro. She performs more than capably in a movie where she deserved a little better; count me as a fan.

The relationship between colleagues in the stand-up community is very much love-hate. They are competitors often for the same jobs, but at the same time they have the bonds of going into the trenches together, the shared experiences of deprivation, disrespect and dysfunction. They can all relate to one another and there’s often mutual respect but they also heckle each other mercilessly backstage. The movie captures this bond (with a number of working stand-ups playing themselves) beautifully.

The movie falls apart at the end. I won’t go into details but all the good will the movie manages to build up through the first hour plus is wasted with an ending that is equal parts ludicrous and demeaning to the audience. When the lights came up I saw more than one gape-jawed expression on an audience member’s face and I’m sure my own expression wasn’t too dissimilar. Sadly, Hackford and company ignored one of the first rules of comedy; never ever squash your own punchline.

REASONS TO GO: A really terrific cast that for once isn’t wasted drives the film. The depiction of the lives of stand-ups is convincing.
REASONS TO STAY: Some of the scenes feel a little bit awkward and overly familiar. The ending is preposterous.
FAMILY VALUES: There’s plenty of profanity including some fairly crude sexual references.
TRIVIAL PURSUIT: De Niro received stand-up comedy training from Jessica Kirson, whose signature move – talking to herself sotto voce – is one he adapted for the movie.
CRITICAL MASS: As of 3/19/17: Rotten Tomatoes: 25% positive reviews. Metacritic: 40/100.
COMPARISON SHOPPING: Punchline
FINAL RATING: 6/10
NEXT: I Am Not Your Negro