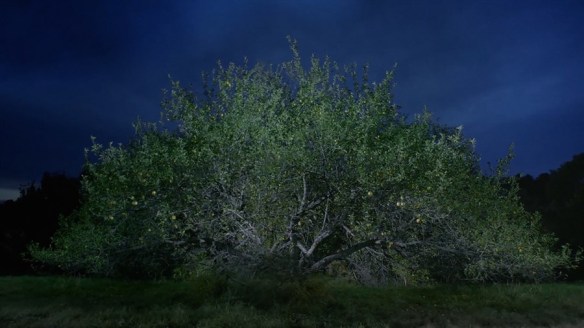 Some of the beautiful imagery used in the film.

In 2008, the decomposing body of a woman was discovered in an abandoned New Hampshire farmhouse. Her shoes were neatly at her side. Nearby two notebooks full of journal entries told the tale of her stay in the farmhouse. She was identified as Linda Bishop, a woman diagnosed with schizoaffective disorder who had walked out of a New Hampshire mental hospital and walked to the farmhouse where she would die of starvation.

This film by veteran documentary producers Jedd and Todd Wider, a brother team best known for their work with Alex Gibney, utilized Bishop’s own words from her journals (spoken by actress Lori Singer) as well as interviews with her sister Joan, her daughter Caitlin, her close friend Kathy as well as psychiatric and medical professionals that treated her, the police officer and medical examiner working her case as well as the Judge who committed her.

The Wider brothers choose to build a story, slowly adding details that complete the picture. We meet Linda as a young woman, charismatic and full of life. We discover her love for the outdoors and nature, and discover that she’s smart, articulate and knowledgeable about the world around her. She gets married, has a daughter, gets divorced but is by all accounts a wonderful mother who is virtually inseparable from her daughter who adores her.

And then the mental illness begins to rear its ugly head. A job as a waitress at a Chinese restaurant is quit because she believes the Chinese mafia is out to get her. This prompts the first of several relocations with her puzzled daughter. Soon it becomes apparent that Linda is incapable of caring for herself, much less her daughter. Caitlin is sent to live with relatives and Linda alternates between lucidity and delusion, depending on how vigilant she is in taking her medication. The problem is that Linda doesn’t believe that she’s ill; as her paranoia deepens, she begins to believe that Joan, one of the last advocates that she has, is out to get her pittance of an inheritance left to her when her dad had passed away. For that reason, Linda refuses to allow Joan power of guardianship, a crucial event which essentially blocks Linda and the rest of the family from getting much of any information about Linda’s care and treatment at all. They aren’t even notified when she’s released. As a result, nobody notices she’s gone while she’s slowly wasting away on a diet mainly of apples she’s picked in the woods and rain water. By that time, Linda had alienated her daughter and her own friends. Only Joan still stood by her and one gets the sense that it was a burden for her.

The movie originated in a story in The New Yorker written by Rachel Aviv who is a producer on the documentary. It is a poignant tale and for the most part it is told well here. The filmmakers for some reason decide to leave some crucial information out – doubtlessly to make it more impactful when it is revealed near the very end of the movie – but I don’t think they’re successful in that matter. We mostly can guess who “Steve” is and his role in the story and as he s mentioned many, many times in Linda’s journal, it gets a bit frustrating.

The cinematography here is absolutely breathtaking. Gerardo Puglia fills the screen with bucolic farmhouses, still winter landscapes and beautifully lit apple trees at sunset. Singer who most will remember from the 1984 version of Footloose reads Bishop’s words with extraordinary depth and even the thick New England landscape does nothing to rob Bishop of her character.

The title is an ironic one; it is taken directly from Linda’s journals in which it is used as an expression of faith. Linda knows that God is aware of her; He knows where she is and will take care of her in the end. However, it can also be construed to be an expression of being lost and there are few souls who were more lost than Linda Bishop was.

The filmmakers very much believe that the mental health care system in this country is badly broken and in all honesty it’s hard to argue with them. In our zeal to protect the rights of the patient we sometimes forget that they often are unable to make informed decisions on their own. The tale of Linda Bishop is a sad one; even in her last days she had a sense of humor and a bluntness that is refreshing and one can only wonder what she would have been like had she continued to take her meds. There’s one certain thing she would have been had she done so – alive.

REASONS TO GO: The cinematography is absolutely gorgeous. The story is truly heartbreaking.
REASONS TO STAY: The identity of Steve, who is mentioned throughout, is withheld until the very end which gets frustrating.
FAMILY VALUES: The theme, having to do with mental illness, is adult.
TRIVIAL PURSUIT: The film won a special jury award at the Hot Docs Film Festival in Toronto last year.
CRITICAL MASS: As of 3/30/17: Rotten Tomatoes: 63% positive reviews. Metacritic: 60/100.
COMPARISON SHOPPING: The Devil and Daniel Johnston
FINAL RATING: 7.5/10
NEXT: For Here or to Go?