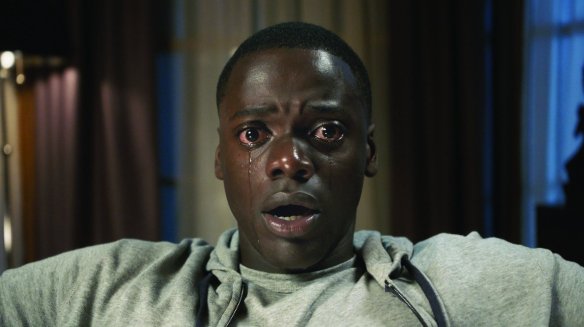 Given the situation and history of race in America, it could be forgiven if some African-Americans might have nightmares that white America is out to get them. Certainly given institutional racism in the past, the need for Black Lives Matter in the present and not a lot of hope for change for the future, life in these United States might seem like one great big horror movie for people of color.

Chris (Kaluuya) is a photographer who’s just getting started in his career. He is an African-American with ties to the community but he also has a white girlfriend – Rose (Williams) who has yet to inform her parents that she’s dating a black guy. But not to worry, she tells him – her parents are liberal progressives from way back. They’ll have no problem with it. When you’re taking your boyfriend to meet your parents for the first time, please understand that those words offer no comfort whatsoever.

Rose’s parents are pretty well-to-do – they have a vacation home in upstate New York that most would probably classify as an estate. Her Dad (Whitford) is a neurosurgeon and her Mom (Keener) a psychiatrist specializing in hypnotherapy. Dad is that kind of guy whose attempts to sound hip and current are awkward and unintentionally funny (“So how long has this thang been going on?” he  asks much to Chris’ bemusement). Mom offers to help cure Chris of his smoking habit which he politely refuses. He doesn’t want anyone messing with his head.

But awkward first meeting weekend gives way to some legitimate misgivings. The African-American domestics Walter (Henderson) and Georgina (Gabriel) seem anachronistic. The bonhomie of a family and friends gathering reveals racism bubbling just under the surface. The drunken brother (Jones) seems unusually aggressive.  Chris has nightmares and realizes that someone has been messing with his head after all. But the messing with Chris’ head is nothing compared with what’s going to mess with ours.

Peele is best known up to now for being part of Key and Peele who have one of the most respected shows on Comedy Central. Methinks that he has something else that he’s going to be best known for. He shows a confident, deft hand which is unusual for a first-time director and he took a nearly microscopic budget for a movie released by a major studio and parlayed it into what is sure to be one of the most profitable movies of the year.

He does it with a smartly written film that lightens the tone of the deeper issues it explores and doesn’t allow the audience to get angry or frustrated given the climate of the times. While I’ve heard some mutterings that the movie is racist towards whites, I would tend to disregard that kind of talk and compare it to certain SNL sketches that poke fun of white stereotypes. We all, after all, have our prejudices whether we admit to them or not.

He also does it with a near-perfect cast of largely unknowns from a feature standpoint although Whitford and Keenan are both veterans and Jones and Stanfield have some good performances under their belts as well. Each cog in the wheel performs exactly as they need to which helps ratchet up the creepy factor when it appears that Chris has entered a weird Stepford Wives town for Caucasians.

As light as Peele keeps it he does save room for some heavy horror moments although there’s not a lot of viscera here. It’s more the concepts that are horrifying rather than any visual gore although there are a few images where Peele brings on the red stuff. He’s not shying away from it so much as using it effectively.

Kaluuya, a British actor playing an American here, has star written all over him. He is absolutely mesmerizing onscreen and delivers an excellent performance that’s bound to get him noticed for more high-profile roles. He reminds me a lot of John Boyega and we all know that his career brought him into the Star Wars universe; something similar could conceivably happen to Kaluuya who I think would make a fantastic John Stewart in the upcoming Green Lantern Corps movie for DC/Warner Brothers.

This is one of those occasions where the critics and the general public have both embraced a film. It’s certainly bound to be one of the better horror movies to come out this year and some might well keep it in mind for one of the best movies of the year period. I’m not quite on board for that kind of lofty praise but this is definitely a movie worth seeking out if you haven’t seen it already and savvy movie buffs are likely to add it to their collection when it comes out on home video later on this year.

REASONS TO GO: A comic-horror look at African-American perceptions and racial stereotypes. There are some good laughs as well as some good scares.
REASONS TO STAY: Some might be made uncomfortable by the film’s attitudes towards racism.
FAMILY VALUES: There is a good amount of violence, some bloody images, profanity and sexual references.
TRIVIAL PURSUIT: Peele became the first African-American director to earn over $100 million at the box office on his debut feature film.
CRITICAL MASS: As of 4/8/17: Rotten Tomatoes: 99% positive reviews. Metacritic: 84/100.
COMPARISON SHOPPING: The Wicker Man
FINAL RATING: 7.5/10
NEXT: My Life as a Zucchini