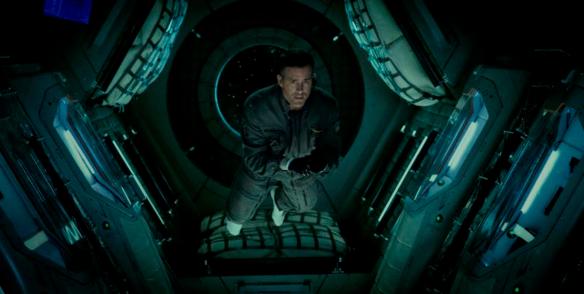 Space, by definition, is lifeless. Space movies shouldn’t be. The best science fiction movies allow us to see ourselves through a window of “what-if.” I suppose that’s true of movies, period.

The International Space Station is on a mission to retrieve a robotic spacecraft returning from Mars. Knocked off of its trajectory by space debris, it hurtles towards the ISS which will have just one opportunity to grab it or else the soil samples and data it collected will be lost forever. Astronaut Rory Adams (Reynolds) snags the spacecraft and brings it into the space station. There, biologist Hugh Derry (Bakare) makes a startling discovery; there is life in the Martian soil. Single celled, maybe, but life nonetheless. The living organism becomes a sensation back at home as the astronauts study it and a naming contest among schoolkids bestow upon the creature the name “Calvin.”

As anyone who has ever seen this kind of movie knows, this doesn’t end well. When Calvin goes dormant, the supposedly brilliant scientists on the space station – presumably with the blessing of colleagues on Earth – decide to use an electrical current to wake up the organism. That’s a pretty rude thing to do to a guest, don’t you think?

Certainly Calvin thinks so and he reacts to the rudeness with homicidal mania. Wouldn’t you? In any case Calvin holds a few xenomorphing surprises up his sleeve…well, he doesn’t have sleeves exactly but you get my meaning. In any case he starts picking off the astronauts one by one and it becomes horribly apparent that the crew must keep Calvin from heading to Earth at all costs – even at the cost of their own lives.

This was originally slated for a summertime release before it was knocked back to March and for good reason; this is a seriously flawed film. For one thing, it follows Ridley Scott’s Alien virtually note for note. I’ll be honest, it’s better to rip off a classic film than a mediocre one but nonetheless the writers don’t offer anything new; it’s just a different kind of xenomorph than the original and it takes place closer to home in both time and place. You could do a pretty decent mash-up with the two movies and never lose a beat.

Espinosa has gotten himself a stellar cast for his movie. Reynolds and Gyllenhaal are two of the most popular stars out there and Reynolds brings the wise-ass persona from his most recent films onto the ISS here. It works rather nicely. Gyllenhaal is a bit more workmanlike, but nonetheless holds the attention of the viewer with his own intensity. He’s a little bit miscast but pulls it off nonetheless.

Most of the rest of the cast is fairly colorless which is a shame because the actors while lesser known than the two leads are solid in the acting department, particularly Sanada and Ferguson. The characters are essentially disposable, meant to be death bait for the CGI alien who is apparently much brighter than the humans because the humans keep putting themselves in situations that are way more dangerous than they have to be. Astronauts are supposed to be smart and in The Martian they were; here, they’re just good looking.

A movie like this is going to live and die on its CGI and the graphics here aren’t bad. Calvin shows up pretty early on and while he morphs into a succeeding variety of creatures each more deadly than the last, we don’t get the mystery we got from the original Alien where the creature wasn’t revealed until much later in the movie. This is a bit of a technical error on the part of the filmmakers. The first part of the movie when we’re meeting Calvin in his initial forms is far more interesting than the bug hunt portion of the film at the end.

I don’t mind films borrowing from other films. There is nothing new under the sun (or apparently under the stars) after all. I just wish there would be just a little bit more variance from the source material. Everything here is way predictable including the ending. This is basically a poster child for wasted opportunity. The idea behind Calvin was a good one; if only they had surrounded him with a story worthy of that imagination

REASONS TO GO: The alien creature is pretty nicely accomplished. Reynolds is on a roll and this kind of film is just tailor-made for him.
REASONS TO STAY: There is definitely a been-there, seen-that feel to the film. The second half of the movie loses what good will the first half builds up.
FAMILY VALUES: There is plenty of foul language and a modicum of sci-fi violence and some gore.
TRIVIAL PURSUIT: Skydance Media, the production company primarily responsible for the film, has been based at Paramount for seven years; not only is this their first film for a distributor other than Paramount, it is also their first R-rated film.
CRITICAL MASS: As of 5/20/17: Rotten Tomatoes: 68% positive reviews. Metacritic: 54/100.
COMPARISON SHOPPING: Alien
FINAL RATING: 6/10
NEXT: Buster’s Mal Heart