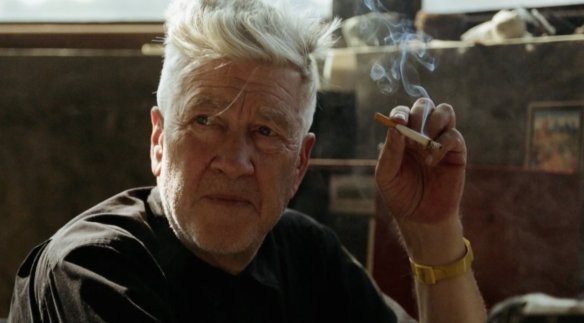 David Lynch is one of the most celebrated, iconoclastic and cerebral directors in cinematic history. From his breakout in 1977 with Eraserhead, his filmography has an impressive list of films including Elephant Man, Dune, Mulholland Drive, Wild at Heart, Blue Velvet, The Straight Story and of course the legendary TV series Twin Peaks which he has just resumed with a sequel on Showtime. While he hasn’t made a narrative feature film since 2006 (Inland Empire), he has remained busy with a plethora of short films (most of which can be found on his website) as well as writing music and painting.

This documentary is mainly directed by longtime admirer Nguyen and the hero worship is evident. Nguyen emulates the style and the pacing of a Lynch film which I suppose is appropriate; therefore rather than getting a straight documentary film that tells Lynch’s story as a filmmaker, we get the director himself narrating the story of his childhood, adolescent and young adult years essentially leading up to Eraserhead. We see that his first love is painting (which he continues to do to this day) and that he lived a fairly normal, suburban life in the 50s and early 60s as his research scientist father moved them regularly to states in the Pacific Northwest and Big Sky country.

Lynch speaks very warmly about his mom who once she discovered his talent at drawing refused to buy him coloring books although she bought them for his siblings. This had the effect of forcing Lynch to use his imagination and coming up with his own pictures rather than filling in the blanks for someone else’s.

So where does the darkness that fills almost all of Lynch’s art, both cinematic and painting, come from? Lynch, notoriously reticent, is cagey about that. He discusses an incident in which he and his siblings were playing outside after dark when a naked woman, bleeding from the mouth, staggered onto the cul-de-sac on which he lived and sat down on the curb and wept. Lynch talks about not knowing what to do, and apparently the incident stayed with him; it sounds very much like a moment out of his own films.

Lynch had a love of painting and when he discovered that the father of one of his school chums was artist Bushnell Keeler, he knew he had a calling. Keeler encouraged him, allowed him to rent space in his workshop and when David’s father threatened to throw him out after the two argued about a curfew, Keeler came to the rescue and assured the elder Lynch that his son was working hard on a passion, something he wished his own son would do. Keeler also helped get Lynch into the Pennsylvania Academy of Fine Arts where Lynch began to thrive.

If you’re looking for a movie that is going to explain the influences on Lynch’s cinematic career, or explore his methodology and inspirations, you’ve not going to find it here. The film ends essentially with Eraserhead and none of his other cinematic works gets so much as a mention here. In true Lynch style, we get next to nothing of what we want to know and instead have to make do with what he’s willing to tell us. That may drive less enthusiastic fans bonkers but his diehard followers will nod sanguinely and enjoy the ride.

This is the rare documentary that isn’t a parade of talking heads. There’s only one here – Lynch himself – and we see him throughout, wreathed in a fog of cigarette smoke (Lynch is more or less a chain smoker and has been since youth), an everpresent glass of Coke at his side. Mostly he paints on-camera although from time to time he plays with his toddler daughter Lula (to whom the film is dedicated) or stares off contemplatively into the distance. This is a bit of a double-edged sword. The film isn’t cluttered but at the same time we get no other viewpoints. We see images of his brothers, his sister, his friends (like the inimitable Jack Fisk) but we don’t hear from them. Everything in this movie is through Lynch’s eyes, or the eyes of the filmmakers.

Consequently we’re left to gaze at Lynch painting, smoking and reminiscing. He can be a charming raconteur but there are times he starts an anecdote, pauses, then says “I can’t talk about that right now” and moves on. Like the painting he is working on, it is left intriguingly but infuriatingly unfinished for the audience. Sadly at least for my part, I found this somewhat boring after awhile. It was the cinematic equivalent of reading a Wikipedia entry and served to make one of the most interesting filmmakers extant actually boring. That’s unforgivable as far as I’m concerned.

REASONS TO GO: The filmmakers do an admirable job of making this look and pace very much like Lynch’s own work.
REASONS TO STAY: This is very much for Lynch fans. We get no other point of view other than Lynch’s own.
FAMILY VALUES: There is a little bit of profanity, some art nudity and a whole lot of smoking.
TRIVIAL PURSUIT: The film was funded through a Kickstarter campaign; those who gave money at a certain level were awarded Producer credits.
BEYOND THE THEATERS: Amazon, iTunes
CRITICAL MASS: As of 5/29/17: Rotten Tomatoes: 89% positive reviews. Metacritic: 75/100.
COMPARISON SHOPPING: Richard Linklater: Dream is Destiny
FINAL RATING:4.5/10
NEXT: Fate of the Furious