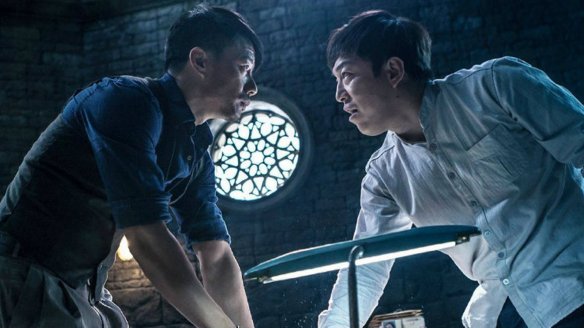 This battle may remain in your memory.

What makes us the person we are? While some would say genetics there are those who insist that it is our memories that make us who we are. If that is true, it stands to reason that if those memories are taken away that we would change as people.

It is the year 2025 and the technology exists to “surgically” remove unwanted memories from the human brain utilizing a Lasik-like device. Bestselling author Jiang Feng (Huang) is undergoing this treatment. He and his wife Zhang Daichen (Xu) are divorcing and he finds his memories of her too painful. However when the procedure is completed she insists that she won’t sign the papers until the memories are reinserted.

Fortunately, the new technology has a kind of “buyer’s remorse” feature that allows those memories to be put back in, although it will take 72 hours for the memories to fully reconstitute. Once that happens, they cannot be removed again. Therefore Zhang can sign the papers and Jiang can have the memories once again removed so long as she signs within three days.

However, something is wrong – Jiang is having flashbacks of murder, a murder he didn’t commit. It soon becomes apparent that a gigantic screw-up has taken place – he’s been given the memories of the wrong man and it turns out that the man is a serial murderer. When Jiang approaches detectives Shen (Duan) and Lei (Liang) they are at first skeptical. As Jiang’s memories become more and more clear they soon realize he’s telling the truth but they lock him up anyway – after all, he could be the actual killer trying to give himself an alibi. He is put under the psychiatric care of Chen Shanshan (Hsu).

Jiang is anxious to co-operate but he has an ulterior motive; it stands to reason that if he has the wrong memories, the real killer has his own. With his wife Daichen in mortal danger, Jiang gets more and more frantic. Worse still, the memories are  beginning to change Jiang fundamentally, turning him from a gentle, sweet man into an angry violent one. Can the murders be solved before Jiang loses his personality to the unwanted one taking over his mind?

This is essentially a cop thriller with sci-fi overtones but those who are less comfortable with speculative fiction be of good cheer – other than the memory removal machine, there is little that distinguishes 2017 from 2025, although the production design has a sleek modern look to it. The memory switch is essentially a plot device and the mechanics and ramifications of it are not explored at any great length. That’s a bit of a shame because it’s a nifty premise but the filmmakers seem content to go full-on psychological thriller.

Huang has a bit of a hangdog look early on but as the movie progresses he becomes a bit more unstable and at times frankly scary. His unwanted memories contain scenes of serious domestic abuse and it becomes a major thematic element of the film. The psychology of abuse – the victim’s tendency to make excuses for the abuser, the assurance that the violence is an aberration and not a trend, the victim-blaming – all of it is part of the story. Huang captures both the sweet Jiang and the scary Jiang with nimble ease.

Chen uses the hoary old device of filming the flashbacks in black and white but it ends up making sense, particularly since cinematographer Charlie Lam is not only comfortable with the medium but also adept. Some of the most beautiful scenes in the film are the ones with the ugliest subject matter, and that is all Lam’s doing.

I would have liked to see a bit more of the sci-fi element emphasized; it makes the memory removal surgery seem exclusively a plot point rather than something that is a part of life as it is in other movies that use the conceit. That aside, this is an extremely well-made and well-written thriller with plenty of twists and turns including a final swerve which is at least a pretty nifty idea although the execution could have used some work. This is the kind of film I could see being remade as a Hollywood production. It has all the right elements for a box office winner. Those who appreciate good psychological thrillers should keep a sharp eye out for this one.

REASONS TO GO: The concept is absolutely terrific. The ending twist is one of the best I’ve seen recently. Some of the memory removal mythology is well-considered. Domestic abuse is utilized as a theme about as well as it could be.
REASONS TO STAY: The thriller element is somewhat by-the-numbers. The film runs quite a bit too long..
FAMILY VALUES: There is some violence and related disturbing images
TRIVIAL PURSUIT: This is the second psychological thriller Chen has made starring a member of China’s hugely popular Lost In slapstick comedy series.
CRITICAL MASS: As of 7/25/17: Rotten Tomatoes: No score yet. Metacritic: No score yet.
COMPARISON SHOPPING: Eternal Sunshine of the Spotless Mind
FINAL RATING: 8/10
NEXT: Road to Mandalay