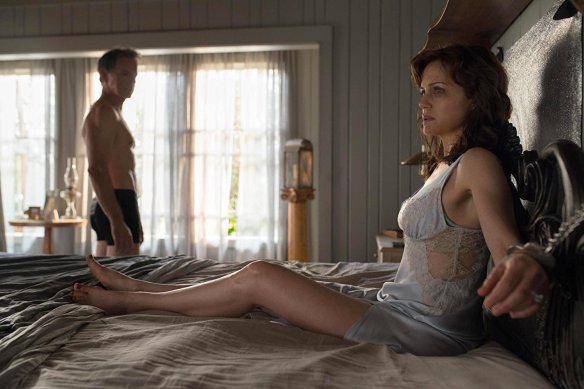 It has been the year of Stephen King adaptations, with Dark Tower and It having already made their theatrical runs and 1922 recently released on Netflix. This adaptation is of particular interest because 1) Mike Flanagan, who has been impressive with Oculus and Hush, is in the director’s chair here and 2), this is one of King’s lesser works that was thought to be virtually unfilmable. How wrong they were.

One can see why that thought occurred however. The movie is mostly set in a single bedroom with the protagonist alone and immobile for the bulk of the story. There is also a kinky sexuality to it that in the current atmosphere is both timely and perhaps may incite a certain segment of the population to point their fingers and cry shrilly “Objectification! Objectification! Objectification!” We are, these days, gunshy about sex (particularly of the kinkier variety) on both sides of the political aisle.

The marriage between successful attorney Gerald (Greenwood) and his trophy wife Jessie (Gugino) has been troubled for some time now and the two decide to take a romantic trip to a beautiful but remote vacation cabin to try and heat things up. Gerald’s idea of romance is a lot different than Jessie’s however; he wants to handcuff her to the bed and enact a rape fantasy on his wife. At first she goes along with it, but as Gerald gets deeper into the game she freaks out and demands that he stop and free her. At first he is petulant, like a little boy who’s been told he can’t have a cookie. Then he does what most little boys don’t do – he has a heart attack and dies.

Slowly the realization comes to Jessie that she is in an absolutely terrifying predicament; she has no way to free herself from the stainless steel cuffs, no way to get food or water and she is sharing the bedroom with her husband’s corpse and a hungry dog who is desperate enough to enjoy some Gerald tartare. As panic begins to set in and she realizes that nobody can hear her screams, she begins to speak with the angels and devils of her better nature – her angels represented by a strong, self-possessed version of herself and her devils by Gerald himself. While Gerald mostly relates the scenarios in which she dies a horrible death, the alter-Jessie figures out ingenious ways to get water and eventually to concoct a desperate plan to escape – one that will take all of the actual Jessie’s willpower and courage.

But there is soon another player in the play; a deathly, spectral figure with a bag of bones who is stalking her after dark. She realizes that as the last evening falls that he will come for her in the night…and she will join her husband as potential puppy chow if she doesn’t escape before then.

The script follows King’s book pretty faithfully but it lacks the sense of dread and terror that King was able to weave in the book – but to be fair, not every writer is as talented at that particular skill as King is. In fact, very few writers are. Flanagan and his co-writer Jeff Howard turn this more into a suspense film than a supernatural thriller which is what King produced – but the Moonlight Man is excellently rendered, I’ll give them that.

I’ll also give you that this is the performance that I’ve been waiting for Gugino to deliver. It’s masterful as she captures both the strong, self-assured side of Jessie and the frightened, wounded and disregarded part of her. She spends nearly the entire movie in a negligee (and looks mighty fine doing it) but you never get a sense of her being exploited (although some may disagree); she’s a woman who is comfortable with her sexuality and one senses that if Gerald had actually had a romantic weekend getaway planned instead of a kinkfest, he’d have gotten plenty of action.

She and Greenwood actually work very well together. Greenwood is sixty-plus at this point but he looks a lot more buff than the overweight Gerald of the book; it’s possible that Gerald’s use of that Little Blue Pill may have been what done him in. The relationship between Jessie and Gerald is believable; these are people who feel like they’ve been together for awhile but have begun to diverge away from one another and neither one knows really how to get back on the same page – or if it’s even possible. They remain civil to one another but there is that undercurrent of tension between them that tells a story of frustrations not voiced and petty arguments that are.

There is a subplot about Jessie’s past about a terrible incident that takes place during a rare total eclipse that does a lot to explain her backstory. It’s sensitively handled and again is pretty timely considering the events of recent months but it might be a little disturbing for people who have a history of childhood sexual abuse.

All in all this turned out much better than I think most of us had a right to expect. It re-emphasizes that Flanagan is the genuine article, a master of horror films who tends to elevate every project he works on and this one is no exception. Not only is it maybe the best adaptation of King you’ll see this year, it is one of the better original films you’ll see on Netflix this year as well.

REASONS TO GO: Gugino gives a career-defining performance and she works very well with Greenwood. The plot is fiendishly clever.
REASONS TO STAY: The movie is not nearly as creepy as the book.
FAMILY VALUES: There is profanity, a good deal of sexuality and some disturbing images and gore.
TRIVIAL PURSUIT: Dialogue and plot devices from the film reference such Stephen King books as Dolores Claiborne, Cujo and The Dark Tower.
BEYOND THE THEATERS: Netflix
CRITICAL MASS: As of 10/30/17: Rotten Tomatoes: 90% positive reviews. Metacritic: 76/100.
COMPARISON SHOPPING: The Girlfriend Experience
FINAL RATING: 7.5/10
NEXT: More of Six Days of Darkness