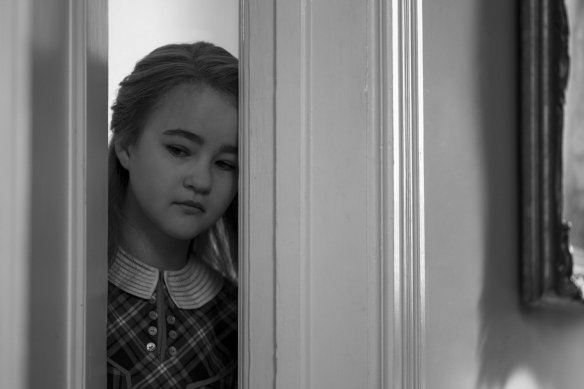 Sometimes the most exciting adventures can start on the other side of a closed door.

The difference between childish and childlike is the difference between being self-focused and being struck by wonder. In the former, all we can think about is our immediate desires; in the latter, the world is fresh and new and worthy of exploration. Deep down, all of us yearn to be wonder struck.

It is 1977 and Ben (Fegley) is grieving the loss of his mother (Williams) in a car accident. He doesn’t know who his father is and his mother refused to discuss the matter, wanting him to wait until he was older but she passed before she could tell him what he wants, what he needs to know. Sent to live with his aunt (Hargreaves), he sometimes sneaks back to his old house to immerse himself in the things that surrounded him. There he finds a clue to his father’s identity on a bookmark with a New York City address, a far journey from his Gunflint, Minnesota address. On his way back to his aunt’s, he is struck by lightning and left deaf.

It is 1927 and Rose (Simmonds) has been deaf all her life. Her overbearing father (Urbaniak) wants her to learn how to lip read but she’s having none of the tedious lessons from an insensitive teacher. She is obsessed with silent screen star Lillian Mayhew (Moore) who is performing on Broadway so she leaves her Hoboken, NJ mansion and runs away to the city to see her idol.

Both of these children will encounter New York’s Museum of Natural History – the one where the displays come to life after dark if such things can be believed. Both will be captivated by similar displays and both are connected over time without knowing it.

Haynes is an extraordinary visual director who tends to favor films that are concerned with transformative experiences, so in a sense this is right in his wheelhouse but at the same time it’s a bit of a departure for him. The film is a lot more mainstream than his films normally are – although his last one, Carol, was Oscar-nominated and was at least a modest success but it certainly couldn’t be described accurately as “mainstream.”

Some distinctions need to be made here; this is a film about children but it isn’t a children’s film. While some kids who are a bit more eclectic in their cinematic taste might appreciate it, it is adults who are going to find more magic here than the younger set. Haynes has always had a really good sense of era; the 1977 sequences are in garish color and as Ben emerges from a trash-strewn Port Authority to the strains of Deodato’s funky version of Also Sprach Zarathustra which is perfect for the moment. We see New York in a moment where it is grimy, gritty and harsh, a city decaying from its grandeur but still confident in its greatness. The 1927 sequences are in black and white and are silent which is also appropriate; in these sequences New York is magical, the center of the world, the place everyone wants to be and for good reason. Haynes and editor Alfonso Gonçalves skillfully weave the two stories into a viable whole without jarring the audience, a masterful feat.

Here I must mention the music. I’ve never been a huge Carter Burwell fan but this is by far his most brilliant score to date. It is the kind of music that breaks the heart and centers the viewer in both eras. The use of period music, particularly in the more recent sequence, is near-perfection and hearing two era-appropriate versions of David Bowie’s “A Space Oddity” shows not only intelligent planning on the matter of music but a good deal of intuition. I don’t often buy film scores but I just might this one.

This is based on a book by Brian Selznick (who also did the book that spawned Martin Scorsese’s Hugo) and Selznick wrote the screenplay. I haven’t read the book but judging on what I saw on screen it couldn’t have been an easy adaptation. I do have some complaints about the film however; there were a few too many plot contrivances that made this feel like one of the Disney Channel’s weaker efforts at times and distracted from the overall magic of the film. Also Fegley was somewhat over-the-top in his performance; he should have been instructed to dial things down somewhat. Simmonds was much more effective in her role. Moore, who has collaborated with Haynes on four films now, shines as the silent film star but more so in a mystery role that she appears in near the film’s conclusion – more I will not tell you.

Capturing the sense of wonder of childhood is no easy task and Haynes can be forgiven if he wasn’t always entirely successful. We do get a sense of the frustration that physical limitations can put on someone and while this isn’t the definitive story about deafness, it is at least one that I think that the non-hearing community will appreciate. I wasn’t quite wonder struck by Wonderstruck but I did appreciate it and I do recommend it and I think that you will enjoy it if you give it half a chance.

REASONS TO GO: The score is amazing. Making the 1920s sequences silent and black and white is very clever.
REASONS TO STAY: Fegley is a little bit hammy. Overall the movie is a bit Disney Channel-esque.
FAMILY VALUES: The themes are a little bit on the adult side.
TRIVIAL PURSUIT: Simmonds is deaf in real life; her performance so moved Will Smith at the film’s Cannes screening that he personally congratulated the young actress.
CRITICAL MASS: As of 11/10/17: Rotten Tomatoes: 71% positive reviews. Metacritic: 72/100.
COMPARISON SHOPPING: Life in Wartime
FINAL RATING: 6.5/10
NEXT: A Murder in Mansfield