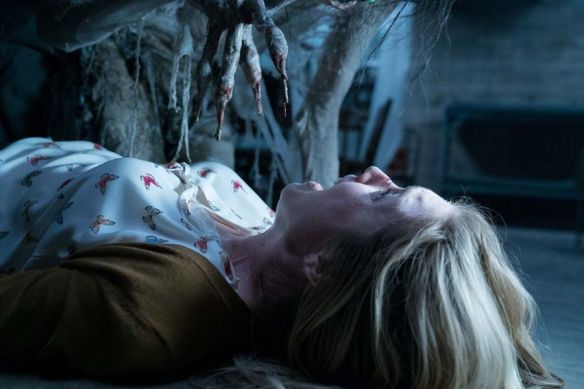 Someone needs a manicure badly.

Horror franchises can be very lucrative indeed for a studio. Look at the Friday the 13th franchise for Paramount, the Paranormal Activity franchise for the same studio and the Nightmare on Elm Street and the Conjuring universe for New Line. It’s hard to know where Lionsgate would be had it not for the money generated by the Saw franchise years ago.

Insidious has been part of a renaissance of horror franchises that have taken hold of studio imaginations. For the most part these horror franchises are very cheap to produce and can generate tens and even hundreds of millions of box office profits when all is said and done. They may not be prestige projects or win many awards – or even gain much critical respect – but they are vital to a studio’s bottom line. Insidious has for the most part (especially in the second two of the four chapters to date) followed the story of Elise Rainier, a psychic who is able to communicate with the dead and sometimes venture into a dimension she calls The Further in which the living and the dead can sometimes interact – although it is the supernatural who reign there.

Like the previous installment, this is a prequel. Elise Rainier (Shaye) is at home when she gets a call from a potential client in a small New Mexico town. When she hears the address, immediately it becomes obvious that she is terrified as she abruptly declines to take the job and hangs up.

That’s because the address is her own childhood home, now occupied by a lone man named Ted Garza (Acevedo). As a child (Kolker) and as a teen (Hayes) as her abilities were manifesting themselves, she was tortured by the souls of those who had died in the nearby prison where her abusive father (Stewart) works. He not only doesn’t believe in the supernatural, he thinks his daughter is crazy and whenever she confesses that she has witnessed something supernatural, she is beaten with a cane.

Eventually she runs off leaving her brother Christian to survive alone with his dad but not before she unknowingly allows a terrible entity into this world which ends up killing her loving and supportive mother (Ferrer). Troubled not only by the memories of the abuse she suffered but also haunted by the guilt over her mother’s death, she realizes she can’t find peace until she faces her own demons – literally. So with her assistants Specs (Whannell, who directed the last one) and Tucker (Sampson), she goes to Five Keys to do battle with evil.

There she’ll meet her now-grown brother (Davison) who hasn’t yet forgiven her for abandoning him, and his daughters Imogen (Gerard) and Melissa (Locke) who are both fetching which attracts the attention of Specs and Tucker but also Elise realizes that one of them may have inherited the gift/curse that she possesses.

Elise is one of the most admirable horror heroines ever created. Generally most horror franchises are about the monster and rarely is there a single hero that runs through the series. Insidious is the reverse of that (as is, to be fair, The Conjuring) but in the case of Elise, she is not a young person; Shaye is a rare hero of a certain age group (let’s call it AARP-friendly) who appeals to young people as well as others. She is grandmotherly at times but she kicks spiritual booty when she needs to. There has never been a heroine quite like her and in this film Shaye is at her absolute best.

In fact it’s safe to say that the acting is pretty solid all around. Sure, the two nieces are pretty much interchangeable and Whannell and Sampson occasionally try a little too hard for comedy relief but Davison is a savvy pro who compliments Shaye nicely and Ferrer does a bang-up job as the ill-fated mom. Acevedo also gets kudos for taking a character who has some depth and translating it into performance.

The Insidious series has never been gore-heavy and also quite frankly not really overloaded with scares as well, which makes it a target for some derision in horror fanboy circles. I’ve always appreciated that the scares in the first three movies are well-earned and if there are occasionally an over-reliance on jump scares (or startle scares as I like to call them) when they do go out to get you they generally succeed.

The one thing that keeps this from a higher score in my book is the ending; the final confrontation is a big letdown and is that unusual situation where it should have  gone on longer, even though because this is a prequel you pretty much know the outcome because…well, certain characters HAVE to survive or else the continuity is completely shot to hell. Of course, one of these days a franchise picture is going to shock the living daylights out of us by killing a character who is shown to have survived in one of the earlier films. Perhaps that will cause a paradox that will bring the whole universe to an end – or perhaps just a portion of it, like all politicians. That would be worth it, I’m sure we can all agree.

REASONS TO GO: This could be the best performance by Shaye in the series. In general, the acting is better than the average horror film.
REASONS TO STAY: This installment is a little bit less scary than other films in the franchise. The final confrontation between Elise and the demon is a bit anti-climactic.
FAMILY VALUES: There is some disturbing thematic content and imagery, horror violence, scenes of terror and occasional profanity. There are also a couple of scenes of child abuse.
TRIVIAL PURSUIT: This film is meant to conclude the prequel series for the franchise, leading to sequels that may or may not continue the character of Elise Rainier.
CRITICAL MASS: As of 2/7/18: Rotten Tomatoes: 31% positive reviews. Metacritic: 49/100.
COMPARISON SHOPPING: Annabelle
FINAL RATING: 6.5/10
NEXT: Downsizing