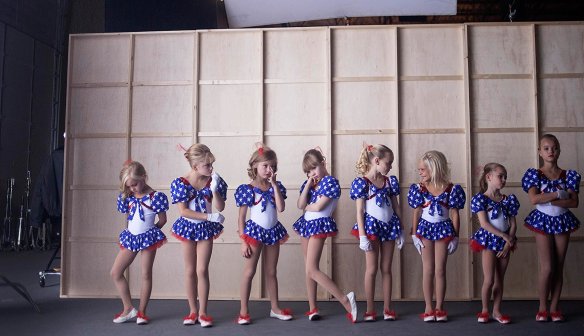 A gaggle of beauty queens await their call.

The murder of JonBenet Ramsey has captured the attention of the American public for more than 20 years now. The six-year-old beauty pageant entrant was found missing on Christmas Eve 1996 with a four-page ransom note found on the staircase; hours later on Christmas Day her body was found in the basement wrapped in a blanket, her head savagely bludgeoned and then strangled by the neck. It is possible that she was sexually assaulted in her last minutes on earth.

The Ramsey family of Boulder, Colorado came under intense media scrutiny; stories didn’t add up and accusations were flung, some fairly ludicrous. Her mother Patsy, her father John and her brother Burke were all at one time or another suspects of the police investigation, which became notorious for its incompetence.

Documentarian Kitty Green took a unique tactic looking at the JonBenet murder. While we have seen plenty of newsmagazine crime show segments and similarly-themed documentaries looking at the murder, Green chose instead to film over 15 months in Boulder, interviewing local actors who were ostensibly auditioning for a movie about the murder.

Boulder being a small college town, it’s unsurprising that some of the actors (some of whom were professional, some not) had personal connections to the Ramsey family; one had a girlfriend at the time of the murder who was John Ramsey’s personal assistant. Another had an aunt who lived in the neighborhood. Another gave vocal lessons to JonBenet herself. All of them who had lived in Boulder in ’96 had opinions of who did it.

We get some of the facts of the case through re-enactments and through anecdotes but if you’re looking for a police procedural or a historical examination of the events that took place, look elsewhere. Green’s aim is not to present an examination of the murder from a typical sense but to see how the murder affected not only the people of Boulder but by extension, the rest of us in America.

As the movie goes on, the camera becomes kind of a confessional and the Ramsey case triggers memories of personal tragedies. One man relates to John Ramsey because he himself was accused of murdering a loved one (he was found innocent and the investigation into him was dropped); another actress remembers the murder of a sibling and how it tore apart her household.

Some of the women empathized with Patsy Ramsey, breaking into tears at the thought of their own child being found alone in a cellar, wrapped in a blanket after being brutally murdered. Those are the moments that the movie works best, giving the viewer an anchor to latch onto. When Green goes the more esoteric route (such as a tracking shot near the end in which the actors act out a variety of the many theories about the murder) the film is less successful.

It has been said about the case that nobody knows the truth but everyone has an opinion. Possibly that’s the message that Green was trying to send but her intentions are a little vague. There aren’t any experts in the facts of the case being interviewed so what we are mostly getting are amateur opinions and you may or may not have any use for those.

Still it makes for compelling viewing into human nature; along with the Lindbergh baby, the assassination of JFK and the OJ Simpson case, the JonBenet Ramsey murder captured the public attention like few other crimes in the 20th century. That it remains unsolved to this day is perhaps part of the attraction; that we’ll likely never know what happened in that basement Christmas Eve adds to the tragedy.

REASONS TO GO: There are some moments that pack a powerful emotional punch. This is an at times fascinating take on a story everyone knows generally but not in detail.
REASONS TO STAY: It’s more of a social experiment than a documentary. I’m not entirely sure what the point was in making this.
FAMILY VALUES: There is some profanity, sexual innuendo and disturbing content.
TRIVIAL PURSUIT: The film debuted at the 2017 edition of Sundance.
BEYOND THE THEATERS: Netflix
CRITICAL MASS: As of 2/19/18: Rotten Tomatoes: 80% positive reviews. Metacritic: 74/100.
COMPARISON SHOPPING: Kate Plays Christine
FINAL RATING: 6/10
NEXT: The Post