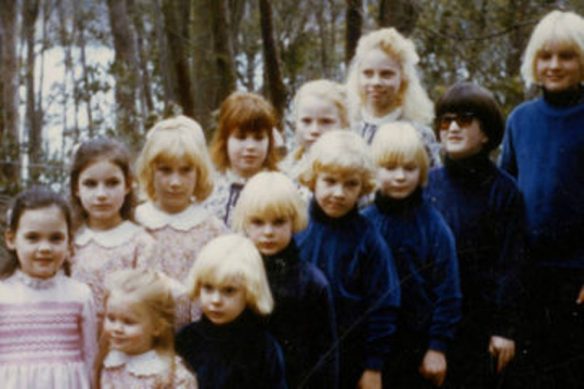 Introducing the children of the corn.

The rise of quasi-religious cults in the 1960s and 1970s was a worldwide phenomenon. In Australia, one of the most notorious of these was a Melbourne-based cult known as The Family. Founded by psychologist Raynor Johnson as a means to a healthier lifestyle, he soon fell under the spell of former yoga teacher Anne Hamilton-Byrne, a beautiful and charismatic blonde who had a way of charming everyone around her.

Her idea of family was a literal one; dozens of children were adopted through dodgy means and born to existing members. Hamilton-Byrne preached that she was the reincarnation of Jesus Christ and that there was a holocaust coming; the kids would rise as the leaders of a post-apocalyptic civilization. She was obviously a wack job but as cults go that doesn’t seem to be too terribly different.

In 1987 the cult’s Ferny Creek compound was raided and six of the children were removed and placed in protective custody and soon the horrifying truth began to emerge. The children had been physically abused, manipulated, and lived in a state of constant fear. Forced to dress alike and have their hair dyed blonde (as Hamilton-Byrne’s was) they were robbed of their individual identities. They were given LSD often without their knowledge or consent and they were often starved as a means of punishment.

One of the officers who was on the raid, Detective Sgt. Lex de Man, was clearly haunted by what he saw and observed. He acts somewhat as a narrative guide but also was a consultant on the documentary. Some of the stories told by the now-adult former cultists are heartbreaking and/or hair-raising. Many of the kids required therapy once removed from the clutches of the cult.

Jones is something of an Errol Morris disciple in terms of her style. There are plenty of interviews buttressed with home movies (which are chilling) and recreations of certain events. Rather than as a typical documentary, she gives it a kind of a 48 Hours spin, presenting the events as an unfolding mystery. For American audiences, it truly is – although the story was huge in Oz back in the late 80s and early 90s, it scarcely made a ripple on various American news sources. The film is slickly made with a brilliant atmospheric score and while the ending doesn’t have the smooth pacing of the rest of the film, there is at least a satisfactory wrapping up although to be fair the issues that the survivors have is ongoing. Believe it or not, the cult still exists today and Jones does speak with a current member for perspective.

The documentary has won awards at Australian film festivals and received a limited theatrical release there last year. Here in the States, it’s available on Starz and on their companion streaming app although for how long is anyone’s guess. It is certainly worth looking into, particularly if you’re into true crime documentaries.

REASONS TO GO: A chilling story of the horrors perpetrated on children within a notorious cult.
REASONS TO STAY: The ending is a bit choppy.
FAMILY VALUES: There is some adult content including some sexual references.
TRIVIAL PURSUIT: The score was composed by Amanda Brown, a former member of the wonderful Australian band The Go-Betweens.
CRITICAL MASS: As of 3/27/18: Rotten Tomatoes: 100% positive reviews. Metacritic: No score yet.
COMPARISON SHOPPING: Prophet’s Prey
FINAL RATING: 6.5/10
NEXT: Winchester