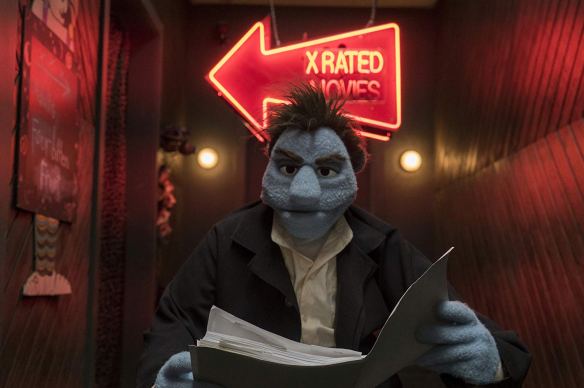 As the puppet cast of an 80s children’s show begins to get bumped off one by one a disgraced L.A. police detective takes on the case. Her investigation takes her into the seamy side of puppet life. Parents, please note the rating on the movie – it is most definitely not for kids!!!

See the trailer, interviews, clips, video featurettes and B-roll footage here
For more on the movie this is the website
Release Formats: Standard
Genre: Comedy
Now Playing: Wide Release
Rating: R (for strong crude sexual content and language throughout, and some drug material)

(Global Road) Thomas Jane, Becky G, Alex Neustaedter, Ted McGinley. A robotic dog developed for military use who is relegated to a desert scrapheap after a test goes wrong is discovered by a teen boy who is a bit of an outsider himself. The robot develops a bond with the boy and will go to great lengths to protect him; the scientists who created him will go to any lengths to get the dog back.

(ArtAfects) Benjamin A. Onyango, Scott William Winters, Emily Hahn, Caitlin Nicol-Thomas. Three fathers fight to save their families from widely divergent perils but their stories converge on this true story-based drama which teaches the value of forgiveness and reconciliation.

(FilmRise) Chloe Grace Moretz, Jennifer Ehle, Steven Hauck, Marin Ireland. After a young girl is discovered with another girl in the backseat of a car at the 1993 high school prom, her devout guardians ship her off to gay therapy conversion camp to discipline the gay out of her. Instead, she finds a community of fellow outcasts and for the first time begins to feel like she belongs.

(Bleecker Street) Charlie Hunnam, Rami Malek, Tommy Flanagan, Eve Hewson. Wrongfully convicted of the murder of a pimp, a Frenchman is set to the penal colony of Devil’s Island in Guyana where he strikes up an unlikely friendship with a convicted counterfeiter. The brutal and inhuman conditions lead him to make multiple escape attempts. Eventually he wrote a book about his experiences which became an acclaimed movie in 1973 starring Steve McQueen and Dustin Hoffman; since then allegations have surfaced that the book was a fabrication.

Scotty and the Secret History of Hollywood

(Greenwich) Scotty Bowers, Peter Bart, Stephen Fry, William Mann. The strange but true story of Bowers who was a handsome ex-Marine who came to Hollywood shortly after the Second World War. He became a confidante and aide-de-camp to many Hollywood stars. Eventually he began to connect those who had to hire their sexual orientation with partners that allowed them to exercise their needs. This played the Florida Film Festival this past spring.

See the trailer and a video featurette here
For more on the movie this is the website
Release Formats: Standard
Genre: Documentary
Now Playing: Enzian Theater
Rating: NR

Along With the Gods: The Last 49 Days
McQueen
Neevevaru
Skate Kitchen
Summer 1993