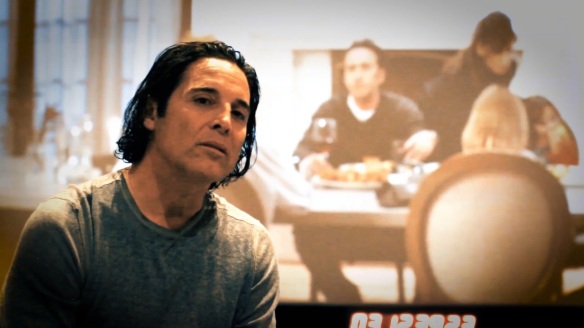 It goes without saying that it takes a certain amount of ego to be a successful Hollywood motion picture director. You need that ego to maintain focus on your vision and refuse to let compromise and collaboration dilute it or divert it. Without that ego, a director’s crew, his/her actors and financial backers will walk all over them like a linoleum runner on your mom’s best carpet.

Jonathan Baker is nothing if not ambitious. Not only does he want to direct movies, he wants to be really good at it – Oscar-winning good, name above the title good. He was getting ready to direct his first feature film – a suspense film from Lionsgate called Inconceivable with a stellar cast including Nicolas Cage, Faye Dunaway and Gina Gershon. Baker wisely figured out that he could avoid a lot of pitfalls by talking to other directors and finding out what their experiences were on their first films – and what advice they had for an aspiring director.

The interviews with such luminaries as Foster (Little Man Tate), Badham (Blue Thunder), Hackford (Ray) and Lyne (Fatal Attraction) are actually mega-informative and have some good advice for those who want to direct movies as a career – in fact much of their advice can be applied to leadership roles in other fields as well.

Baker is clearly passionate about film and filmmaking and I have no doubt that he wanted to make the best film he could. He talks about the interference and lack of faith from the studio, the bond holders and even his own crew. Often he felt that it was “me versus them alone on an island,” a comparison he uses more than once. Overcoming these sorts of hurtles and completing his film was a Herculean effort that is worth respecting.

But Baker is also extremely full of himself. Some might remember him from The Amazing Race 6 which he ran with his then-wife Victoria Fuller and became one of the most hated contestants in the history of the show, allegedly shoving his wife to the ground in anger after losing a foot race to the rest stop for one of the legs in Paris. While Baker maintained that he would never hit his wife (and the tape is inconclusive as to whether she lost her footing or if he shoved her), he certainly verbally abused her throughout the race. He seems a lot calmer now.

Getting back to the present, Baker drops names incessantly, particularly that of Warren Beatty whom he characterizes as his mentor – not once but at least a good half a dozen times during the film. He also mentions that he owns Beatty’s first house, which he claims that the legendary actor/director wouldn’t have sold to just anybody. We’ll just have to take your word on that one, Mr. Baker.

So much of the movie we’re made to watch Baker walking down streets, walking in parks, sitting in an editing bay…at times it is difficult to figure out whether this is meant to be an instructional documentary or a biographical one, omitting his stint on The Amazing Race which brought him notoriety and fame enough that likely opened a few doors for him.

Baker’s advice often comes off as a means of pumping himself up, to illustrate that he had the inner strength and purity of vision to withstand all of the obstacles and in honesty those obstacles were considerable. When he concentrates on the other directors and their experiences – even on his own experiences – the movie is at its best. When we hear the actors on his single feature film describe what it’s like to work with the Iconic (eventually) Jonathan Baker, or hear Baker talking about how talented and strong in character he is, well, it comes off more like a love letter to himself.

Director Neal Thibedeau doesn’t do himself any favors by inserting as many random issues that are sometimes only tangentially related to what’s being discussed onscreen as possible. He also managed to get a soundtrack which sounds like it belongs on a 1980s action film, preferably one based on G.I. Joe. The two elements together take a movie that needs all the help it can get and lets it drown in shallow water.

Not to discount Baker’s accomplishment in getting his film made, but it should be noted that Inconceivable carries with it a Rotten Tomatoes score of 31, not a number that speaks of a natural talent immediately making waves. Baker has a considerable distance to go before becoming iconic – even some of the directors interviewed here are experienced rather than iconic. That’s not to say that Baker one day won’t make amazing, insightful award-worthy films but in the meantime it might serve him well to remember that along with a healthy ego a good director needs humility as well.

REASONS TO GO: Hearing some of the stories by the likes of Foster, Hackford, Lyne and Badham is invaluable particularly to budding filmmakers but also budding leaders of other fields as well.
REASONS TO STAY: The name-dropping and self-promotion wears one down. This may come off a little bit as “Movie Directing 101” for first year film students. There are a lot of visual non-sequiturs and the soundtrack is inappropriate.
FAMILY VALUES: There is some mild profanity.
TRIVIAL PURSUIT: As of this writing Baker is in pre-production on his second feature film.
BEYOND THE THEATERS: Amazon, iTunes
CRITICAL MASS: As of 12/17/18: Rotten Tomatoes: No score yet: Metacritic: No score yet.
COMPARISON SHOPPING: The Kid Stays in the Picture
FINAL RATING: 3/10
NEXT: Islam and the Future of Tolerance