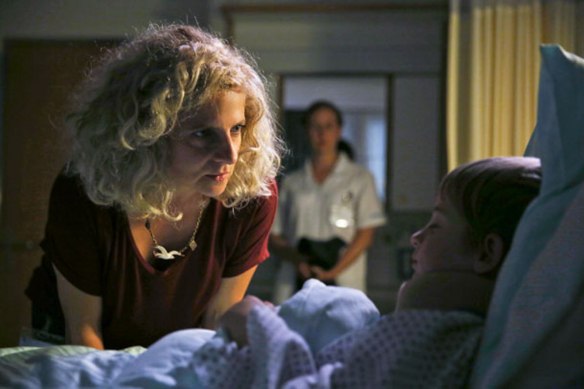 A late night call brings a psychologist to the bedside of the survivor of a tragedy.

Seeing a movie you have no information about can be a double-edged sword; for one, you have no expectations other than that which the title gives you. That can be good and bad; without any prejudices, you can be pleasantly surprised. However, the title can mislead you into thinking that you’re seeing one type of movie when it is in fact a different type of film altogether.

Such is the case with Swiss export Dark Fortune which was recently released on home video after some one-off screenings in New York and San Francisco and film festival appearances. Eliane Hess (E. Haupt, the director’s wife), a psychologist, receives an urgent late night call summoning her to a hospital where a young boy has been taken after a car crash. It is her sad task to break the news to him that his entire family perished in the crash – the boy is the only survivor.

Yves (Ricklin) is clearly (and understandably) in a fragile emotional state and it doesn’t help matters that his paternal grandmother (Rothlisberger) and maternal aunt (Flotron) are engaged in a bitter tug-of-war for custody for the young boy. It becomes Eliane’s task to determine the boy’s emotional state and recommend the best fit for the boy’s needs in the custody battle. Yves is allowed to go live with Eliane and her teenage daughters Helen (Pluss) – the stable one – and Alice (Bar), the angry teen with whom Eliane has been butting heads over her destructive behaviors.

Helen takes to the boy immediately and becomes something of a big sister to him; Alice, the bitchy one, wonders aloud how long they have to put up with his invasion of their home but then, inexplicably, gives him a stuffed animal (a lynx) to comfort him, indicating that she’s Not So Bad After All. The presence of Yves brings long-simmering sore points for the daughters to the surface, mainly having to do with their fathers and why Eliane is no longer with them. In the meantime, Yves harbors a terrible secret that is tearing him apart from the inside out.

The title of the movie seems to indicate that it is some sort of thriller but it is far from it, although at times the movie hints at possible supernatural elements that go nowhere. This is essentially a family drama with psychological overtones which is a whole lot less sexy but no less intriguing for true film buffs.

The cast is solid and smart. Eleni Haupt is fine as Eliane, showing her cool and objective professional demeanor is a ruse hiding a deeply fragile psyche of her own that threatens to collapse over the weight of failed relationships and loneliness. Hug is strong as an amiable ex of Eliane’s whom Yves takes a shining to. While Pluss doesn’t have a whole lot to work with as Helen, Bar takes the teen bitch part of Alice and runs with it.

The movie revolves around the relationship between the girls and Yves, and Ricklin who plays the boy rises to the task. He’s not meant to carry the film per se but he is right in the center of it and delivers a performance well beyond his years. I’m not usually one to gush over child actors but this is one of the deepest and most satisfying portrayals of a troubled child since Haley Joel Osment saw dead people.

I also loved the semi-liturgical music that gives the movie a sort of hypnotic solemn air. Haupt uses a lot of religious art in the background but the movie isn’t a sermon by any stretch of the imagination; there just are subtle hints of a higher power which may irk those who are sensitive to such things. Sadly, whoever was responsible for either composing or assembling the music is not credited in iMDB but whoever it is certainly deserves some acclaim.

If you put your preconceptions aside that the title might bring, you might find the movie to be a fascinating look at family dynamics and the effects of absence. I do warn you that the movie is meant for European audiences; the pace is very slow and the movie a little bit on the long side for American audiences who are somewhat attention-challenged for the most part. Still, those willing to give Yves a chance may find unexpected rewards here. We all harbor our own secret hurts; this is a movie that concerns itself about bringing those dark fortunes into the light and that has to be a good thing.

REASONS TO GO: Ricklin does a good job with such an important role.
REASONS TO STAY: The pace is meant for European audiences who tend to be more patient than American ones.
FAMILY VALUES: There is profanity, adult themes and some sexual references.
TRIVIAL PURSUIT: This is the first narrative feature by Haupt who has made documentaries up until now.
BEYOND THE THEATERS: Amazon, Vimeo
CRITICAL MASS: As of 1/6/19: Rotten Tomatoes: No score yet. Metacritic: No score yet.
COMPARISON SHOPPING: The Bad Seed
FINAL RATING: 6.5/10
NEXT: Rust Creek