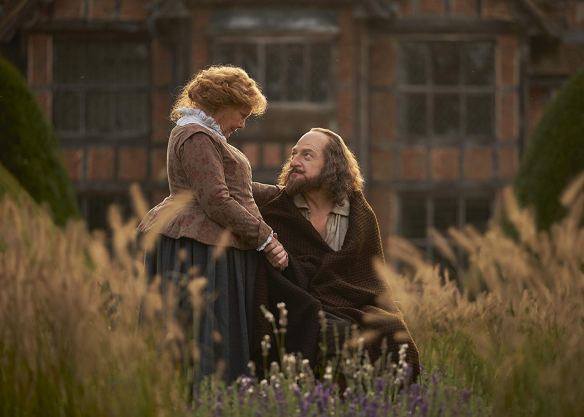 Will Shakespeare and his wife Anne share a tender moment.

William Shakespeare is possibly the most famous writer who ever lived but even given that remarkably little is known about his personal life. What is known for sure is that in 1613, following a performance of Henry VIII in which a prop cannon misfired, setting fire to the Globe Theater and burning it to the ground, William Shakespeare left London for good and returned home to Stratford-Upon-Avon, never to write again. It is also known this was 17 years after his only son Hamnet (Ellis) died tragically at the age of eleven.

=Kenneth Branagh is widely known to be one of the greatest Shakespearean actors of the modern era, having brought the Bard to the screen in such films as Much Ado About Nothing, Henry V, Love’s Labour’s Lost, As You Like It and Hamlet. For someone who so clearly loves the work of Shakespeare, it musts be tantalizing to say the least to speculate about his life. Why did he stop writing in 1613? What was his life like in Stratford after his retirement?

Branagh plays the Bard which must have been both daunting and deliciously illicit (sort of like doing an impression of a favorite teacher) pottering about the garden of his Stratford home where he means to create a memorial garden for his son. The return home has brought him no peace; he continues to mourn for a son he never really knew (Shakespeare spent most of his time in London and rarely visited home) 17 years after the fact. His sharp-tongued wife Anne (Dench), many years his senior (actually merely eight years in reality) has relegated him to the second-best bed in the house, refusing to sleep with a husband who is more a stranger than a spouse. His older daughter Susannah (Wilson) is married to a rigid Puritan physician (Fraser).

His younger daughter Judith (Wilder), Hamnet’s twin, shows nothing but contempt for her father and wishes fervently he had stayed in London. Raised by her mother, she seems as strong-willed and as iron-tongued as Anne. Shakespeare is haunted by the ghost of Hamnet and by his own failings as a father and a husband while coping with the fame that refuses to leave him alone.

The story is largely fiction although the salient facts are there; Shakespeare’s retirement in 1613, the death of his son, the loss of the Globe Theater in a catastrophic fire. The rest is invention by Branagh and writer Ben Elton. Serious Shakespearean scholars will probably raise an eyebrow or two at the creative licenses taken here but for most of us, it’s all good.

In many ways Branagh was born to play Shakespeare and he captures the wit and humanity that the writer displayed in his work. Surely this is the Shakespeare we all imagined he’d be: distracted, unable to cope with the tragedies in his life, largely lost without the outlet of writing. Branagh also makes his Will Shakespeare a product of his times; a bit misogynistic – unable to grasp the concept that the true inheritor of his talents might have been Judith, the distaff twin of Hamnet upon whom he place all his hopes of having a successor – and prone to being a bit self-absorbed. Branagh humanizes the Bard and makes him relatable.

Dench, as always, rises to the occasion, making Anne Hathaway Shakespeare a reflection of herself and the kind of wife you’d figure Shakespeare would have. She holds her own with Branagh – or rather, he with her – and the two are electric whenever appearing as a couple onscreen. Some of the most entertaining scenes in the movie are the two sparring with one another.

Cinematographer Zac Nicholson makes this a very pretty film to watch, from the recreations of Elizabethan England to the lovely bucolic English countryside which continues today to be a charming film locale. Nicholson relies on backlighting to create spectacular images of Shakespeare in Country. It’s a beautiful looking film which is never a bad thing.

There is a melancholic atmosphere here which is at times laid on a bit too thickly; Shakespeare is certainly in mourning for his son but for also the Globe and in many ways, for himself. The humor isn’t especially over-the-top and has a gentle touch (for the most part) although at times the acid tongue of Anne Hathaway gibes rise to some really potent zingers. While the dialogue can get a bit overindulgent at times (and there are an awful lot of Shakespearean references that are going to go over the average audience member’s head) there is nonetheless a charm here that made this one of my favorite films at the recent Florida Film Festival. I’m looking forward to seeing it again at it’s upcoming Enzian run.

REASONS TO SEE: Branagh and Dench deliver wonderful performances. The cinematography is stunning. The humor is nice and gentle. The story is oddly affecting.
REASONS TO AVOID: The dialogue is a bit dense in places.
FAMILY VALUES: The thematic elements are adult, some sexual references and a bit of profanity.
TRIVIAL PURSUIT: Screenwriter Ben Elton was also one of the main writers on the Blackadder series, which frequently spoofed Shakespeare’s plays.
CRITICAL MASS: As of 5/12/19: Rotten Tomatoes: 73% positive reviews: Metacritic: 59/100.
COMPARISON SHOPPING: Shakespeare in Love
FINAL RATING: 9/10
NEXT: Ode to Joy