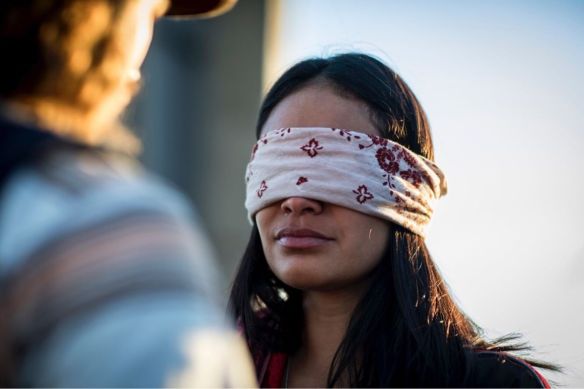 Illegal immigration is a hot button topic these days and while some may chafe at the label “human rights crisis” that is in fact a more-than-adequate description of what’s going on at our southern border. Poverty and violence in Central and South American nations has led to a wave of refugees trying to make it to the United States and what has to be a better life than the one they are faced with.

Nona (Calderon) works in a small Honduran city “painting the dead”; that is, putting make-up on corpses at a local funeral home to make them funeral-ready. She is essentially alone; her father was gunned down on the way home from the local grocery to purchase a bag of chips, her brother knifed by a criminal gang, and her mother fled to America. Nona wants to join her but neither Nona nor her mother can afford the cost of getting her there.

Enter Hecho (McKinney), a bowler-wearing hipster with a free spirit and breezy attitude that belies his broken heart. He’s headed for Mexico – specifically Tijuana – and is willing to take Nona along for the company. She can pay him back for the expenses later. Although Nona is a smart and worldly sort, she finds the charm that Hecho exudes irresistible and agrees to go with him.

At first it seems like a great idea. Hecho seems to be in no particular hurry as they take various buses through the Honduras, Guatemala and into Mexico, sometimes taking boats and on one occasion, a yacht. Sometimes they just hoof it but Hecho seems to have plenty of money to buy food, and occasionally party in bars and discos. The difficult and dangerous journey to the border is portrayed essentially as a stroll in the park. But when Nona reaches the border and Hecho turns her over to a coyote who will get her into the country, the parting of ways hides a dark truth that will shatter Nona’s life.

The movie makes a very jarring turn about two thirds of the way in and it is completely unexpected. I toyed with the idea of revealing what that turn is but decided not to reveal it to give that turn greater impact. Suffice to say it reflects a problem that is all too prevalent in the immigration equation.

The first two thirds of the movie could well be a travelogue with the attractive couple of Nona and Hecho sampling the culture along the way. The cinematography is idyllic and the pace somewhat languid. There is no romantic relationship between Hecho and Nona and little sexual tension so any thoughts of romance through the first part of the movie is best left put on the back-burner.

I don’t have a problem with tonal shifts in films, even ones as completely opposite as the tone of the last half hour is to the first hour. The problem is that the first hour of the movie doesn’t really set up the last 30 minutes adequately; it feels like the filmmakers wanted to give the audience a sense of how Nona must have felt when confronted by her situation which changed radically in a matter of moments. It almost feels like two different films and maybe it is. I think Polish would have benefited by spending more time on the second half of the film and less on the first.

Polish is a veteran director who has an impressively diverse filmography, although none of his films to date have really blown me away. I think this one was meant to but at the end of the day, while it is timely and even borderline essential, it is a disappointing treatment of a subject that deserves better.

REASONS TO SEE: The chemistry between the leads is strong.
REASONS TO AVOID: The abrupt shift in narrative is jarring and not adequately set up.
FAMILY VALUES: There is some strong sexual situations, rape, profanity, violence and drug use.
TRIVIAL PURSUIT: Kate Bosworth, who is also a producer on the film, is married to Michael Polish; Polish also frequently collaborates with his brother Mark although Mark isn’t involved with this specific film.
BEYOND THE THEATERS: Amazon, Fandango Now, Google Play, Vudu
CRITICAL MASS: As of 5/22/19: Rotten Tomatoes:60% positive reviews: Metacritic: No score yet.
COMPARISON SHOPPING: Trafficked
FINAL RATING: 6.5/10
NEXT: Echo in the Canyon