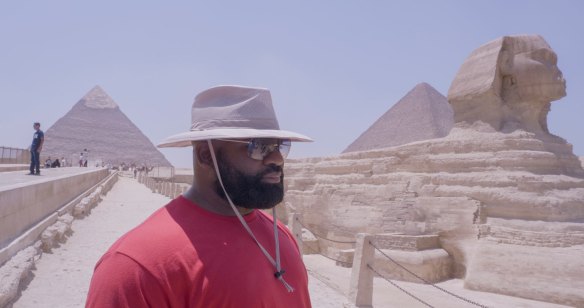 One great stone face and another.

We live in a deeply divided country that has in many ways become hard right and hard left. There is a segment of our society which was deeply affected by 9/11 and continues to bear the scars of that terrible day even now. Their belief about Muslims, spurred by right-leaning news sources, is that most of the Muslim population of the rest of the world are largely terrorists and those who aren’t are terrorist sympathizers. They believe in President Trump’s agenda of excluding immigration from Muslim countries and maybe, to a certain extent, of deporting Muslims living here back to the Middle East.

Tarek Mounib, a Canadian entrepreneur of Egyptian descent, found himself very disturbed by this attitude. While working in Switzerland, he had an epiphany; why not take some Americans who have this mindset to Egypt, have them hang out with real Egyptians and see if it changes their world view. He thought if he paid for all expenses for such a trip, that he could maybe get a few people to go.

At first, he went directly to what he thought would be the motherlode; a Trump rally in Louisville, Kentucky. There he met Brian, an ex-Marine with a yen for travel who agreed to go for the experience. Two of his friends, Jason and Jenna, both evangelical Christians, also agreed to go – in Jason’s case, hoping he could use the opportunity to make a few Egyptians see the light. Mounib also got Mark, an African-American police officer working at the rally to agree to go although of all those who ended up taking the trip he seemed to be the least prejudiced of them all.

Other means of recruiting others didn’t work so well. It wasn’t until Mounib appeared on a nationally syndicated radio talk show that he finalized his line-up; single mom Katie who had deep-seeded issues with the way women are treated in the Islamic faith, and elderly couple Eileen and Terry, both of whom had become xenophobic after 9/11. Eileen, who confessed she had marched in the Sixties for racial equality, had realized that she was a racist and hated herself for it but couldn’t find a way out of the vicious circle, especially when their only son Mark took a job in Saudi Arabia.

Mounib paired the travelers with Egyptians who would spend the day with him and in addition to taking them to the usual tourist sights like the Cairo Museum and the Pyramids, also had meals with them and introduced them to friends and family. Most of them are well-paired; for example, Jenna and Jason are paired with a large Egyptian family; Mark with a jovial overweight Egyptian who is more pro-Trump than most of the Americans; Eileen and Terry are paired with a cinematographer and Kate with a female activist. Sadly, we don’t get to know the Egyptians nearly as well as the Americans. I think that might have helped the movie make its point more powerfully.

There are some awkward moments; the group including their Egyptian hosts are taken to a Zar healing ritual, both the evangelicals and their host family are greatly disturbed at what they see on the Muslim side as a perversion of Islam and on the Evangelical side as paganism. An odd place to find common ground, but these are odd times.

This is the kind of movie that we all need to see but especially those who feel, as many of the travelers initially do, that the world is an us versus them type of place and that there is an unconquerable divide between the Muslim world and ours. Not everyone is transformed by this experience who goes – Jason ends up trying to convert Mounib which I found a bit amusing – but there are at least some interesting discussions. Jenna ends up admitting that if heaven turned out to be a place without Christ, she would rather go to Hell. That’s pretty powerful when you think about the ramifications of it.

There is a coda as the filmmakers follow some of the participants well after the trip is over. Two of the participants were truly transformed by their experience (and you can probably guess who just by reading this review) and when a momentous event occurs, we truly see how completely that person had changed. It’s the kind of tug on the heartstrings moment that will leave even the most jaded moviegoer a bit misty-eyed.

Too often we emphasize the differences between cultures while ignoring the similarities. At the end of the day we are all just people, making the best of things in a world that is impossibly hard to navigate at times. We are all just fellow travelers on the same road and maybe when we boil it down that way, then little details like how we worship God or where we live or what we eat or the color of our skin ceases to matter much. The quickest way to heaven’s gates is through an open heart.

REASONS TO SEE: A strong and vital project with some truly powerful moments. There’s an unexpected coda. Transformative in many ways. Love that it emphasizes the similarities of cultures rather than the differences.
REASONS TO AVOID: Doesn’t spend enough time letting us get to know the Egyptians.
FAMILY VALUES: There’s a bit of profanity.
TRIVIAL PURSUIT: The movie was timed to coincide with Cunningham’s centennial.
CRITICAL MASS: As of 5/26/19: Rotten Tomatoes: No score yet: Metacritic: No score yet.
COMPARISON SHOPPING: American History X
FINAL RATING: 9/10
NEXT: For the Birds