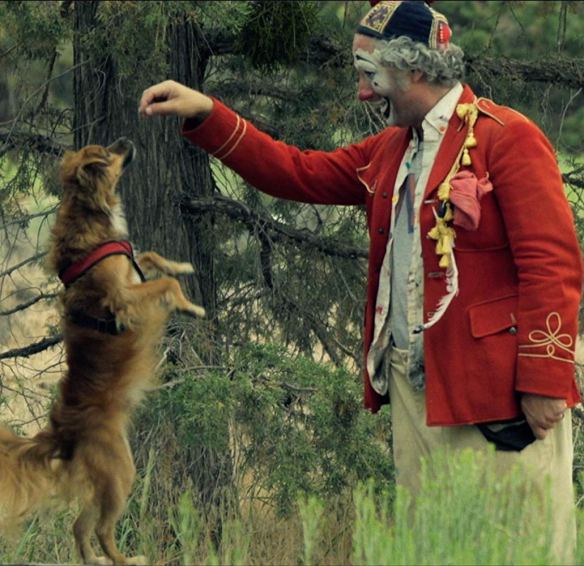 Two-thirds of the title characters.

When you are a certain age, the world is full of possibilities. The impossible is possible because you haven’t yet learned about boundaries and limits. Magic is real because you haven’t learned differently. Experience teaches us that there are things that are not real but until then, everything could be.

Adrien (Lyon) is a ten-year-old boy who is at that age of possibility, but he’s already received one major body blow; his father passed away. The two had been close and his mom (Del Vecchio) worries about him. One day while wandering on the beach by Santa Monica Pier he meets a sad clown walking his dog. The clown doesn’t speak per se, other than to make a series of gibberish noises but he manages to communicate his sadness to Adrien. It’s an emotion Adrien understands all too well and he helps the clown turn his frown upside down without a sound. In return, the clown performs a magic trick for Adrien, making a butterfly appear in his hand.

Adrien is entranced and begins to hang out with the clown regularly. Of course his mom is wary but the clown seems harmless enough and when Adrien asks if his new friend can join them on a camping trip for his birthday, mom says yes. They are joined by his Uncle Steven (Johnston) and Aunt Michelle (Christopher). Steven is a psychologist who is concerned about the clown and Adrien’s seeming belief that magic is real (the clown conjures butterflies that nobody else but Adrien can see, and when Uncle Steven sends Adrien and his new friend on a snipe hunt, Adrien actually captures a snipe although – again – only Adrien and the clown can see it.

When the dog runs after a squirrel into the woods and Adrien chases after it and gets lost, pandemonium ensues. Adrien is in a desperate situation with dark coming on and bears wandering around nearby. It will take some real magic to get Adrien back home safely.

Nick Lyon is best known for directing direct-to-cable movies for The Asylum, a production group that specializes in genre B-movies, some of which are fairly violent. This is as far from that kind of film as you can get; there is definitely a family tone here and the movie is suitable for all ages in that regard.

What I really like about the movie is the mythic feel to it; not in a Disney-esque sense but in the kind of children’s books that I myself read as a child. The clown is not the scary kind of clown (except in a couple of scenes which adults might find creepy) for the most part unless you have a fear of clowns which isn’t uncommon.

The problem here is mainly with the performances. It sounds like everyone is reading their lines rather than saying them. It doesn’t help that some of the dialogue is stiff and unnatural. That really hinders the movie from displaying any charm which a movie like this desperately needs to be successful.

I wanted to like the movie more than I did. It’s not that it’s a bad movie; there’s a lot going for it here, particularly in the concept. I liked Dell as the clown; at least he has energy. So does the younger Lyon as Adrien but the rest of the adult cast is just flat. It’s like community theater on-screen and while that’s a hoot when it’s your own community, it gets to be like watching someone else’s home movies after awhile.

REASONS TO SEE: Contains an interesting mythic quality.
REASONS TO AVOID: Weak Performances throughout the cast.
FAMILY VALUES: There is some mild peril.
TRIVIAL PURSUIT: Adrien is the son of the director and the inspiration for the film.
CRITICAL MASS: As of 12/9/19: Rotten Tomatoes: No score yet: Metacritic: No score yet.
COMPARISON SHOPPING: Extremely Loud and Incredibly Close
FINAL RATING: 5/10
NEXT: Knives and Skin