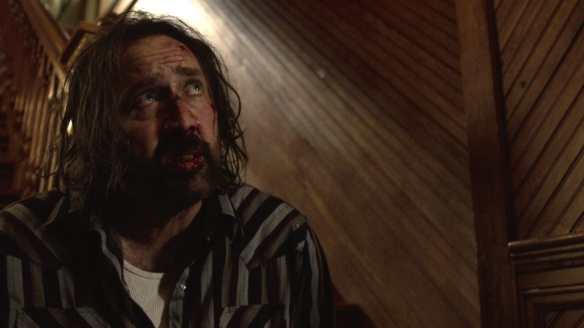 Nicolas Cage, after reading the script to his next movie.

Nobody freaks out in the movies better than Nicolas Cage and I mean that as a compliment. Sure, Conan O’Brien once suggested the Department of Homeland Security use clips from his films to demarcate the various terrorist threat levels (not a bad idea, actually) but nonetheless Cage knows how to lose his shit onscreen better than anybody.

In this film he plays Walter, a Vietnam vet slowly drinking himself to death in a small Southern town. It’s one of those delta locales where the steam seems to rise from the skin and even the flies find it too humid to buzz. Campanelli does a good job of establishing the locale (you can almost smell the sweat) although his actors for the most part overdo the Southern accent.

Walter hires a fellow vet (albeit much younger) named Buddy (Benward) to fix a section of picket fence just as a hurricane is arriving in town. As Buddy’s long-suffering wife Fancy (Strickland) observes, it takes some kind of idiot to repair a fence before a hurricane but I suppose it makes sense to the bourbon-soused.

Buddy has been chronically unemployed, putting massive strain on his relationship with his wife Lisa (Palmer) who is coping not only with Buddy’s lack of income but with the health problems of their infant daughter as well. It goes without saying that he’s happy to take any sort of work, even if the job makes him feel uneasy. Much of that uneasiness stems from Fancy (Strickland), the oversexed wife of Walter.  Her husband is, shall we say, less than a stellar performer in the bedroom and she’s plenty frustrated over it.

Of course, Buddy gets caught in the hurricane and is forced to hunker down with Walter and Fancy. And of course, the tension between the three starts to edge over the boiling point. And of course, Walter and Fancy are hiding a dirty secret in that basement which has been locked in such a way as to guarantee curiosity if not outright suspicion.

There are elements of both Southern Gothic and film noir, two genres that usually compliment each other well and to be fair to the filmmakers they manage to strike a fine balance here. However, there is also a lot of disquieting elements to the film. For starters, the actors chew the scenery with so much gusto one would question whether or not they had just been liberated from a prison camp.

Cage is usually the actor I look to when it comes to commanding attention, but he’s much more low-key than usual here which I suppose has to do with the southern demeanor. Naturally, it came as a bit of a surprise that it was Strickland who really made an impression on me, in this case as a Southern femme fatale. She is as seductive as a siren, as acerbic as a pundit and as merciless as a snake.

The script kind of falls apart in the last third. The clichés and tropes begin to pile up and all plausibility goes right out the window. The saving grace here is the entertainment factor; if you don’t think about this one too much you might find yourself enjoying it in spite of itself.

This is the sixth film starring Cage to be released in 2019 (with at least four more scheduled for 2020), almost all of them action thrillers and none of them released wide. Not a great standard for an Oscar-winning actor but hey, you take work where you can get it.