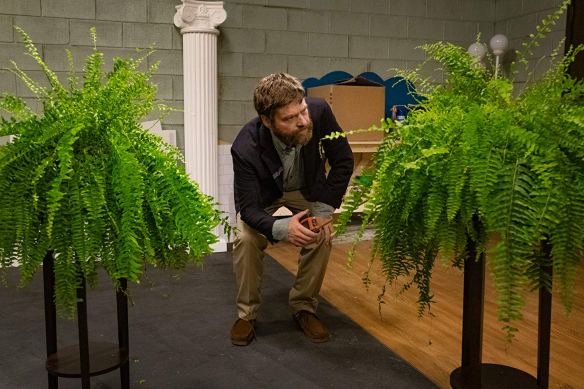 I will admit that the kind of humor found on podcasts, YouTube videos and generally anything on the Internet leaves me pretty cool. I suppose I’m too old, not hip enough or just plain too curmudgeonly for the kind of wry humor that seems to dominate those forms these days, with the almost obsessive pop culture references. In any case, while I generally like Galifianakis and his short interview sequences on the Funny or Die website, I was hesitant about watching a full-length feature film about it.

Anyone who has seen the interview segments that Galifianakis conducts in the web series knows that they are deadpan and viciously funny, and that continues here. Asking McConaughey “Of all the things you could win an Oscar for, how surprised are you that you won one for acting?” or Keanu Reeves following up on his assertion that he researches for his film roles, “Have you ever thought of researching a character who has taken acting lessons.”

The thing is, these zingers are better on paper than they are live where they just come off as kind of dickish. Also, the surrounding storyline – Zach has to film ten Between Two Ferns episodes in two weeks if he is going to get the late-night talk show host position he so dearly covets. The road trip aspect of the movie is decidedly unfunny. Lapkus does commendable work as Zach’s long-suffering assistant while Gaul and Linayao are solid as his sound and camera operators. The parade of A-list celebrities turn out to be good sports about the often really nasty questions Galifianakis asks them. A closing credits blooper reel shows, however, that they are definitely in on the joke – most of the time.

Some will find this deliciously funny; others will find it needlessly cruel. Like I said, maybe I’m not exactly the target audience but I would trend more towards the latter group although there are some really hilarious moments. Just not enough of them to make me recommend this one.

REASONS TO SEE: Lapkus does a solid job.
REASONS TO AVOID: The droll humor is really hit or miss – mostly miss.
FAMILY VALUES: There is some profanity and sexual situations.
TRIVIAL PURSUIT: This marks the second time Hamm has been an interview subject on Between Two Ferns.
BEYOND THE THEATERS: Netflix
CRITICAL MASS: As of 1/5/20: Rotten Tomatoes: 75% positive reviews: Metacritic: 59/100.
COMPARISON SHOPPING: Borat
FINAL RATING: 5/10
NEXT: Kin