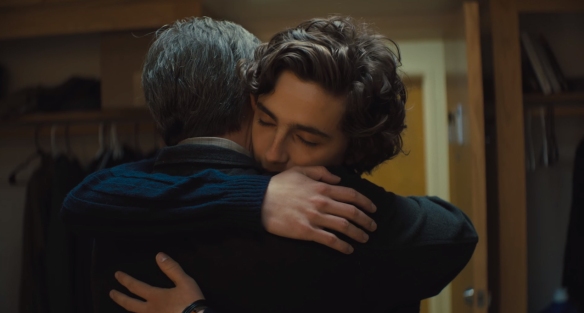 A father and child reunion.

Drug addiction remains a problem for humankind; as a species we seem driven to do things we know are bad for us because they feel good. Nic Sheff (Chalamet) is a white, upper middle-class teen who seems to have everything; a loving family, particularly his father and two half-siblings he adores. He’s super-bright, having been accepted at every college he has applied to. His future looks exceedingly bright.

But for whatever reason Nic turns to drugs; what drives him there is never really explored in the film. Perhaps it was the divorce of his dad David (Carrell) – a respected journalist who was one of the last to interview John Lennon before his untimely death – from his mom (Ryan) who lives in L.A. David is remarried to Karen (Tierney) who struggles to understand her stepson.

Nic’s addiction takes the family on a roller coaster ride of disappearances, binge drug use, periods of sobriety, then repeating the cycle again. David grows more desperate, trying to figure out what is driving his son; the two fight a lot but David is fiercely protective of his son, refusing to give up on him. This puts strain on his marriage as his wife begins to feel that he’s neglecting his current family for his ailing son. At last, with Nic fast approaching rock bottom, David is forced to make a terrible choice.

The movie is based on two books – one written by David, the other by Nic – and uses both to get the viewpoints of both characters. Van Groeningen seems pretty even-handed here; he doesn’t make amy judgements but presents the behaviors for the audience to come to their own conclusions. It’s hard at times not to get angry with Nic, who at times seems to blame everyone but himself for his predicament. There is a wrenching scene in a diner when Nic, who is showing signs of relapsing, asks his father for money so he can move to New York. David begs him to stay in Northern California but Nic doesn’t like the vibe. Things escalate and it ends badly for both men. There is also a scene very late in the movie where David, following a phone call from Nic, finally accepts that he can’t help his son. After giving Nic some tough love, David breaks down and slowly starts taking the pictures of his son down from his office. It’s a heart-wrenching moment that families of addicts may well identify with.

I can’t say enough about the performances of both Carrell and Chalamet. Carrell, like Robin Williams and Tom Hanks before him, has morphed from a zany comic actor to an outstanding dramatic actor. I think he’s a role or two away from being a regular part of the Oscar conversation. As for Chalamet, after an unforgettable performance in Call Me By Your Name, he’s established himself as one of the brightest young actors in Hollywood. He may well be the best young actor since Pacino.

The movie also benefits by one of the most fascinating and most diverse soundtracks I’ve ever seen. It has everything from opera to punk to ambient pop to jazz to classic rock to folk to easy listening. On the negative side, the movie from time to time (albeit rarely) descends into maudlin territory. Van Groeningen also likes to employ flashbacks to help explain the actions going on.

This can be very hard to watch at times; nearly unbearable. There are also some moments that are incredibly tender. Father-son relationships often get the shaft when it comes to Hollywood; dads are often portrayed as lovable but befuddled buffoons who have no clue what’s going on. This is a very real and very touching portrayal of a close father-son relationship that is put to the most torturous test imaginable.

REASONS TO SEE: Compelling performances by Carrell and Chalamet. A fascinating and diverse soundtrack enhances the movie.
REASONS TO AVOID: The flashbacks are sometimes intrusive and hard to follow.
FAMILY VALUES: There is some fairly straightforward drug content, plenty of profanity and some sexual material.
TRIVIAL PURSUIT: Royo, who plays Nic’s AA sponsor, also played a drug addict himself on The wire.
BEYOND THE THEATERS: Amazon,
CRITICAL MASS: As of 2/15/20: Rotten Tomatoes: 69% positive reviews, Metacritic: 62/100.
COMPARISON SHOPPING: Ben is Back
FINAL RATING: 7/10
NEXT: Camp Cold Brook