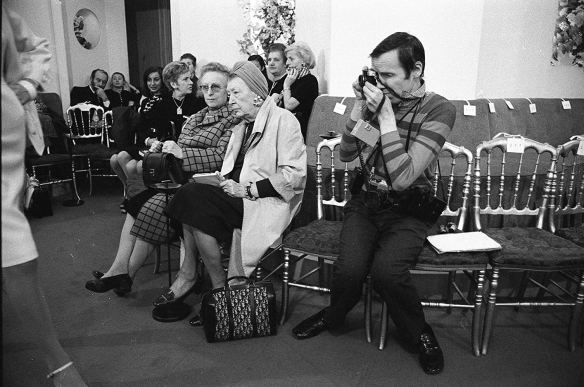 He had an eye for ladies’ fashion and for life going on around him.

Bill Cunningham was a beloved figure in New York; his two columns for the New York Times begun in 1967 were candid shots of mainly women on the streets of New York and out at fabulous parties became something of a visual history of fashion in the Big Apple for nearly 50 years. He mainly hung out at 57th Street and 5th Avenue, a corner which New Yorkers have petitioned to re-designate as “Bill Cunningham Corner,” a familiar presence on his bicycle and blue moleskin jacket.

The movie essentially revolves around a 1994 interview Bozek conducted with the photographer that was only supposed to last ten minutes but went on until the tape ran out. Although there was a previous documentary on his life, this one – which fittingly enough debuted at the New York Film Festival in 2018 – has more of the man’s voice in it, faint Boston accent and all.

We get a pretty good overview of his life, from his strict conservative Catholic upbringing in Boston, to his time working as an advertising minion at the high-end department store Bonwit Teller in New York, to his obsession with ladies hats leading to a career as a milliner (hatmaker) which continued clandestinely while he was stationed in France for the Army. We see his time working at Chez Ninon, a New York fashion house that catered to the wealthy, to his introduction to journalism at Women’s Wear Daily, to the serendipitous photograph of Greta Garbo – he didn’t know who it was he was taking a picture of, only that he admired the way she wore her nutria coat that led to his long association with the Times.

Cunningham is a marvelous storyteller and a charming, boyish presence on whom Bozek wisely keeps his focus. Former Sex and the City star Sarah Jessica Parker is an appropriate narrator, although I wish the narration had filled in the blanks a little bit more; for example, we’re never told how he ended up in the Army and when was he a part of it. We also hear nothing of the autobiography that was posthumously published, nor is any material referred to from there.

However, we are treated to literally thousands of still images that were not only taken by Cunningham but also illustrated the various eras of fashion that he lived through. We get the joy that Cunningham took from his work – although he considered himself a fashion historian rather than a photographer and constantly downplayed his keen eye – but also there are moments that humanize him, as when he breaks down considering the toll AIDS took on those around him, particularly neighbor Carlos Garcia who was the subject of a documentary earlier this year himself and lived with Cunningham in the remarkable Carnegie Studio apartments above the legendary facility which are sadly scheduled for demolition to build offices and studios for the performers there. That’s a shame, considering that luminaries like Norman Mailer, Leonard Bernstein and Marlon Brando lived and worked there.

In any case, this is a joyful documentary that is a tribute to a life well-lived. Most New Yorkers, particularly those in or with an interest in the fashion industry, adored Cunningham; Anna Wintour, the notoriously catty editor of Vogue once quipped “We all get dressed up for Bill,” and there is a lot of truth in that. It was not unknown for the women of New York, eager to get their picture in the Times, to put on something fabulous and make their way to his corner. It was a kind of immortality, after all.

In that sense, Cunningham – who passed away following a stroke in 2016 – will outlive us all. His amazing collection of photos which he stored in his tiny studio apartment somewhat haphazardly, will continue to shine a light on how we lived and how we dressed for what future generations remain. There is nothing wrong with that epitaph.

REASONS TO SEE: Cunningham is a bubbly, effusive and self-effacing raconteur who makes for a charming subject.
REASONS TO AVOID: Fails to fill in some of the blanks.
FAMILY VALUES: This is suitable for all family members.
TRIVIAL PURSUIT: Although Cunningham was the subject for a previous documentary of his life in 2010 and attended the premiere, he remained outside while the film screened, taking pictures and never saw the film.
CRITICAL MASS: As of 2/22/20: Rotten Tomatoes: 72% positive reviews: Metacritic: 68/100.
COMPARISON SHOPPING:  Bill Cunningham: New York
FINAL RATING: 6/10
NEXT: Portrait of a Lady on Fire