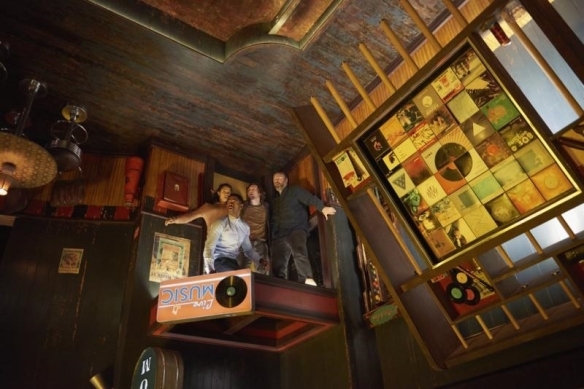 Did someone say “Poseidon Adventure”?

When a movie is dumped into a January release date, it could either be an Oscar-qualifying holdover looking to make a wide release (good), or a movie that the studio’s pretty sure is going to tank (bad). When it’s a horror movie, it generally means the studio thinks it can clean up against generally weak competition of Christmas holdovers and January bargain bin cinema.

Escape Room actually isn’t all that bad; it capitalizes on the escape room fad which was pretty much inevitable – Hollywood likes to capitalize on every fad. Escape rooms, for those not in the know, are group exercises in which a group is locked in a room and must solve clues scattered about the room to unlock the doors and escape. Normally, there’s a time limit. Normally, the room doesn’t kill anybody.

But this being a January-released horror movie, you know that’s not going to be the case here. The six contestants, lured by the prospect of a $10,000 payday if they solve the puzzle and escape, are an introverted math whiz (Russell), an alcoholic loser (Miller), a cocky businessman (Ellis), a PTSD-afflicted veteran (Woll), a truck driver (Labine) and a puzzle nerd (Dodani) who may as well have been called “Mr. Exposition.”

The cast is serviceable and at least commit to playing parts which are largely one-dimensional. The rooms themselves are lavish and fiendish; try and check any sort of logic at the door and you’ll be okay. For the most part this is mildly entertaining if you like this sort of thing, but hardcore horror fans are going to bemoan the lack of gore (another studio going for the PG-13 crowd) while thriller fans might find this too simplistic. It did well enough to generate a sequel whose release has been held up by the COVID-19 outbreak.

REASONS TO SEE: Reasonably entertaining.
REASONS TO AVOID: Very much “been there, done that.”
FAMILY VALUES: There is lots of violence and profanity, perilous action, some sexually suggestive material and a few grisly images.
TRIVIAL PURSUIT: This is the second time that Robitel has directed the first nationwide release of a new year (he previously did in 2018 with Insidious: The Last Key).
BEYOND THE THEATERS: Amazon, AMC On Demand, AppleTV, Fandango Now, Google Play, Microsoft, Redbox, Starz, Vudu, YouTube
CRITICAL MASS: As of 5/27/20: Rotten Tomatoes: 51% positive reviews, Metacritic: 48/100
COMPARISON SHOPPING: Saw
FINAL RATING: 6/10
NEXT: The Vanishing