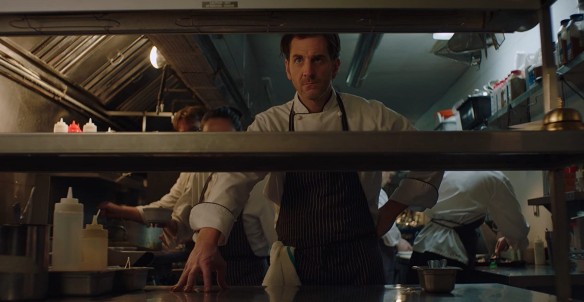 Cut off at the pass.

In recent years, chefs have gone from being virtually unknown to becoming rock stars in their own right. A celebrity chef can pretty much write their own ticket, able to command the attention of foodies the world over who will walk across hot coals to get a table at their restaurant. For this, we sometimes excuse behavior we wouldn’t accept in our own workplace. If Gordon Ramsey were my boss, I’d be sitting him down in HR with a lawyer handy after one of his tirades.

Danny (Abrams) has gone from being the darling of hipster foodies, the hot young chef to being a dinosaur in his own bistro. His restaurant is hemorrhaging money and his past due bills are piling up; even though his restaurant is packed night after night, he is drowning in debt. The only life preserver on the horizon is his school chum Mark (Esmer) who has agreed to come to his restaurant for a meal with a group of potential investors who might prove to be the solution to his cash flow problems. He needs to wow the table or face the closure of a business he has spent ten years building.

The film chronicles the day of that dinner. Danny is already in hot water with Chloe (Chorostecki), his house manager and sometime lover who he stood up the night previous. He is perturbed because the new hot food truck with the new hip not chef (Tome) is parked cross the street from his eatery. His sommelier (Antonio) reports that none of his wine providers will extend any credit to him any longer. His landlord (Kennedy) has had it up to here with missed rental payments and bounced checks; he has to the end of the month to get caught up or Danny will be evicted.

To make matters worse, a supercilious food blogger (Collins) informs Danny that his talented sous chef Keith (McKnight) is jumping ship for the chance to become an executive chef in his own restaurant. And Danny has forgotten that his ex-wife (Bartczak) is bringing his son (Black) over because it is his day to watch him. Along the way, Danny will rant, scream, and berate his put-upon staff while pushing away the one person who seems to believe in him at all. As the night progresses, Danny seems to be falling apart. Can he pull it together to save his restaurant?

First-time feature director Zigelstein paints a realistic portrait of life in an upscale bistro, and of the challenges (that are sometimes insurmountable) that independent restaurants face. It is no secret that restaurants fail at a staggering rate; it is one of the toughest businesses to succeed at.

Abrams does strong work as Danny, a man whose own hubris is his own worst enemy. Danny believes that he is still the biggest and brightest star in Toronto; that belief has become increasingly delusional and everyone knows it except Danny. He’s not a pleasant person to be around and he’s certainly not a pleasant person to work for. He’s the stereotype of an asshole chef, the kind we see on TV and in the movies and whose behavior may be amusing from a distance, but if you are forced to deal with it day after day would no doubt provoke PTSD in a major way. Danny’s tirades and tantrums eventually grow wearying and by the time the movie comes to an end you may not give a ratatouille whether Danny saves his bistro or not.

That aside, the movie feels pretty authentic to me, but as I’ve never worked in a professional kitchen myself you might want to take that with a grain of salt. This is definitely not a film for Vegans (there’s a scene that is critical to the plot that involves the butchering of a hog, and it appears they use an actual hog carcass or at least a realistic facsimile of same) nor is it a film for those whose idea of a high class meal is the daily special at Appleby’s. Nonetheless, there’s enough here to merit a look-see and as the rental fee is extremely reasonable ($3.99 at most streaming services), you really can’t go wrong.

REASONS TO SEE: A realistic look at some of the obstacles restaurants face.
REASONS TO AVOID: There comes a point where the tantrums become tiresome.
FAMILY VALUES: There is all kinds of profanity and some brief violence. There are also images of meat being butchered that may upset vegans or those sensitive to such scenes.
TRIVIAL PURSUIT: Both Abrams and Chorostecki had supporting roles on the excellent but lamentably canceled Hannibal.
BEYOND THE THEATERS: Amazon, Fandango Now, Google Play, Microsoft, Vudu, YouTube
CRITICAL MASS: As of 8/8/20: Rotten Tomatoes: 70% positive reviews: Metacritic: No score yet
COMPARISON SHOPPING: Chef
FINAL RATING: 6.5/10
NEXT: Made in Italy

We Americans often romanticize Africa as a place of glorious vistas and wonderful animals. Or, we demonize it as a place of corrupt governments and tribal genocide. Both of those viewpoints are incomplete; Africa is so much more. It is modern cities, but it is also small villages of subsistence farmers that are literally like living in another century.

This true story is based on the life of William Kamkwamba (Simba), a young boy with a knack for mechanical things who lives in a rural village in Malawi in abject poverty. His father Trywell (Ejiofor) faces drought and flooding, brought on when a neighboring farm sells to a tobacco company who promptly cut down all the trees whose roots held back flooding in the village with predictable results. The family was already living on the edge; now with most of their food supply destroyed and with no income from selling what they didn’t consume, things get desperate – William’s intelligent sister (Banda) is forced to withdraw from college and face a life of marriage and child-rearing, a life her mom (Maiga) knew would be a waste of her daughter’s potential. They also can’t afford the tuition at William’s school; however, he arranges with a teacher – blackmails, more like – to get access to the school library.

But William has an idea – a windmill to draw water from the village well to irrigate their farms. William has little to work with and his father, beaten down by all the obstacles he has failed to overcome, has little confidence that William’s idea will work and is unwilling to give up the bicycle chain that is crucial to the success of the windmill. The stakes couldn’t be higher for William and his family; could his knowledge of science and engineering overcome his father’s prejudices?

This is the first feature as a writer and director for Ejiofor and it’s a pretty good one. He captures all the tribulations faced by tribal villages in Africa, from political turmoil to environmental challenges to their own superstitions and traditions. That the real William Kamkwamba was able to overcome these things as a middle school-aged boy is nothing short of miraculous (today he is in his early 30s as this is written and a college graduate who has appeared on The Daily Show as well as given TED talks). Ejiofor takes great care to develop the story, but at times is a bit too workmanlike; a good director knows the shorthand needed to keep their film from bogging down. Ejiofor will acquire this skill through practice, no doubt. There’s a lot good about the movie, and it is worth checking out if for no other reason for an educational standpoint but be aware that the film has some noticeable flaws.

REASONS TO SEE: Captures the honesty of African village life.
REASONS TO AVOID: Although the payoff is inspiring, the lead-up is frustratingly over-developed.
FAMILY VALUES: There are some thematic concerns regarding poverty and starvation, but otherwise perfectly suitable for the entire family.
TRIVIAL PURSUIT: Ejiofor filmed on location in Malawi; as he did not speak the native Chichewa language, he had to learn to speak it for his character.
BEYOND THE THEATER: Netflix
CRITICAL MASS: As of 8/7/20: Rotten Tomatoes: 86% positive reviews. Metacritic: 68/100.
COMPARISON SHOPPING: William and the Windmill
FINAL RATING: 6.5/10
NEXT: Nose to Tail