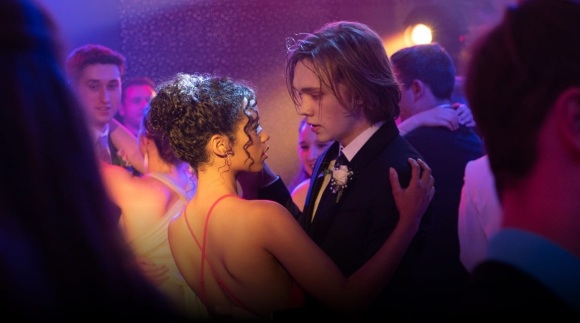 There was a time when made-for-TV movies tended to feature a “disease of the week.” That trend has finally made it to Young Adult novels and the movies based on them.

Here the disease is treatment-resistant schizophrenia. It’s the sort that manifests itself in sounds nobody else can hear and sights nobody else can see – visual and auditory hallucinations. The condition is admittedly fairly rare, but as it is a fairly dramatic mental disease, makes for good fictional fodder by author Julia Walton, adapted here by screenwriter Nick Naveda.

The afflicted party is Adam (Plummer), a high school senior with aspirations towards culinary school. For Adam, the hallucinations take the shape of three humans – the oily Joaquin (Bostick) who represents his libido, the free-spirited Earth mama Rebecca (Robb) who represents his good intentions, the burly bodyguard (Sebastian) who represents his fear, and a swirling black cloud that represents the chaos inside him.

He has successfully hidden his condition from friends and school administrators until a breakdown in a chemistry class leads to a horrific accident. Adam is summarily expelled as a danger to other students, and eventually ends up in a strict Catholic school, whose principal Sister Catherine (Grant) informs Charlie and his desperate mom (Parker) and her new boyfriend Paul (Goggins) that the condition for acceptance into the school is that Adam stay on his new drug treatment, and keep the school apprised of his progress in therapy sessions (in a nifty twist, Plummer plays the therapy sessions to the camera, putting the audience in the role of psychiatrist – well, at least we critics had pen and notepad handy to further reinforce the illusion).

Adam aims to lay low and keep his head down until graduation so that he can achieve his dreams, but he is having issues with his math class. Enter Maya (Russell), the class valedictorian who has some hidden issues of her own, who agrees to tutor Adam for a princely sum. Teen hormones being what they are, Adam soon falls for the fetching Maya who in turn begins to develop some affections for the good-hearted Adam.

But the meds that Adam is on are affecting his taste buds, and a budding chef can’t have that, so he ditches the meds which is the kind of decision you’d expect a teen to make – with predictable results. With Adam teetering on the edge of losing everything, can he keep it together long enough to get through to graduation?

The movie plays it safe on most subjects, preferring feel-good moments to gritty realism with some exceptions (as when Adam encounters a clearly potential older version of himself on a bus, talking to himself). Throw in the usual teen movie clichés – the feeling of being an outsider, the different-is-okay message that goes against the teen instinct for conformity, the awkward attempts at romantic connection, the prom disaster, and the graduation speech that Solves Everything. There are the straight-arrow adults who Don’t Understand, and the unexpectedly hip adult mentor/role model – in this case, Andy Garcia as Father Patrick, a combination of Sigmund Freud, Yoda and Father O’Malley of The Bells of St. Mary’s.

The movie is largely saved by an attractive cast. Plummer and Russell are two of the better actors in the teen movie genre, and they not only deliver solid performances separately, they also have great chemistry together. Parker is terrific as the mama bear who fiercely defends her cub, even against himself, and Goggins is particularly wonderful in a small but important role as the stepdad with whom Adam has a contentious relationship. It is also nice (and fitting) to see Robb and Bostick, both teen movie mainstays not long ago but who have moved on to more adult roles.

One of my issues with the film is that it uses Adam’s mental disease as almost a gimmick; yes, there are those who suffer through these sorts of hallucinations but I would have liked to see a more common form of schizophrenia that more kids suffer from and that they might relate to better. It’s a very difficult subject to tackle, mental illness is, and I’m not sure there’s a good way to do so without feeling like exploitation.

This is one of the first films back in theaters after the major theater chains have reopened, which will work in the film’s bottom line favor. Likely it would have been lost in the late summer shuffle of blockbusters and back-to-school releases. Currently, it is only available in theaters so for those in places that have not allowed theaters to reopen, or for those who are not comfortable with going out to theaters quite yet, you’ll have to wait a bit to catch this one at home.