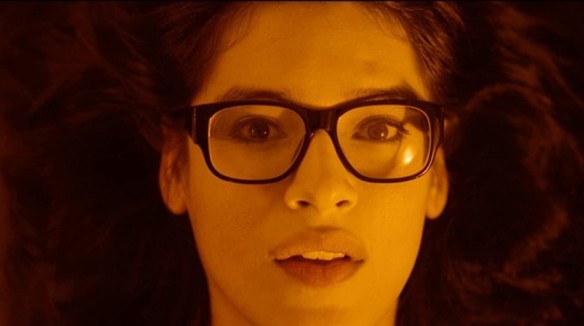 Tina looks out at a world that isn’t kind to trans women.

Some of the most vulnerable members of our society are trans women of color (see Trivial Pursuit below) as well as undocumented immigrants. Both are subject to discrimination and sometimes, even violence.

Tina (Guevara) is transitioning woman who is in the early stages of the process. She lives with her arbuela (grandmother), Elaina (Cruz), in New York City. Tina supports them driving an unlicensed cab. Her grandmother is having a hard time coming to terms with her grandchild’s journey, often referring to her as Antonio, her birth name, but Tina seems to accept that her grandmother is set in her ways; besides, there is undeniably much love between the two of them. It literally is them against the world.

Tina does have a support system of trans friends, particularly Carol (Williams) who is outspoken, particularly when one of their group is brutally beaten up by cops. As Carol shepherds Tina through the process of interviews with an older white doctor (Asner) who Tina doesn’t quite trust enough to open up to, she also infuses Tina with her activism.

A good thing too, because Tina’s long-term boyfriend (Kruz), a Wall Street jerk, is mainly there for the sex and is somewhat ashamed of Tina or more properly, ashamed of his own desires. Tina is also unknowingly being stalked by a bodega clerk (Abdo) who has issues of his own, which inevitably comes to a head.

The film definitely has its heart in the right place as it looks realistically and unflinchingly at the issues besetting both trans women and undocumented immigrants, from the uncertainty about getting insurance and employment, to the ever-present specter of violence; there is a segment when Tina is selling her car that drips with menace. It isn’t that the buyer is overtly aggressive, it’s just the potential for violence seems very close to the surface. These sorts of things are what trans gender women live with daily, and the movie is at its best when it puts its emphasis on these.

I also give the film kudos for casting trans actors in trans roles; it is refreshing that a low-budget indie film is able to do that when much larger Hollywood productions seem uninterested in doing so. Perhaps the AMPAS inclusion guidelines will change that, something I wholeheartedly endorse.

But with inexperienced actors comes another set of problems. Guevara is a very expressive and passionate actress, but her line readings can be stiff and the timing a little off. This is mostly an inexperience thing and I do believe that as she gets more comfortable in front of the camera, she’ll start loosening up somewhat but for now, it is noticeable.

The climax is quite moving, and I loved the relationship between Tina and Elaina; Miriam Cruz does a wonderful job portraying the kind of Latin grandmother I’m very familiar with. The characters are very realistic, although I think that the character of Chris was sadly underdeveloped, considering the part he has to play in the film. Another review I read suggested that Chris shouldn’t have been developed at all but rather just show up at the end, an idea I found intriguing. It certainly would have been more effective than the half-assed development he got.

This is a flawed film, but most of its flaws are honestly made; there is also a good deal here to recommend it. The movie is certainly topical, and while the ending is rather dramatic, it is nonetheless a sad fact of life in the trans community. I look forward to bigger and better things coming from the filmmakers as well as the cast.

REASONS TO SEE: Covers issues of two groups that are badly discriminated against.
REASONS TO AVOID: Guevara’s line reading is fairly stiff.
FAMILY VALUES: There is profanity including gay slurs, violence, sex, nudity and some drug use.
TRIVIAL PURSUIT: 2018, the year this was filmed, was the deadliest year for transgenders ever; nearly all the victims were women of color.
BEYOND THE THEATERS: DirecTV
CRITICAL MASS: As of 9/2/20: Rotten Tomatoes: 92% positive reviews, Metacritic: 55/100
COMPARISON SHOPPING: Lingua Franca
FINAL RATING: 6.5/10
NEXT: Bombardier Blood