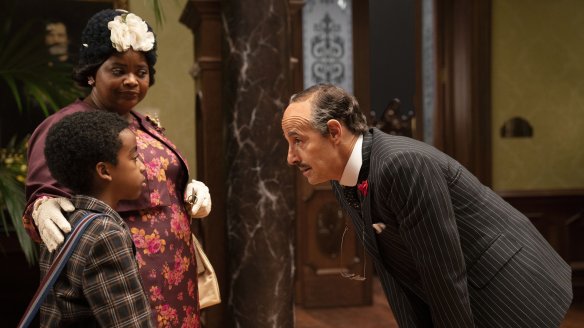 Someone itches to find some witches.

Most people remember author Roald Dahl for Willy Wonka and the Chocolate Factory or James and the Giant Peach, but he also wrote a book called The Witches which back in 1990 was turned into a movie by director Nicholas Roeg. Thirty years later, a different Oscar-winning director takes a crack at it.

A young boy (Bruno) – whose name we never know but is referred to in the credits as “Hero Boy” – is orphaned in a car crash and sent to live with his down-to-earth Grandma (Spencer) in Alabama. She is loving and hipper than most grandmas, dancing to the strains of the Four Tops’ “Reach Out (I’ll Be There)” which sets the tone as definitely the late Sixties in a place where it wasn’t especially pleasant to be African-American.

Grandma as a young girl had discovered that witches are real – demonic creatures that masquerade as women but are actually completely bald, so they wear wigs that give them nasty rashes on their scalps; they also wear gloves because their hands possess only three fingers that end in razor-sharp claws. Their feet are square with a single toe, and their mouths are extra-wide and full of wickedly sharp teeth. When the grandson has an encounter with one in a store, Grandma realizes she can’t protect him and decides to take him on a vacation to a swanky hotel, where the witches can’t find him, right?

You see, witches also hate children with a passion, complaining that they are noisy (true), selfish (true) and smell like dog poo (wellllll…some do, some don’t). The Grand High Witch (Hathaway) who turned Grandma’s closest friend (Prince-Asafo) into a chicken, has a plan to rid the world of kids once and for all. She’s going to reveal her evil plan to her colleagues at a witches convention (disguised as a do-gooder organization dedicated to the welfare of children) – which as bad luck would have it, is taking place at the very hotel where Grandma and her charge have fled to.

More I will not reveal about the plot; if you’ve read the book, suffice to say that this version of it follows the plot of the literature pretty closely, certainly more so than the 1990 film. If you’re not familiar with it, then it’s best not to reveal too much because that will spoil the fun, and above all, that’s what this movie is – fun.

Hathaway chews the scenery with grand gusto, deliciously, delightful evil with a mock-Eastern European accent that makes her somehow even creepier. Much of her facial features and body has been redesigned digitally, giving her the look of a witch while remaining still recognizably Anne Hathaway. She camps it up quite a bit, but the role definitely calls for it, and Hathaway delivers. We sometimes forget that the woman is a fabulous actress who is capable of doing just about anything she wants to in front of the camera. Another reviewer posited that she was acting as a kind of surrogate Betsy DeVos, proclaiming she’s doing everything for the good of children while in reality she was out to cause harm to them, particularly those who are poor or members of minorities. That reviewer for Consequences of Sound wasn’t wrong, I think.

Spencer is a diametric opposite; she’s the loving, warm embrace that we need watching the boy suffer the loss of his parents, withdrawing into an uncaring shell; not eating, not engaging, not smiling ever. She gradually wins him over and brings him back to life, and those scenes early on in the film are among the best in the movie.

Zemeckis is a big believer in CGI and true to form, he employs a whole lot of it here. Some works, but there’s some that doesn’t. There are some talking mice in the movie that look awfully cartoonish, like they stepped out of a Looney Toon, and that doesn’t do the movie any favors.

The big question here is how appropriate is this movie for kids. Yes, it’s based on what is ostensibly a children’s book, but there are some scenes that are going to absolutely terrify the more impressionable wee ones in the house. Parents might want to give the movie a bit of a preview before determining if their kids have the maturity to handle it. Also, the first part of the movie concerns how the grandson deals with the death of his parents in a fairly realistic manner, which might also upset kids who are sensitive. Older kids, say into double digits on the age scale, or particularly mature young ‘uns should be able to handle this.

As mentioned in the Trivial Pursuit entry, this was supposed to be one of the fall tentpoles for Warner Brothers this year, but obviously COVID made the studio revert to Plan B. The movie recently debuted on HBO Max here in the States but in other countries that have handled the pandemic somewhat better than we have will be able to see it in theaters as soon as this weekend. Enjoy.

REASONS TO SEE: Outstanding performances by Hathaway and Spencer.
REASONS TO AVOID: Occasionally too cute for its own good.
FAMILY VALUES: This is some mild profanity, some scary images and difficult thematic elements.
TRIVIAL PURSUIT: Originally set for theatrical release in October, the release date was moved out due to the pandemic, until Warner Brothers decided to send it direct to streaming on its HBO Max service.
BEYOND THE THEATERS: HBO Max
CRITICAL MASS: As of 10/26/20: Rotten Tomatoes: 51% positive reviews, Metacritic: 46/100
COMPARISON SHOPPING: Hocus Pocus
FINAL RATING: 6.5/10
NEXT: Six Days of Darkness continues!