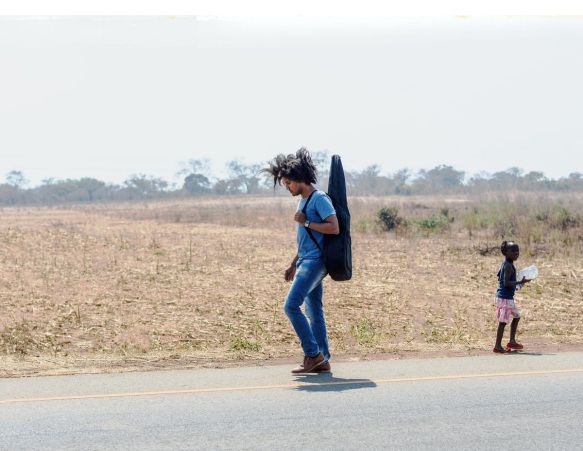 The road of an activist can be long and lonely.

The politicization of illness didn’t start with COVID-19. In the 80s and 90s, HIV and AIDS carried with it a stigma that the person afflicted with it was essentially getting what they deserved because they were having sex. Never mind that sexual intercourse isn’t the only way to contract the virus; never mind that not everyone who contracted the disease was gay. The stigma remains associated with the disease to this day, particularly in Africa where homosexuality is much more of a taboo.

Thomas Muchimba Buttenschøn was born of a Zambian mother and a Danish father, and was born in Zambia. His parents discovered after his birth that they both had AIDS; they returned to Denmark which had a better health care system, but Thomas’ mother died in Zambia while visiting her family there, and his father died in Denmark shortly thereafter. Worse yet, Thomas was born HIV positive. His prospects for a long life seemed unlikely at the time.

But Thomas is 35 years old now with a wife and son of his own, and a thriving musical career.  Neither his wife nor his son have HIV or AIDS; medical advances have made it possible for Thomas to live a normal life, with the help of a drug regimen that he adheres to without fail. However, not too many people realize that AIDS is no longer the death sentence it once was. Thomas returned home to Zambia to spread the word that AIDS can be overcome, and to help ease the negativity surrounding those afflicted with the disease.

It’s not an easy task. Cultural taboos that go back thousands of years are difficult to overcome. On top of that, Zambia is a heavily Christian nation and the more evangelical elements have turned their backs on those suffering with the disease. Given that those who are diagnosed HIV positive are often shunned by their families and communities, it’s no wonder that the disease often goes unreported, leading to a more virulent spreading of the disease in Zambia.

Thomas’ mission is to educate and inform. Linking up with other musicians such as Danny Zaya, and Sister D Zulu who have been AIDS activists for years, even when it was unpopular to do so. Their songs were often banned by the government, although those anti-AIDS bans are starting to ease now. Thomas and his fellow musicians decided to put on a concert in the village where his mother was born – and eventually died. The price of admission; get tested.

Weaved in with the locals is Thomas’ own story which is at times, heartbreaking. His father was the subject of a news story in Denmark; he would be dead less than a year after it aired. But the baby-faced Thomas, while clearly affected by the tragedy, also seems to have moved on from it, having been raised by foster parents who helped him overcome the bleak outlook his father had – which, at the time, was understandable – and grow to live a full life of his own.

The documentary is very informative about the current state of HIV/AIDS and how it is regarded in Africa. Judging on posts I’ve seen on social media here in America, I would venture to see that ignorance about AIDS isn’t limited to that continent at all. Many Zambians were startled to discover that the drugs that have given Thomas a normal life are available there for free, given away by the government seeking to end the epidemic.

There is a lot of music in this documentary, and it is a bit surprising; the music is pretty Western-sounding to my ears. This isn’t a music documentary, however, despite the fact that musicians make up the central focus in many ways; this is about fighting a disease and more to the point, ignorance of that disease which is perhaps deadlier than the disease itself. That is true of any disease, including the one affecting our country right now.

REASONS TO SEE: Glimpses of other cultures are always welcome.
REASONS TO AVOID: Approach might be a little too low-key; needs some urgency.
FAMILY VALUES: There is some brief sexuality and adult themes.
TRIVIAL PURSUIT: The HIV/AIDS infection rate in Zambia was 14% when this was filmed in a country of 17 million people; the rate is likely much higher given the reluctance of people to report their condition as detailed in the film.
BEYOND THE THEATERS: Amazon, AppleTV, Fandango Now, Google Play, Microsoft, Vudu, YouTube
CRITICAL MASS: As of 12/8/20: Rotten Tomatoes: No score yet, Metacritic: No score yet
COMPARISON SHOPPING: Amandla! A Revolution in Four-Part Harmony
FINAL RATING: 6.5/10
NEXT: Elyse