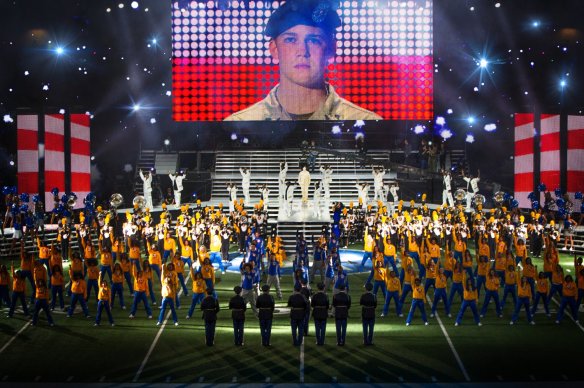 It is often easy in war to identify a hero. The crucible of battle can bring out the highest of human qualities as well as the lowest. But what happens to heroes after their moment?

Billy Lynn (Alwyn), a 19-year-old Texan from a small town, is finding out. During a skirmish with his Bravo company in Iraq, he sees his Sgt. Shroom (Diesel) go down after being hit. Without thinking, he goes out to defend his fallen comrade who has been a bit of a mentor to the young boy, taking on an Iraqi insurgent in hand-to-hand combat. The episode is captured on video and goes viral.

The Bravo company is sent home on a publicity tour, culminating in a Thanksgiving Day appearance at a halftime show at the Dallas stadium for their pro football team, whose smarmy owner Norm Oglesby (Martin) professes great admiration for the Bravos while at the same time trying to figure out a way he can exploit their fame for his own purposes. The company is presided over by Sgt. David Dime (Hedlund) who is a bit more worldly and protective of his boys, while a Hollywood agent (Tucker) tries to get the Bravos a movie deal for the rights to their story.

Set during the day of the big halftime show, Lee’s film captures the bonds of brotherhood between the soldiers who are increasingly disconnected with the well-meaning but clueless civilians who “support the troops” but don’t have any idea what that entails. Alwyn, a British actor, pulls off the American accent without a flaw and captures Billy’s jarring juxtaposition between worldly warrior and naïve 19-year-old. It’s a scintillating performance that hopefully will be the first of many for a young actor with a whole lot of upside.

His conscience is his sister Kathryn (Stewart) whose liberal anti-war aphorisms meet with disapproval in the Lynn family who are solidly behind the war. Perhaps the face of the attitude towards his heroism comes from cheerleader Faison (Leigh) who is more interested in her own image of him as a Christian soldier than in the real Billy Lynn.

Based on a book by Ben Fountain, the movie feels much of the time that it is trying to take on too many ideas in a superficial manner without settling on anything concrete. The overall impression is of a film without a message although it desperately is trying to get something across. I’m a big Ang Lee fan but this isn’t going to go down as one of his best.

Much has been made of the technical aspect of the movie; it was filmed at a higher frame rate – about five times faster – than standard movies. Unfortunately, few theaters are equipped to show the movie this way, although I understand that the effect was impressive and completely immersive. Perhaps someday we’ll get to see it the way it was intended but the 2D was satisfactory in terms of the images.

Much like this review, the film is scattershot. There’s a cohesive whole to be had here but it eludes the filmmaker; just when you think the movie is about to gel, it goes off on another tangent or several of them. This is the most unfocused I’ve seen Lee as a filmmaker in his entire career. This is one of the year’s biggest disappointments.

REASONS TO GO: Some strong performances and content make this worthwhile.
REASONS TO STAY: A feeling that the film is all over the place makes it not.
FAMILY VALUES:  A whole lot of salty language, some scenes of war violence, some sexual content and brief drug use.
TRIVIAL PURSUIT:  Mason Lee, who plays Foo, is Ang Lee’s son.
CRITICAL MASS: As of 12/6/16: Rotten Tomatoes: 45% positive reviews. Metacritic: 53/100.
COMPARISON SHOPPING: Stop-Loss
FINAL RATING: 6/10
NEXT: Origin