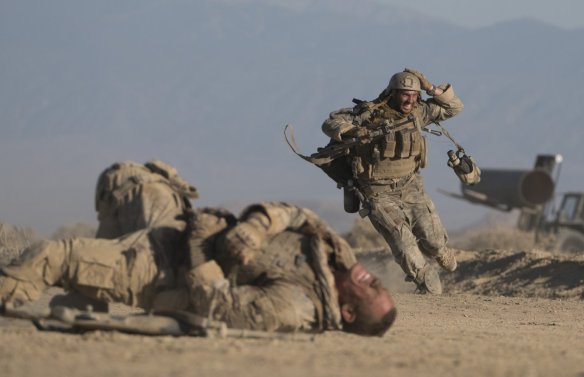 Everything is more intense when you’re under fire.

In the desert, there is not much beyond scorching sun, deep blue sky and wind-whipped sand. It is dusty, hot and dry. Humans can survive there but far from comfortably. It is a terrible place to have a war.

And yet we’ve spent the last 16 years and counting in the desert at war. In this movie, it is 2007 and the war in Iran is “winding down” as the opening credits inform us. Remembering that this is the era of the infamous “Mission Accomplished” faux pas of George W. Bush, the movie begins on a wry, humorous note. We see that there are two Marines – Shane Matthews (Cena), a sniper and “Eyes” Isaac (Taylor-Johnson), his spotter – observing a pipeline construction site. Their banter is the kind between brothers or bar buddies; occasionally vulgar, snarky for certain but affectionate nonetheless.

All the men working on the pipeline are dead. The spotter thinks they are all head shots; the sniper is not so sure. If the former is right, then there is a highly skilled sniper in the neighborhood. If the latter is correct, then it was likely an insurgent patrol that surprised the construction workers and is likely long gone. The two men have been sitting in the hot son in full camouflage for 22 hours. Matthews has about had enough. There has been no movement. Nobody is there.

He heads down to the construction site to make sure and to request that the two be picked up and returned to base. There is a crack-thump and down goes the Marine. His buddy runs out to help him and crack-thump he’s hit as well. Isaac is forced to take shelter behind a crumbling wall, one which is barely standing on its own and threatens to come down on top of him if the wind gets too high.

He is forced to take the bullet out of his own leg in a squirm-inducing moment and then needs to look to the survival of himself and his buddy who appears to be unconscious or dead. The outlook is grim; the radio antenna has been damaged so all he can pick up are people who are close by; his canteen has also been shot and the water drained out. The dehydration combined with his serious wound is likely to kill him before base camp comes looking for them.

At first things take a turn for the better; Isaac gets in contact with a patrol team who must be close by but when they keep asking for his exact position, he begins to get suspicious, suspicions which are confirmed when the man on the radio tells him that he is the sniper who has shot him. The two strike up a conversation; it turns out that the sniper is the legendary Juba, who has 75 confirmed American kills to his credit. He seems eager to get to know Isaac who wants nothing more than to figure out where Juba is so that he can shoot him.

It becomes a game of cat and mouse with Juba threatening to shoot off the face of Matthews if Isaac doesn’t answer the questions that Juba poses, the most important being “Why are you still here?” That’s a question Americans have been asking as well.

Liman has constructed a taut three-person movie that keeps the viewer on the edge of their seats from minute one. It’s a short but sweet movie that doesn’t overstay its welcome and although there is a bit of a lull in the middle, mostly keeps the tension at a high level throughout. The movie is shot so well you can almost feel the sand getting in your eyes.

There is an authentic feel to the film from a military standpoint. I’m not ex-military myself but the characters act as I would think well-trained Marines would; they are imperfect and have their moments when they let their guard down but nonetheless they (particularly Taylor-Johnson) act with a sense that the training has kicked in as the situation is assessed, immediate needs seen to and a plan to get out of a bad situation put together. We see all of this from the comfort of our theater seats (or our living room sofa as the case may be) and likely feel quite grateful that it is not us cringing beneath that poorly constructed wall.

Cena spends most of the movie lying face down in the dirt but this is maybe his best performance of his fairly brief acting career. The WWE superstar has always impressed me with his screen presence but over time he has developed some real acting skills. I’m not sure he’s at the level of a Dwayne Johnson yet but as wrestlers turned thespians go, he certainly has the tools to construct a pretty satisfying career and maybe more down the line.

Taylor-Johnson has been in my opinion on the fringe of breaking it big with some fairly good performances in fairly good movies, but nothing has really brought him to the A-list quite yet. Much of the film rests on his shoulders as he is interacting with a voice on his radio more than with a live actor as Cena is mostly unconscious in the film. That takes a lot of chops and fortunately Taylor-Johnson has them. We shall see if this finally puts him over the top and gets him that role that will elevate him into the next level.

This is a movie in which sound plays an unusually important part and Liman’s sound team comes through in spades. From the sound of the wind whipping the sand around, the crack-thump of the gunshots and the metallic bangs of the construction site, the sounds make the movie. We really don’t have a lot to look at other than endless vistas of sand and the half-finished construction site. We need the additional stimulation and we get it.

Amazon Studios helped to produce this, likely with a goal of getting their Prime users to watch this at home, but this is one of those rare movies that I think despite having an intimate setting should be seen in a theater where the outstanding sound work and impressive visuals will work best. This hasn’t gotten a ton of buzz amongst indie film fans but it deserves some. This is a very strong movie that is worth seeking out and at least here in Orlando is playing in enough theaters that there’s no excuse not to find it.

REASONS TO GO: The expected route is not taken. Taylor-Johnson and Cena; who knew? There is a lot of authenticity to this film.
REASONS TO STAY: The middle third is a little bit slow. Juba as a disembodied voice lacks menace.
FAMILY VALUES: There is plenty of salty language and a fair amount of war violence.
TRIVIAL PURSUIT: Nicholas Irving, the Army Rangers sniper who served as technical adviser for the film, was nicknamed “The Reaper” during his tour of duty.
CRITICAL MASS: As of 5/12/17: Rotten Tomatoes: 65% positive reviews. Metacritic: 58/100.
COMPARISON SHOPPING: Phone Booth
FINAL RATING: 7.5/10
NEXT: The Last Shaman