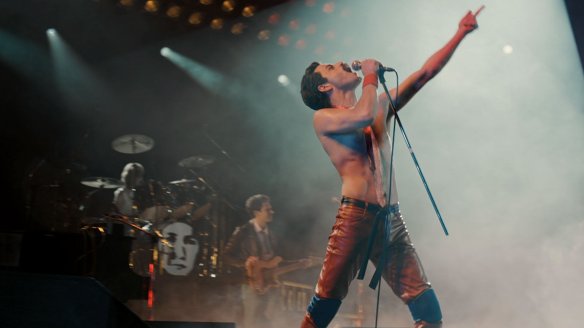 Freddy Mercury in his element.

For an outsider, Freddie Mercury became symbolic to a lot of people. To people of my generation, he was a peerless rock star, perhaps the very embodiment of one. To music historians, he brought grand opera into rock and roll, with all the silliness and grandeur that implies. To the LGBTQ community, he was one of their own who made it big on his own terms. He was the voice of his generation.

Of course, to play such a bigger-than-life performer, you’re going to need a bigger-than-life performance and fortunately, that is delivered here. Rami Malek, best-known at the time for the TV series Mr. Robot, won the Oscar for his portrayal of Mercury and justifiably so – it was one of the best performances of the decade. Malek inhabits the role completely and gets every little nuance right. It is as close to having Freddy back as we’re likely to get.

That said, the movie isn’t without its problems. Like a lot of music industry biopics, it tends to focus on the sensational – the parties, the lifestyle, the drugs and the sex – and while not ignoring the creative process completely, at least gives it less attention than it deserves. It’s easy to be caught up in the excesses, and yes, the band was known for them, but that wasn’t all they were.

They were (and are) also extraordinary musicians and incredibly creative, as the music attests. The film uses the music of Queen to great effect. The re-creation of their triumphant Live-Aid performance in 1985 after an absence of several years opens and closes the film. Many believe that it was one of the best rock and roll performances of all time and they’re not wrong.

Queen is remembered for merging rock and roll and opera, with all the silliness and high drama that it entails, so perhaps the movie was destined to have its share of drama – director Bryan Singer was fired and the film was finished by an uncredited Dexter Fletcher late in the process – but for those who loved Queen (like Da Queen, for example) this is absolutely required viewing. The real challenge for any musical biopic is that it have appeal not just to the main fan base of the act, but also to casual fans as well. I believe even those who weren’t necessarily Queen devotees will get something out of this film, if nothing else Malek’s incredible performance.

REASONS TO SEE: Malek gives the performance of a lifetime. Uses the music of Queen magnificently.
REASONS TO AVOID: Sometimes, a little gossipy.
FAMILY VALUES: There is a bit of profanity, plenty of sexuality, adult thematic content and some drug use.
TRIVIAL PURSUIT: Malek wore a prosthetic device to re-create Mercury’s famous overbite. After shooting concluded, he kept the prosthetic and eventually had it cast in gold.
BEYOND THE THEATERS: Amazon, AppleTV, Fandango Now, Google Play, HBO Go, Microsoft, Movies Anywhere, Redbox, Vudu, YouTube
CRITICAL MASS: As of 1/20/20: Rotten Tomatoes: 61% positive reviews: Metacritic: 49/100.
COMPARISON SHOPPING: Rocketman
FINAL RATING: 7/10
NEXT: Church and State