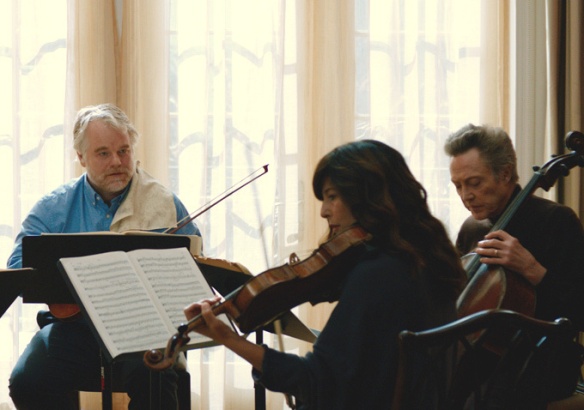 A string quartet is more than the sum of its parts. The members must learn to play not only with great discipline and technical expertise but must learn to anticipate the play of the other members. Only when they are thinking about one another can they truly harmonize beautifully.

The Fugue Quartet began life as a pioneering group of young musicians looking to push the boundaries of classical music and have largely done that. They approach their 25th anniversary with plans for another major tour spotlighting Beethoven’s Opus 131, one of the most difficult pieces for quartets due to the pacing and the length (seven movements instead of four). In fact, the instruments often start to go slightly out of tune by the seventh movement, forcing the musicians to compensate for each other.

But the well-oiled machine that is the Fugue is about to face their biggest crisis. Cellist Peter Mitchell (Walken), the heart and soul of the group, has been diagnosed with Parkinson’s and won’t be able to play for much longer. He determines the first concert of the 25th season will be his farewell.

The news hits the other member of the quartet hard, particularly Juliette Gelbart (Keener), the viola player who was literally raised by Peter and Miriam (van Otter), the opera-singing wife of Peter who had passed away the year previously. The news also sets in motion a number of events, starting with Juliette’s husband Robert (Hoffman), the quartet’s second violin who has chafed under the autocratic rule of first violinist Daniel Lerner (Ivanir), the technically perfect first violin who likes things the way they are – and is even trying to convince Peter to stay.

Peter’s mind is made up though and he has thoughts of his replacement (Lee) although he’ll have to pry her away from the leader of her trio (Shawn) who isn’t inclined to let her go. In the meantime Robert has announced that he no longer wants to play second violin exclusively; he wants to alternate in the first chair. Daniel is having none of it and to Robert’s dismay and frustration, Juliette supports Daniel and not him.

This leads to a particularly dumb move on Robert’s part which sets in motion events that will pull Robert and Juliette’s daughter Alexandra (Poots) who is also a musician, and threaten to tear apart the quartet before they make it to the farewell concert.

First-time filmmaker Zilberman gets to work with an extraordinary cast and he makes the most of it; this might well be the most well-acted movie over all I’ve seen this year. Walken is on a role of really good performances and he continues it here. But it’s Hoffman who really impresses. This is one of his best roles in the past five years. At first you think Robert is being petulant and childish but as the movie progresses you realize that this is a man who has been second fiddle in every aspect of his life, not just in the quartet. It’s heartbreaking to watch him self-destruct.

Poots is a revelation. I’d thought her just a pretty face more or less but she has a scene with Keener in which long-percolating resentments between mother and daughter finally see the light of day and as such resentments often are it’s ugly and captivating.

The movie isn’t what you’d call fast paced; although the Beethoven piece is rousing and lively, the music that moves through the movie is the current of these musician’s lives. They live quiet, comfortable lives that are filled with the most beautiful music on earth. Heck, they’re responsible for making a lot of it so why not?

This is a movie about rhythms interrupted and so it might at times not sit well with those who like their movies to be more tranquil. It is also quite predictable (does anybody not see what Danny’s character does coming from nearly the beginning of the film?) and at times has that snooty pretentiousness that you only find in the fine arts.

I really liked this movie. It takes a look at the discipline that goes in to being a world class musician, and at how being part of a group – not just in rock and roll or even just in classical music but ANY group – requires the egos be put aside, that the focus is and always must be the good of the whole over the needs of the individual. It is not natural for human beings to think that way which makes it a minor miracle when they do.

REASONS TO GO: Plenty of good performances both musically and from the actors.

REASONS TO STAY: Predictable in places and pretentious in others.

FAMILY VALUES:  There are some bad words scattered here and there and a few scenes of sexuality.

TRIVIAL PURSUIT: At one time Ethan Hawke was cast in the film but had to withdraw due to scheduling conflicts.

STRING QUARTET LOVERS: The actors received rigorous training in how to properly play their instruments but the music you actually hear is from the world-renowned Brentano Quartet.